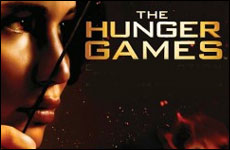 The new film has me thinking about Passover.

This is the poor man’s bread. All who are hungry, let them come and eat
-- Hagaddah.

Watching The Hunger Games reminded me of the upcoming holiday of Passover. And not just because I was hiding out at the movies to get out of helping.

A lot of the themes are there: Poor men, bread, hunger, sacrifice, freedom, an evil government ruled by a Pharaoh, strange facial hair, and people owning people. (One character – a bakery worker named Peeta -- says, “I just want to show them that they don’t own me. Even if I die, I just want to be me.”) And as with the story of Passover, the ending feels rushed. But there’s more.

The Hunger Games is based on a best-selling young-adult book series. Kind of like Twilight, but with shirts. It’s about a society called Panem (Latin for “bread”) that consists of a lavish Capitol surrounded by 13 powerless satellite districts (Who knows 13?) that are cut off from each other, each of which is in charge of living in serious poverty and producing something essential for the survival of the Capitol – coal, plants, energy, fish, wigs, face powder, etc. The story takes place in the far future, and if the movie is any indication, all of the bad hairstyles and weird clothing that people are wearing are just going to keep going downhill from here, even as our entire country runs into the ground and gets replaced. Apparently, all the weird names that people are giving their kids have caught on, to the point where regular names have been pretty much phased out. (The characters have names like Katniss and Peeta and Rue and Cinna and Cashmere. The closest to a regular name is “Haymitch”, which sounds like a greeting.)

At some point, the districts rebelled against wearing stupid clothing, but they were quickly subdued (District 13 was even destroyed). So to demonstrate its power and stem any rebellion in the future, the government came up with an idea: Reality TV. Every year, two children from each district are selected by a lottery to participate in the “Hunger Games,” which are not as fun as they sound (even with the word “hunger” stuck in there). The children are shoved into a huge forested arena and made to battle to the death on national TV, and the last child standing gets the honor of living out the rest of his/her life as a drunk that high society pretends to tolerate.

Bread and circuses. But these are not your father’s circuses.

The movie follows a competitor named Katniss, who volunteers in order to replace her 12-year-old sister, who would never stand a chance against the 18-year-old behemoths in the ring. Katniss does have some survival skills, particularly hunting, as it’s been her job to feed her family ever since her father died in a mining accident. Of course, she has no real interest in competing or killing anyone, nor do many of the contestants, who are only forced to, by circumstances manipulated throughout the games. The only exception is a group of “Careers” – kids who’ve trained for this “honor” their entire lives, and, right off the bat, make up an alliance in which they all pledge not to stab each other in the back until the very end, or if for some reason they’re mad at each other, whichever comes first.

The theme of the movie, though, is Katniss’s realization that even though she’s a strong competitor on her own, in order to survive in a game where the gamemakers keep changing the rules and the terrain and the weather conditions to force the kids to fight, she is much stronger when working with others. She’s going to have to make friends. Not fake friends, like the alliance, but real friends. She finds that in order to keep her humanity in the face of the games, it’s not just about trying not to kill the others unless you have to. In a world where inhumanity is killing others for sport, does humanity mean simply not killing others? Or does it mean working with them and playing off their strengths?

Using this philosophy, she teams up with Rue, a small girl from District 11 who has an amazing knowledge of plants – how to climb them, which ones can heal wasp stings, and which ones make the best fires – and with Peeta, the boy from her district, who brings with him a knowledge of decorating cakes. She learns how to get viewers to like her, and she learns how to get sponsors, who have the ability to send her supplies over the course of the game. (For example, they can drop a bowl of soup in on a little parachute.)

The slogan of the Hunger Games is, “May the odds be ever in your favor.” If you go in as a team, your odds are much more favorable.

All this leads to the end, SPOILER ALERT when she and the only other surviving player are ordered to battle to the death, and they decide instead to commit suicide together rather than give the Capitol a clear winner. And by doing so, the entire system collapses, and for the first time, two people are declared “winner.”

We may be strong, but we are never stronger than when we’re working together.

The Capitol isn’t set up to deal with this, because that’s how the Capitol works – it tries to keep people from cooperating and working together. When you’re trying to keep a population in control and they severely outnumber you, your best strategy is to do everything you can to keep them from realizing this. You keep them cut off from each other and pit them against each other by manufacturing horrific annual wars. Make them fight one another so they don’t fight you. Give them an enemy. The government knows that each district has a resource or talent – energy, electronics, coal, weapons, vehicles, etc. – and if they combined their resources, it would mean the end of the government.

Pharaoh had a similar concern. He arranged a secret meeting of his advisors, which we know about because it’s right there at the beginning of Exodus, and he said, “The Jews are outnumbering us. Let’s make them build stuff for us, keep their families separated all the livelong day, and pit them against each other.”

When you’re a slave, life is about self-preservation. The Egyptians forced Jews to be taskmasters over other Jews, keeping them at odds with each other rather than turning toward the Egyptians. And when Moses asked two Jews why they were fighting, they turned on him as well.

And Phase 2 of Pharaoh’s plan was to sacrifice children. But one child was put into the Nile voluntarily, and that was Moses.

In the end, the Jews had to come back together as a family before they left. They had to sit down to a meal -- as a family. Share a sheep. As slaves, the Jews were all individuals, but in order to survive in the wilderness, that wouldn’t work. Over and over, all the commentaries point out that the Paschal lamb is a symbol of unity – it’s part of a flock, eaten in a group, and the structure of the meat has to be retained rather than broken up.

We may be strong, but we are never stronger than when we’re working together. Everyone has something to bring to the table. You just have to sit down at the table with them and find out what it is.

The Passion: A Historical Perspective
Were Adam and Eve Jewish?
How I Learned to Love the Multiverse
10 Big Jewish Inventions
Comments