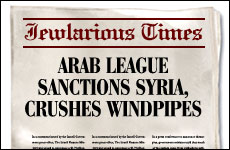 “The press in the Arab world is free to criticize Syria -- and only Syria!”

Jewlarious Satire: In an unprecedented move, the Arab League has announced that it will impose a battery of sanctions on Syria, the first time the League has ever taken such action against a member state. Speaking to the media after the vote, the Arab League’s Secretary General Nabil Alarabi, while standing on the windpipe of a Moroccan university student, told the media, “I am here as the representative of Somalia, Sudan, Saudi Arabia and many other Arab democracies, demanding an end to oppression of the Syrian people and for the Syrian government to return to the longstanding tradition of all Arab governments, wherein each leader courteously bakes a cake and knits a blanket for each of its citizens.”

Egypt considers placing sanctions on itself.

When pressed by the Moroccan student, who seemed to murmur, “Does this mean that there will be freedom of the press? I am losing feeling in my right hand,” Secretary General Alarabi replied, “Of course! From Algeria to Djibouti, the press in the Arab world is free to criticize Syria and only Syria! Why wouldn’t they be?” Secretary General Alarabi then added, “Incidentally, sir, I will not be taking any questions from the press.”

After some confusion, the Moroccan student clarified, “I think my kidneys have shut down. I am not a member of the press. I am a student. Still, I do have an important question: will sanctions be forthcoming against Egypt, after 38 people were killed last week? Egypt did sanction Syria for killing its citizens, right?”

Secretary General Alarabi replied, “As far as I know, the Egyptian interim government is too busy to impose sanctions on itself for murdering its own citizens. I am told that any and all murders conducted by Egyptian governments from the pharaohs until today are simply a multi-generational aberration – hey, that almost rhymes. Not to worry, Egypt has promised that once it transition to democracy, no citizens will be killed and everyone will get a pony.”

The United States State Department stood by cautiously supporting the sanctions, but asking Secretary General Alarabi to remove his foot from the student’s windpipe. Secretary of State Hillary Clinton told Meet the Press, “We are pleased that the Arab League is continuing its longstanding program of caring for its citizens across its oppressive regimes. We patiently ask for Secretary Alarabi to remove his foot from the windpipe of this Moroccan student, who seems to have fifteen seconds to live.” Secretary Clinton then gave the Arab League two weeks to decide whether or not Alarabi should remove his foot.

WouldJew Believe #12
The Promise Of The Land
Which Chat Are You On?: Parshas Behar/Lag Ba’Omer
Do You Like Slow-Cooked Food? Thank the Jews
Comments
MOST POPULAR IN Funny Stuff
Our privacy policy