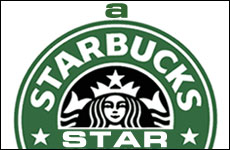 Penning a quote on a Starbucks cup has been my brush with fame.

I didn't want to draw attention to myself, but my behavior was decidedly peculiar and bound to attract attention. I walked into a Starbucks, but instead of waiting patiently in line for an organic, Ethiopian Antigua Supremo (refined with vibrant flavors and refreshing acidity), I strode to the head of the line, where I began to rifle through the stack of "grande" sized cups on the counter. I rejected the first one I pulled, and the second, but eagerly commandeered the third, the sixth and the ninth cups in the stack. Eureka! I had finally found them!

As I turned to leave, an actual paying customer (unlike a cup pirate such as myself) who had been watching me with suspicion, shouted, "Hey! What are you doing, taking those cups!" Did Starbucks have undercover security?

I explained that I was only taking cups with my own quote on them.

"What do you mean, your quote?" he demanded, yanking a cup from my hand to examine it. The quote said: "Have you noticed that dogs are the new kids? You take a walk with your kid and your dog, but nobody says, ‘What a cute kid!' Instead they say, ‘What a cute dog! What's his name? Is he a rescue?' Maybe if I put a collar and leash on my kid someone will notice her." The quote was meant to be funny, but this guy wasn't laughing. All he said was, "You mean you're Judy Green?"

"Gruen. Yes, I'm her." I wanted to get out of there. I had a speaking engagement in twenty minutes and I was worried that my make-up might begin to melt. That would create a bad visual.

Again I turned toward the exit, but my hope for escape was premature. "Hey Bob!," Mr. Buttinsky said to his pal, "This lady says she's Judy Green, and this is her quote on the cup!"

"This lady says she's Judy Green, and this is her quote on the cup!"

I groaned inwardly as Bob marched over to examine the cup and my spurious claim of authorship of its quote. I wanted to evaporate like the mist on a caramel macchiato. If this was a tiny taste of the celebrity life, Jennifer Aniston could have it, and the Dolce & Gabbana sunglasses, too. All I wanted was to write my columns and books and collect the occasional paycheck for them. Now I had driven thirty miles to find my cup (okay, I had to be in the area anyway for the speaking engagement), and fate had placed me in the only Starbucks store out of 57 billion where customers were demanding I show photo ID before I could take two empty paper cups.

The customers peppered me with questions: How'd I get a quote on there? Was I famous or something? They were standing entirely too close, and I took a step back. While they were still shouting questions, I bolted.

I made it just in time for my speaking engagement, which was a complete bust. By the time I loosened up the audience and they were enjoying deep belly laughs, it was over. Not only did they leave without buying my books, they didn't even notice my Starbucks cups.

When I got home, I burst into tears. Safe in the friendly confines of my family, I felt free to unleash my deep disappointment over my evening with the botox brigade (they may have wanted to laugh, but I have heard that aggressive cosmetic procedures can make smiling a mite difficult).

However, my family misinterpreted my emotions.

"Wow! Mom found her Starbucks cups!" one of my kids gushed, herself getting teary-eyed. "Mom's famous!"

Everyone gathered round to look at the cup, marveling as if seeing the crown jewels in the Tower of London. It wasn't so long ago that this level of awe was reserved for real philosophers, such as Moses or Aristotle. Today, all you need to do is write a two-sentence comment that can fit on a throwaway coffee cup and suddenly you're a somebody! Maybe in this age of instant messaging, people don't have time for longer philosophizing. You know, like the kind that might require a short book to explain.

Today, all you need to do is write a two-sentence comment that can fit on a throwaway coffee cup and suddenly you're a somebody!

I knew my fifteen minutes of fame would probably last only eight minutes, so I decided to try to enjoy it. After all, the build-up had lasted for many months and had provided ample conversational fodder around the house. One afternoon, as I fantasized about the quote propelling sales of my new book to Harry Potteresque proportions, one of my teenager's friends said to me, "That's so cool, Mrs. Gruen. Try not to think about five million people throwing your name and your quote into the trash when they're done with their coffee." Until that moment, I had never visualized the mass destruction of my cups in just that manner. This is one of the benefits of having children: they keep our egos in check.

Yet I have found it hard to fully enjoy my moment of Starbucks glory. This is because I have developed a strong resentment toward those paper sleeves that protect customers from burning their hands with a too-hot beverage. I used to think these sleeves were a clever invention. Now I see them for what they are: a sop to a nation that has gone soft, and worse, a barrier between the reading public and the authors who write little quotes to adorn Starbucks cups. This, in turn, endangers the earning capability of writers everywhere. It may even violate our First Amendments rights!

If we hadn't become a nation of wimps, these blasted sleeves would never have become necessary. In fact, this gives me an idea for a new Starbucks quote: "If you can't stand the heat, get out a Frappucinno TM instead."

Judy Gruen's new book, The Women's Daily Irony Supplement, was just published and can be purchased on Amazon.com here Read more of her work on www.judygruen.com.

If Christmas Songs were Written about Hanukkah

The 9 Best Moments in On Air Israel Defense