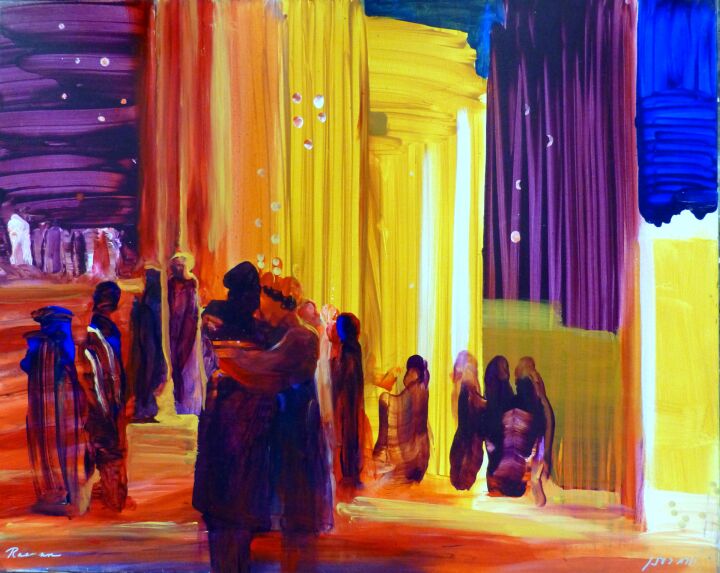 And [Joseph] fell upon the neck of his brother, Benjamin, and wept, and Benjamin wept on his neck. [Joseph] then kissed all his brothers and wept over them, and afterwards his brothers spoke with him. (Genesis: 45:14-15)

This painting captures the essence of Joseph's dramatic reconciliation with his brothers, highlighting his embrace with Benjamin, in which the two figures seem to merge. All the other figures are kept in the background to allow this reunion to be the focus of the picture.

When Joseph revealed his identity to his brothers, it was only after he embraced them and wept with them that they finally made peace with each other. The colors reflect a wide range of emotion. In contrast to the dark blue and the sonorous purples, the golden yellow and the reds reflect the transformation of this dark and complex situation.

In the background, strong, bold strokes of color suggest a Temple-like structure which illuminates the painting. Rashi explains that Joseph wept on Benjamin's neck because he saw prophetically that the first two Temples - standing primarily in the territory of the tribe of Benjamin ? would be destroyed; and Benjamin wept because he foresaw that the Tabernacle of Shilo, in the territory of Joseph's descendants, would also be destroyed. As the Children of Israel are about to descend into the darkness of Egypt, the light in the painting hints to a time when darkness and destruction will be transformed into peace and harmony.

Back to the Land
Blessing on Chewing Gum
Was Rahab a Prostitute?
Extras In Our Own Epic
Comments
More Articles on Vayigash
MOST POPULAR AT Aish.com
Baked Brik Recipe
Our privacy policy