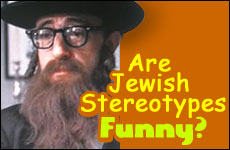 Sheldon excitedly told his parents he fell in love and was getting married.
"And ... just for fun, I'm going to bring over three women and you guess which one I'm going to marry." Mama and Papa agreed.

The next day he brought three beauties who sat on the sofa and chatted with Mama and
Papa over a little cake. After they left, Sheldon challenged, "Okay, which one am I marrying?"

"The one in the middle with the red hair," they replied together instantly.

It's that last one – when lobbed at all "Jewishy" material (especially on a Jewish humor site) – that makes the hair on the back of my neck stand up like a shaving brush.

To deny that "Jewish humor" exists, is like denying the Italians have a way with opera

Not long ago, I talked with two famous Jewish comics about Jewish humor. Both assumed "the basic" bewildered look. "Jewish humor? Is there such a thing? I don't know from this," they said, adding a little harumph. Odd, as each made a very nice living doing Jewish "shtick," assuming at times, a Yiddish accent while doing it. One even suggested there was no difference between Red Skelton and Jackie Mason. Twins separated at birth? I don't think so. Regardless of where each of us stand on "stereotypes," to deny that thousands of years of "Jewish humor" exists, is like denying the Italians have a way with opera, the French know from sauces, or happy Greeks break plates.

So why deny it? No doubt, they, too were quaking over the thought of being seen as stereotypical tummlers who spent their days chanting "Put your right foot in," at Grossinger's, circa 1960.

Before you "typical-negative-stereotype-that's-offensive-to-the-Jewish-people" holler, I agree. Some "jokes" that pass for Jewish humor are offensive. The old, "Why is a Jewish mother like a Rottweiler ...? ... Never lets go ... Bada Boom!" is not only offensive to Jews, it's offensive to funny people. Ditto for "Jewish Princess" two-liners. They're unkind, unintelligent, and unfunny. None of which resembles almost every Jew I know. (Oops! Again with the stereotyping.)

But when all funny references to our ethnicity lands on some lantspeople like radioactive fall-out, I think, "How sad." "Sad," when negative, unfair, and unbalanced stereotypes in the secular world have turned us away from claiming many of the magnificent, and yes, humorous characteristics we do share.

When a Judy Gold or Amy Borkowsky talks or writes about their Jewish mothers, when you watch Will and Grace, Seinfeld, Private Benjamin, The Way we Were, The First Wives Club, and yes, read my pieces on Jewlarious, these are informed, not by stereotypes, but by the truth of our experience. If that truth didn't resonate with enough of our readers or viewers, we'd be scoping degrees in Library Science.

So, in response, can we discuss a little?

The first major nationwide portrayal of Jews and Jewish life on radio, then television, was The Goldbergs, on the scene from the 1930's to the 1950's. A Yiddishe, I Remember Mama, there was Molly, the immigrant mama, her husband Jake, daughter Rosalie, son Sammy, and Uncle David. From their Bronx apartment, Molly, head out the window ("Yoo-hoo ... anybody?") shmoozed and fixed her family, and everyone in her orbit (Mrs. Bloom, and Seymour Fingerhood, for example) – in hysterical Yinglish, which became known as "Mollyisms."

"Vat's de matter, so late, Sammy? Let me look at your hands. Playing marbles, ha? A marble shooter you're gonna be? A beautiful business for a Jewish boy!"

"It's late, Jake, and time to expire."
"Mr. Policeman, officer of the law, your honor, could you be so kindly if you would inform me of the location of where is 14th St.?"

"You're breaking your father's heart."

Molly was a genuine American hit! The audience of Jews and non-Jews alike were laughing with, not at her, and few complained about the "typical-negative-stereotype-that's-offensive-to-the-Jewish-people" material that abounded throughout the show.

The answer to "How could this be?" is the key, I believe, in the Jewish humor vs. negative stereotype equation.

The brilliant Gertrude Berg (Molly) spoke for all first and second generation immigrants of every ethnicity. Jewish humor was a vehicle for common sense, wisdom, and compassion. America loved Molly – because Americans knew her, or someone like her. Whether they spoke Yinglish, Italiadish, or Eiredish, it was all Ameridish.

Her Jewish humor reflected the trials, hopes, and patriotism of many new post-war Americans. And made their journey, personal, amenable, and funny. Is there a better way to impart knowledge of the human condition?

We saw that our special ancient gift of fearless, satirical, wise, and yes, sophisticated Jewish humor, was the kishkes, of most humor.

Rather than being afraid, ashamed, or hollering over the "typical-negative-stereotype-that's-offensive-to-the-Jewish-people," we Jews should be proud. Proud, because since Molly, we saw how, in the right hands, the truth of our ethnicity, could entertain, inform, and universally resonate.

If it didn't, a Sid Caesar, Joan Rivers, or Jackie Mason would be playing to an audience of 50 at the Flatbush Knights of Pythias, The Producers would be a hit -- at the local JCC, and Seinfeld – wouldn't be, altogether.

Part two: American Negative Jewish Stereotypes: Where Did They Come From?
Or, My Son the Assimilator