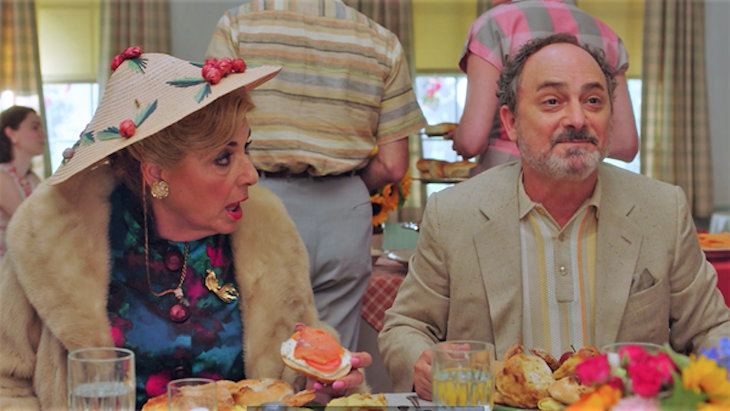 Moishe and Shirley Maisel epitomize the cultural stereotype of The American Jew: obnoxious, loud, and obsessed with money.

The entertainment world is filled with cultural stereotypes. Stepin Fetchit, the ugliest and most demeaning of black stereotypes, may have been innocently intended to amuse white folks, but in retrospect that character was deeply abhorrent and painful to African-Americans and was justly retired as society grew more racially sensitive. 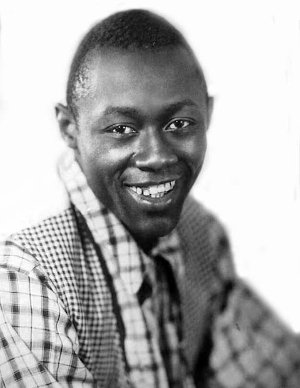 The ascendant #metoo movement is a constant reminder that the cliché of the Dumb Blonde has also worn out her welcome. Stereotypes – particularly in comedy – eventually grow tiresome and are consigned to the Hokum File, hopefully never to be seen or heard from again. And yet, Amazon’s hit comedy, The Marvelous Mrs. Maisel, traffics in Jewish tropes that are often deeply troubling, and indeed should have been retired long ago.

I’m a big fan of TMMM. The writing is often very funny, if occasionally anachronistic. I love the central conceit of a nice, upper middle-class Jewish girl in the late 50s – early 60s becoming a proto-feminist stand-up comic at a time when the profession was mostly populated by middle-age male hacks. As portrayed by the gifted Rachel Brosnahan, I love Midge Maisel’s limitlessly inventive comedic mind and her fearless stage persona. The other actors are mostly excellent.

So given TMMM’s many creative accomplishments – 16 Emmys, three Golden Globes, among many other awards – and the clearheaded vision of creators Amy Sherman-Palladino and Daniel Palladino, why are the broad comic portrayals of Moishe and Shirley Maisel, the titular character’s in-laws, so troubling?

I have no issue with Jewish people, or anyone else, poking fun at themselves. Jews pretty much invented self-deprecating humor and something deep in our DNA understands the power of satire. (Springtime for Hitler, anyone?) Jews generally love seeing parodies of themselves. And yet it’s hard to view the Maisels as anything other than the vestigial Jewish equivalent of Stepin Fetchit.

As played by Kevin Pollak and Caroline Aaron, Moishe and Shirley Maisel epitomize the cultural stereotype of The American Jew that has dogged our people since we first got here: obnoxious, loud, crass, obsessed with money to the exclusion of all else, lacking in manners and social grace, unclean, and possessed of a world view that sees the Goyim as the enemy to be defeated by our superior cunning.

In other words, we are not to be trusted. Unless, as in the case of Midge’s parents, you make yourself presentable, acceptable to the Gentile world. 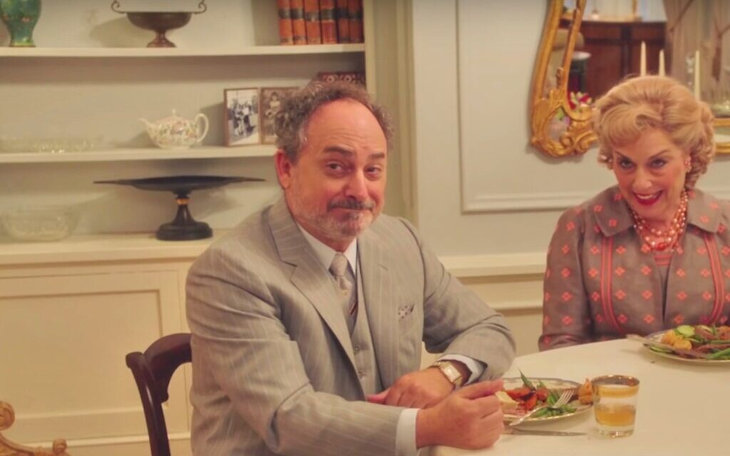 Kevin Pollak and Caroline Aaron as Moishe and Shirley Maisel

The Weismanns (Tony Shalhoub and Marin Hinckle), despite Abe’s hyper-neurotic fastidiousness and Rose’s haughty sense of entitlement – both exaggerated for comedic mileage – are cultured, refined, and educated. Abe, who teaches at Columbia, and Rose, the product of a wealthy but unusual Jewish background (no spoilers), identify culturally and religiously as Jews, but without the Maisels’ gleeful, aggressive lack of refinement. The juxtaposition of the two families is, obviously, a rolling comic set-up, but it’s old hat, and the Maisels do little more than reinforce the tiresome clichés of Jewish middle-class boorishness. Even their flashes of generosity and sense of family loyalty are not enough to overcome this all-too-familiar Jew Vaudeville, the Semitic equivalent of blackface.

In a Season One flashback, Moishe gives young Joel Maisel a father-son lecture on how the boy should leverage his upcoming Bar Mitzvah for maximum financial gain. It’s low-bar comedy writing, and the scene sends a not-so-subtle message about who the Jews really are: when we’re alone, when nobody is watching, the debased values we transmit to our children are, essentially, greed and duplicity. And that's only one of many other similarly stereotyped scenes.

In Season Three, Abe and Rose lose their financial means and are forced to move in with the Maisels until they can get back on their feet. The Weismanns treat the move from Manhattan’s Upper West Side to the outer borough of Queens as if they’ve been banished to some Siberian wasteland. The ensuing comedic clash between the two couples is predictable, but the most telling and memorable scene in that story arc is far more cringe-inducing than funny.

Looking for her grandson, Shirley Maisel wanders out into the middle of her quiet suburban street, braying various iterations of, “Ethan! Where are you?!” over and over, at the top of her lungs. Unable to stand it any longer, Rose storms outside and confronts Shirley, letting fly a furious litany of excoriations that takes Shirley to task over her embarrassing, grotesque behavior. Rose’s rant culminates in, “And you’re JEWISH!”

The Maisels are the Jews that make the other Jews hide our heads in shame. You’re humiliating all of us, with your loudness, your coarseness, your out-of-control “Jewishness” so for G-d’s sake, knock it off!

It might be argued that the scene in the street is meant as a kind of meta nod to the audience, a sub rosa acknowledgment of the show’s use of Jewish stereotypes, and thus its purpose is to beg our indulgence. Sorry, no dice. And within the context of the show itself, Moishe and Shirley stand out as all the more egregious because the TMMM meticulously avoids cultural clichés with most of the other characters, particularly the African-Americans.

The primary storyline in Season Three finds Midge and her relentlessly scrappy manager Susie (Emmy winner Alex Borstein) on tour with the fictional Shy Baldwin (played with low-key charisma by Leroy McClain), a popular African-American singer who, depending on a particular night’s audience, is a chameleonic cross between James Brown and Johnny Mathis. Shy and his mostly black entourage, including Billy, his fiercely loyal and protective manager/best friend, are utterly devoid of anything remotely resembling black racist stereotypes in speech, mannerism, or character motivations. Shy’s orchestra is mixed, but race is rarely mentioned because it doesn’t matter. They’re just people trying to survive the vicissitudes of the road and have a good time together, and although there are occasional joking references to Midge’s undeniable, shimmering whiteness, race just isn’t an issue, and thus the African American characters are treated without a trace of condescension.

And the same is true of Midge herself. What makes Midge Maisel such a great, groundbreaking character is that she manages to both embrace and subvert the stereotype of the Jewish Woman. She’s assertive, but not shrill; she would rather charm (and boy, is she good at it!) than bully. She’s a bit controlling, but by no means debilitatingly neurotic. She can be pushy, but Midge is unfailingly polite and respectful of others. Midge also strives for real truth and artistry in her work at a time when most of her peers were doing third-rate Borscht Belt schtick. She’s also not perfect (but close), which of course is necessary for a relatable, compelling character, even in a sitcom.

Even when it veers into farce, Midge is the show’s consistent core of grounded, truthful behavior. But the opposite is true of the Maisels. Indeed, one is given to wonder how capable veteran performers Kevin Pollak and Caroline Aaron came to deliver such crude, one-dimensional caricatures, the Jewish equivalent of shuck-n-jive.

Around 1917, 12-year-old Joseph Kaganuvich, my paternal grandfather, was put on a boat to New York to escape the Russian pogroms against the Jews. Like the Maisels, Joe spent his entire working life in the garment industry. He had only a high school education, but he was tough, stubborn, smart, and resourceful. My grandparents flourished during the Great Depression and Joe was running a factory in Pennsylvania while still in his 20s. He was also an incredibly cultured man: he loved opera and the theatre, and could, I’m told, speak with intelligence and authority on a seemingly endless array of subjects. My early childhood recollection of him –  he died when I was seven years old – is that of a wise, gentle, loving grandfather who lit up the moment my baby sister and I walked into the room.

Might not it serve TMMM to find similar nuances in the Maisels? My grandfather was living proof that those people, those Jews, actually existed.

Yes, it’s just a sitcom, and there are other broad characters on TMMM, but there’s still no excuse, stylistic or otherwise, for the loutish, uncouth Maisels and what they represent.

I humbly suggest that the Palladinos find ways to counter balance the show’s shopworn, banal portrayals of working-class/upper middle class Jews – they certainly possess the writing chops to do so. As with Stepin Fetchit and the Blonde Bimbo, perhaps it’s now time to retire the stereotype of the Ugly Jew. Given the recent global uptick in anti-Semitism, and all its attendant tsuris, this might be a great moment to do so.

But don’t worry. Jews will still be funny.

Lee Michael Cohn is a screenwriter, film producer, director, and longtime teacher of acting at many prestigious institutions. He is a veteran of the Warner Bros. Comedy Writers’ Workshop, and the co-author of A Practical Handbook for the Actor, the best-selling acting book ever written. Lee has optioned many film and TV scripts, and was a two-time grant recipient as playwright-in-residence at California State University, Northridge in the Veterans in Theatre Project. He has also produced numerous multi-million dollar fundraisers for The Foundation for Ethnic Understanding, an organization that promotes solidarity between the Jewish and African-American, Latin-X, and Muslim communities. He holds a BFA in Drama from NYU/Tisch School of the Arts and an MFA in Creative Writing from the University of California, Riverside. He has taught acting workshops in New York, Miami, Vancouver, London, and many other places. Lee resides in Los Angeles, but please don’t hold that against him.