It’s 8 p.m. at Madison Square Garden and the biggest event of the year – Justin Bieber in concert – is about to begin. The show has been sold out for months, and thousands of (mostly) screaming girls wait for their heart-throb to take the stage. But first, Justin and his team bow their heads for a moment of prayer:

Never mind that Justin is Christian. Under the stewardship of 29-year-old Jewish manager Scooter Braun, the guiding principles of Justin Bieber’s career are firmly rooted in Jewish tradition.

In case you've been hiding in a cave, Justin Bieber is the most searched-for celebrity on the Internet. He accounts for 3% of all traffic on Twitter. His video for the song “Baby,” with 450 million views, is the most popular YouTube link ever.

It all started in 2007, when Scooter Braun, a music executive living in Atlanta, was scouring the Internet for the “next big thing.” By accident, he came across YouTube videos of a 12-year-old Canadian kid, singing off the cuff at home. Braun was awestruck: “This kid had soul, an incredible voice, could play multiple instruments, and could dance. He had it all.” Scooter went into overdrive to track the kid down.

The search led to Stratford, Ontario, a nondescript town where Justin was being raised by his single mom, just 18 years his senior. At first, Mom was highly suspicious of the aggressive guy on the phone, and she pushed him off. But Braun persisted, and subsequent conversations revealed that the two sides shared a deep commitment to family values.

Justin and his mom flew down to Atlanta. Scooter signed them to a recording and management deal. And now, one meteoric rise later, Justin is simply the most popular teenager on the planet and the star of a new major motion picture, Never Say Never.

All this has put Justin in the precarious position where he could end up like so many other teen mega-stars, whose personal life and career crashed in a tragic muddle of drugs, excess and narcissism.

That’s where Scooter Braun steps in: “I’m not going to let that happen to him,” he says. “Talent never betrays the artist. It’s personal choices that betray the artist.”

Scooter has also assumed the role of Justin’s surrogate father.

Scooter – aside from managing all of Justin’s business matters and directing his artistic career – has also assumed the role of surrogate father and the prime male influence in Justin’s life. “The only way he is going to transition into an emotionally healthy adult and continue to have a successful career is if he understands his responsibilities,” Scooter told Aish.com. “He needs the right tools to handle the pressure.”

Scooter’s first order of business has been to build a team characterized by genuine heart and integrity. “We have an ironclad rule for anyone working with Justin: If you treat him like a superstar, you’re fired immediately. We don’t coddle him. We hold him up to being responsible. We demand that he shows respect to people. If he makes a mistake, he has to apologize. Our job is to not only guide his career, but to make sure he grows up to be a good man.”

Related Article: Do You Know Where You're Going To? 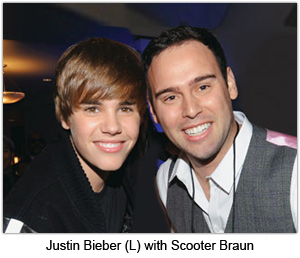 Scooter Braun knows a bit about the dangers of becoming spoiled. He led a charmed life, growing up in the Connecticut suburb of Darien, one of the most affluent towns in the United States. Braun's family lived in a house with tennis courts, a swimming pool and an indoor basketball court. Scooter was a star guard on the Greenwich High basketball team, and was elected class president three years in a row.

Amidst all the wealth and success, it was Jewish values that served as a counterbalance.

The idea of taking responsibility was constantly stressed. His father would frequently cite the Talmudic teaching: “In a place where there is no man, you must stand up and be a man.”

“My parents raised me to follow a higher moral standard,” says Scooter, AKA Shmuel ben Eliezer. “They taught me that every human being is extraordinary. It’s up to us to set lofty goals – and then strive to exceed them.”

With a kosher home, trips to Israel, and other Jewish activities, the Braun family was devoted to bedrock Jewish ideals. “Education, family, charity, God. These are the core values that I was taught to live by, and this forms the foundation of my relationship with Justin.”

Exactly how do these values manifest in Justin’s career?

“Every business arrangement must have a charitable component built in, or else we don’t do the deal,” Scooter says. For example, one dollar from every concert ticket sold goes to Pencils of Promise, an organization – aptly founded by Scooter’s brother Adam – that builds schools in the Third World. "It's all about giving back and helping out kids that need education,” Justin told MTV. “It's really important that I'm able to help out other kids. As a kid myself, it means a lot to me."

Another example: Scooter launched a contest to support the Women & Children's Hospital of Buffalo, New York. The school that collected the most pennies would win a free Justin Bieber concert. The contest raised $152,000 –15.2 million pennies, weighing in at 41 tons of copper.

What’s the point of all this if you can’t make a difference in others’ lives?

Justin has taken on support of children’s hospitals as his personal cause. In every city, he stops at the children’s hospital, going from room to room to meet with kids and cheer them up. Justin’s new film is being screened at children’s hospitals across America, and some proceeds from his new acoustic LP are being donated. Justin explained in a Twitter post: "I am in the position to give back thanks to my fans and God… I wanted to help others and I feel like I have a responsibility to do so. What’s the point of all this if you can’t make a difference in others’ lives?"

All of this makes Scooter Braun proud. "When I was growing up, my father taught me that the true role models aren’t athletes and entertainers. Rather it is those who do their job to the best of their ability. We have to serve as an example to others. That’s the responsibility of any human being, all the more so the responsibility of a celebrity. And that’s the lesson I’m teaching Justin.”

Scooter’s parents walked the walk, instilling in him the power of giving. “There were always different people staying in our house – a family of Russian-Jewish immigrants, or other people in need,” Scooter says. “At one point two brothers from Mozambique needed a place to stay for a few weeks, so we took them in. Before long, my parents became their legal guardians. We became very close and I was recently ‘best man’ at one of their weddings. Looking back, I see we did a lot to help them, but I believe they did much more for us.”

Scooter’s Jewish pride extends to support of Israel as well. While many performing artists have backed out of concerts in Israel due to pressure from pro-Palestinian groups, “Bieber Fever” will hit Tel Aviv in April 2011 for an outdoor concert that expects to attract 60,000. The entire Braun family will be joining the entourage, reuniting with Scooter’s sister who attends medical school in Tel Aviv. The family plans to stay on afterwards to celebrate Passover in the Holy Land.

Scooter’s grandmother – who spent her teen years in Auschwitz – will be part of the trip as well. Scooter’s (now-deceased) grandfather survived Dachau and Mauthausen. The two met after the war and got married, settling in Hungary. Then in 1956 when the revolution struck, the couple orchestrated a spectacular nighttime escape, traveling on a horse-drawn wagon through the countryside, and crossing the border into Austria just ahead of the Soviet tanks.

Growing up, I was angry that I didn’t have a larger family.

“That’s one reason I am so insistent about doing a concert in Israel,” Scooter explains. “Growing up, I was angry that I didn’t have a larger family – aunts, uncles, cousins. My grandmother was the sole survivor of her family. The Holocaust made me appreciate the price that the Jewish people have paid, and for me the State of Israel represents the idea that Jews never need to fear about who we are.”

It’s these and other Jewish lessons that Scooter is now applying full-force to his client and protégé, Justin Bieber.

So what’s the deal with the Shema?

“Justin has 20,000 people a night telling him that he’s the greatest thing on Earth,” Scooter explains. “That’s why it’s so crucial to acknowledge the One above us. Without that awareness, there’s no chance of staying grounded.”

To that end, Justin’s mom began forming “prayer circles” before each show. Scooter felt uncomfortable with the Christian themes, so he teamed with another Jew – Dan Kanter, the show’s musical director – to say their own prayer, the first line of Shema.

“After the third show, as we said the Shema, Justin chimed in,” Scooter explains. “I was shocked. But he told me that he’d been listening to us and had memorized it. So now every night he says it along with us. He likes the ideas it represents.”

Star Trek and God
Scientific Curiosity and the Divine Encounter
Mind Over Milkshakes
Love the Convert
Comments
MOST POPULAR IN Jewlarious
Our privacy policy
Aish.com Is Looking for Great Writers