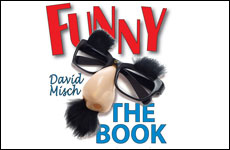 David Misch likes to make people laugh – and to understand why they laugh. There’s something very Jewish about that.

David Misch grew up in Chicago in a primarily Jewish suburb. In college he started “playing around with the guitar” so friends encouraged him to perform at the local coffee house. “My friends laughed uproariously,” David recalls, “or at least that’s the way I remember it. So thence commenced five years of being a performer.”

David’s career in comedy began as a humorous folk singer releasing a song called “Somerville” to national acclaim, and soon after he became a stand-up comedian.

“My friends laughed uproariously -- or at least that’s the way I remember it.”

While David was succeeding as a stand-up comedian, something was missing. “I wasn’t the stand-up comedian type. My favorite reaction wasn’t all out laughter, but people nodding their heads saying ‘Hey, that’s really good.’” So his manager decided to send some of David’s writing samples to a few television shows and that landed him a writing gig on the show Mork & Mindy. “When I first heard about it – that it was about an alien living in Colorado – I thought it sounded stupid. But my manager told me not to worry – that it was starring this really funny young comedian named Robin Williams who would be a standout star.” Mental note -- always listen to your manager.

From there David developed to a successful career, writing for NBC, CBS, ABC, Fox, UPN, HBO, Showtime, PBS, ABC Family, Disney, Universal and Lifetime. He sold a number of screenplays and worked with Jim Henson and Frank Oz as a special consultant on the film, The Muppets Take Manhattan.

Despite his success in writing comedy, he always felt a need to dig deeper. He didn’t just want to do comedy, he wanted to study comedy. Or more accurately, teach it. “There were a lot of screenwriting courses out there and even some that touched on comedy,” says David, “but none that studied comedy itself, taking a macro view of comedy as a discipline.” The result was his course given at the University of Southern California’s School for Cinematic Arts, titled, Practical Foundations of Comedy.

The course ultimately resulted in David publishing a book titled Funny: The Book. In it he discusses topics ranging from the history of comedy, to the common comic archetypes, and even what makes something funny. It’s a comprehensive survey of comedy. In Jewish terms, he gets into the kishkes of comedy. David admits that there’s something very Jewish about what he’s done. “When I like something I want to take it apart and understand it. And as a people, I think that’s how we Jews operate. Over our history, we’ve studied, picked things apart and debated them, and that’s what I’ve done with this book.”

In his book David also explores the oft-asked question: Why are Jews so funny?

“…by the ’70s, it was estimated that Jews made up about 3 percent of the US population . . . and 80 percent of professional comedians. Their humor emerged from Jewish traditions. The Jewish holy book, the Talmud, uses intricate, elaborate arguments… and absurd situations (think of the role of nonsense and whimsy in comedy) to tease out the mean­ing of religious dictates.

Jewish satire may have sprung from the egalitarian nature of Eastern European communities, where the powerful were mocked subtly rather than attacked overtly. There were even Jewish jest­ers: badchonim were hired for weddings to poke fun at prominent members of the community—they mocked rabbis, rulers, and rich people. “

David adds that perhaps the biggest influence on Jewish humor is Jewish history. He quotes Nobel Prize winning Saul Bellow who said, “Oppressed people tend to be witty,” and comedian Mel Brooks who remarked, “My comedy comes from the feeling that as a Jew, even though you’re better and smarter, you’ll never belong.”

Perhaps not surprisingly, David has found an audience for his book in the Jewish community. The Jewish Book Council is an organization with a simple mandate – to promote Jewish books. They hold a yearly gathering where authors of Jewish books present to approximately 300 representatives of Jewish book clubs, Jewish schools, synagogues etc. David believes that his book was well received at the convention, “I think I did well because the lineup for my night was either cookbooks or holocaust memoirs. So I think people were ready for some comic relief.”

David will be visiting a number of Jewish communities across America over the year, under the auspices of the Jewish Book Council. “I was just in Montogmery Alabama visiting the Jewish community there. They were so hospitable. I hope the rest of the cities will be like that!”

David admits that without his Jewish background, he wouldn’t have been able to take on this project. “Being Jewish gives me a certain sensibility. It encourages me to take things apart, analyze them, and understand what makes them work. This has allowed me to take comedy seriously and appreciate it for the art form that it truly is.”

Funny: The Book can be purchased on Amazon.com here.

Avatar and the Jews