The Archenemy of Happiness 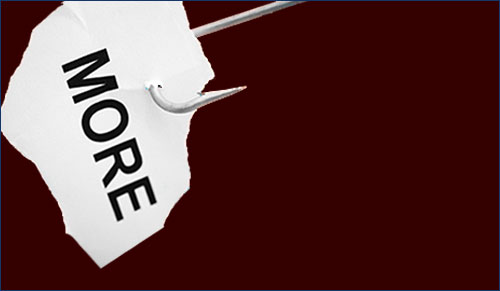 I used to think that the main goal of American business was to make people happy. Create new products so consumers have a better quality of life. Add new bells and whistles to existing technologies to offer a more satisfying experience to the users.

I thought happiness was the objective. But the truth is just the opposite: billions of dollars are spent to figure out how to make us feel unhappy. And unless we understand the secret motivation behind the desire of marketers to make us feel discontented with what we have, we are going to fall victim to a never ending cycle of unhappiness.

I realized it recently when I heard a friend bemoaning his fate. Not too long ago, but almost a previous era in terms of technological innovation, he bought the new iPod. He was ecstatic. But it didn't last. What a shock to discover that there is now newer and better model on the market. His formerly beloved iPod is now an ancient relic. How could he possibly be happy with it?

Since new is always better, there is a very short window of time for anyone to feel satisfied with what they have. To make sure that the contentment of consumers is very quickly terminated, there is a multibillion dollar industry whose purpose is solely the systematic propagation of unhappiness: advertising. Its goal, as admitted by advertising guru B. Earl Puckett, is summed up in this succinct credo: "It is our job to make men and women unhappy with what they have."

The "game" of creating unhappiness is a multifaceted industry. We can perhaps see it best in the world of fashion.

Big business brainwashes consumers to believe that they need more.

Oscar Wilde once said, "Fashion is a form of ugliness so intolerable that we have to alter it every six months." Why do fashions change so quickly? One week you're an outcast if you're not wearing a certain kind of sneakers. The next week, you're a geek if you haven't switched to another brand. Why must you constantly have something else?

Because big business needs consumers, so consumers have to be brainwashed to believe that they need more – something newer, something better, something that will finally make us happy when we get it.

Of course once we buy it the cycle starts all over again.

Why do we go along with this? Why do we buy into a belief that is virtually guaranteed to make us unhappy since there will always be something newer that we don't yet have?

Because we've bought into the notion that happiness comes from having more, instead of the brilliant insight of the Talmudic sages that "Who is rich? One who is content with his portion."

More is never the answer. More has no limits. More seduces us with the unspoken promise of contentment when its very premise is that you dare not be happy with what you already have. If more is the goal, when can you possibly say you've achieved it? No matter where you're at in life more will still beckon you, using its stock in trade argument that you can't possibly be happy as long as there are still things that you don't possess.

Related Article: The Secret of Happiness

In the old film Key Largo, Edward G. Robinson, in the role that defined him, plays a gangster whose life is filled with violence and deceit. In the film he holds a family hostage. Someone asks him what makes him want to live this kind of life but try as he might Robinson can't answer this question. So one of the hostages, played by Humphrey Bogart, suggests an answer: "I know what you want. You want more." Robinson's face brightens as he says, "Yeah! That's it! That's what I want. I want more."

Fast forward more than half a century and hear how the same theme is repeated in Oliver Stone’s "Wall Street: Money Never Sleeps," capturing what motivates those who are ready to destroy their friends and their families in pursuit of unlimited wealth. In a meeting between the young Jake (Shia LaBeouf) and the megalomaniac, Bretton James (Josh Brolin), Jake puts the question to Bretton, who has already caused the suicide of a competitor and the destruction of another firm with false rumors, "So what is your number?”

When Bretton doesn't understand, Jake explains that everyone has a really far out number that represents total success, the ability to get out of the race knowing that he is now the victor. “So what's your number,” Jake repeats. Bretton considers and after a few moments of silence responds with one word: "More.”

The desire for more is our contemporary idol – and we worship it at our own peril.

Sadly, we transfer the idea that only something newer and different will bring us joy into our personal lives as well.

We can replace our insatiable demand for more with the awareness that we have more than enough.

Countless studies have shown that the secret of happy marriages is the ability to feel contentment with their partners in spite of the lack of perfection. True love does not come by finding the perfect person, but by learning to see an imperfect person perfectly. My father would tell people that he had the most beautiful wife, the best cook in the world, the greatest mother to his children. Did he really believe that my mother was truly the most outstanding woman in the world? Yes, he did, because he chose to ignore her faults and overemphasize her qualities. He wasn't interested in more. He knew that the woman he married was a gift from God.

The divorce rate today is testament to the results of worshipping more. “Why should I be satisfied with this person if there might be someone newer or better out there? I could have more than I have now.”

Believing that more automatically leads to joy condemns us to an endless pursuit as we ignore those parts of life that really give it meaning and joy.

But we can stop being the creators of our unhappiness by replacing our insatiable demand for more with the awareness that we have more than enough.

Kurt Vonnegut and novelist Joseph Heller were once talking at a party hosted by a billionaire hedge fund manager. Vonnegut pointed out that their wealthy host had made more money in one day than Heller ever made from his celebrated novel Catch-22.

Heller responded, "Yes, but I have something he will never have: enough.”

Clip from Key Largo
Clip from Wall Street II
Like What You Read?  Give Jews around the world the chance to experience engaging Jewish wisdom with more articles and videos on Aish. It would make your mother so proud and as a nonprofit organization it's your support that keeps us going. Thanks a ton!

Wild: An Adventure in Self-Discovery

Say Something & the Myth of Overnight Success
In the Shadow of David and Goliath
Where Do the Laws of Nature Come From?
Saadiah Gaon, Rashi and Maimonides: How Three Rabbis Revolutionized Judaism
Comments