The Light of the Life Force 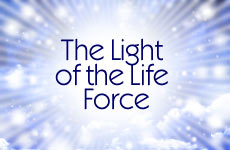 The stories of the Bible contain ancient, timeless secrets for living an empowered life. From the very first words, we are inspired to connect with the light.

In the beginning, when God began to create heaven and earth, the earth was unformed and void, with darkness over the surface of the deep and a wind from God sweeping over the water. (Genesis 1:1-2)

This image is one of desolation and despair. It makes you shiver. It feels cold, dark, and lonely. It brings to mind those moments of despair when you have felt lost, could not see any order in the chaos of life, and felt as if you couldn't go on. Perhaps in those darkest of moments, the most appealing answer was death. And that is clearly the image that is meant to be conveyed here.

But the story continues:

Light -- the answer to darkness. Yet could God really be creating light the way we understand it -- as a source of illumination? That doesn't make much sense, since it's not until 13 sentences later, on the fourth day, that we are told that God created the sun, the moon, and the stars. But here we are on the first day -- and obviously, there is no electricity -- so where is this light coming from? It's a light that is coming not from the sun or the moon or the stars. It is not simple illumination. It is something more.

When we look at the original Hebrew text, the answer becomes even more clear, because the Hebrew word used to denote light in this passage is Ohr. And when we consider how the word Ohr is used in other places in the Bible, we begin to understand that it doesn't mean an ordinary light, but a supernatural light. I would call it a "life force," specifically a divine life force.

Ohr doesn't mean an ordinary light, but a supernatural light.

So the first thing God created was life.

This life didn't take on the character of any being at first -- not an insect, not an animal, not a human. It was metaphysical, divine life energy that permeated the whole world. So there was only one thing that existed before the world was created, and that was darkness which is a form of death. The first act of creation brought into being its opposite -- life. The life force.

THE WAY OF THE WORLD

This ancient passage is telling us from its very opening lines that this is the way of the world. There will always be darkness and chaos and confusion. We will feel the void of death all around us and lapse into despair. But the Bible is also saying that if we want to help one another we must -- like God -- bring the light of our life force to that darkness.

How does one begin?

There are two approaches: one is symbolic -- because symbols can be very powerful and have a creative and healing energy of their own; the other is through specific, concrete action.

One rabbinical student took upon himself as a special project to offer Shabbat candles to all the patients in the hospital where I am chaplain. He understood that candlelight represents the life force, and to light a candle in the room of a sick person is a life-affirming act. These patients are mostly in contact with the death force, the destructiveness of illness.

While lighting candles is a symbolic act, it can have concrete positive consequences.

While lighting candles is a symbolic act, it can have concrete positive consequences. For example, several nurses have reported to me that quite often, after a candle has been lit, the sickest of patients appear to be calmer and enjoy a few hours of respite from pain.

I am also reminded of a particular patient, an elderly Romanian Jew, whom I encountered early in my chaplaincy career. He was gravely ill and had decided to be listed as "no code," meaning he did not desire high-tech interventions that might extend his life. But despite that decision, as death neared, he asked to be placed on a ventilator that would assist him with his breathing.

The hospital personnel, feeling his request was a panic reaction to approaching death, were reluctant to prolong this harrowing process, and they asked me to talk him out of it. But while speaking with him, I felt something more was going on, and as a result of my intervention, the patient was placed on a ventilator. To everyone's amazement, he felt much better after a few days and asked to be taken down to the chapel.

As it happened, this was the first day of Chanukah, and he participated in the special candle-lighting ceremony that is such an important part of the Festival of Lights. Only then did I realize the meaning of everything that had happened.

This man, as he neared death, needed to connect with the light, and he knew somewhere in the depths of his being that he would have to hold out until Chanukah to do so. He died in peace.

THE MYSTERIOUS POWER TO HEAL

In a hospital everything is scientific. And it's good that it is. Science helps a lot of people, but everyone who works in the hospital knows that sometimes there is a magic in the healing process that science can't explain. Supernatural things occur that defy scientific understanding. Patients awaken from comas despite their physicians' most dire prognoses. Cancers mysteriously disappear, and those told they have a year left to live somehow manage to survive ten.

If you recognize the presence of the supernatural and don't just dismiss it as "one of those unexplainable things," you can begin to see this Ohr, this life force, is not something outside you, but something within you. And if you connect with it, you can transform yourself and others.

There are many ways -- small, everyday ways -- in which we can bring the light of the life force into our world. For a start, we might begin by allowing ourselves to be more open. We can admit our vulnerabilities to those we love and be less guarded and more honest in our intimate conversations.

We can be more supportive and encouraging of our friends and co-workers. When you do so, you bring life affirmation to those people. On the other hand, if you are constantly criticizing, you are acting contrary to life affirmation.

If you are constantly criticizing, you are acting contrary to life affirmation.

If this sounds cryptic, consider what it means when someone comes to you with a new idea and you respond, "Yes, but ..." Are you a person who always says, "Yes, but ..."? If so, you may be acting in a way that is opposite to life affirmation by always finding reasons to put a damper on creative ideas.

This is a deep idea and another level at which the opening lines of the Bible are to be understood. You may have asked yourself, "Why is God creating Ohr? That's a valid question. What is the purpose?

This is the first thing He creates, so apparently it is something that He wants to be part of the creative process, part of the scheme of things. I mean, why not just start with the sun and the moon and the stars?

God gives us the creative force first, because He intends for humanity to be co-creators with Him and continue the process of bringing light to the universe.

It's a powerful idea. Having been given this life force, we can nurture it or corrupt it -- this is the key to living in life or living in darkness.

So ask yourself: Are you working to give back what you have been given? Are you giving it to others around you? If you are, you are also giving it back to God.

Rabbi Levi Meier is the chaplain of Cedars-Sinai Medical Center in Los Angeles and a clinical psychologist in private practice. The above has been excerpted from his book "ANCIENT SECRETS: Using the Stories of the Bible to Improve Our Everyday Lives." To purchase Rabbi Meier's book click here

Why the 4 Species on Sukkot?

Confessions of a Creationist

Judaism and the Multiverse
What Makes Eli Run?
The Tyranny of Materialism
Science Enters the Mysterious Inner World of Consciousness
Comments
MOST POPULAR IN Spirituality
Our privacy policy