The Last Jedi and the Force of Family 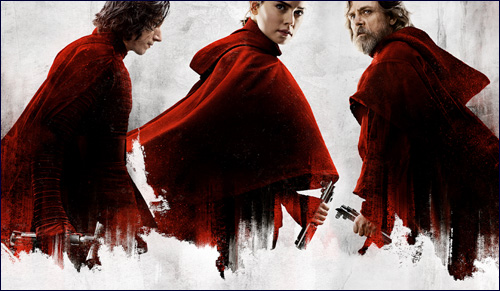 The new Star Wars movie is all about family.

Having grown up with The Force permeating the very air I breathed, the release of the new Star Wars movie is momentous. I can barely contain my excitement, especially since The Force Awakens was so fantastic – stunningly fresh yet blissfully nostalgic, introducing us to courageous new heroes, dastardly villains, and reuniting us with beloved characters from the original movies.

The Force is strong in my family.

After watching The Force Awakens, I was struck by a theme that is especially dominant in these movies, one that I had never considered properly before. An iconic Star Wars line, which formed the cryptic voice over to the teaser trailer for Episode 7 is, ‘The Force is strong in my family,’ and really this whole epic is about family to its core.

One of the greatest moments in cinema history is when Luke discovers his true parentage. It was this revelation that took the original movies to a new level of intensity in terms of the struggles of the hero, forcing him to wrestle with the Light and Dark in himself – in his blood – passed down from his fallen father. Ultimately, Luke resists the temptations of the evil Emperor, and manages to save Vader/Anakin.

Episode 7 continued to explore these dynamics, but now the good side is represented by the parent generation, Han, Leia, and Luke, the uncle, while the child, Kylo Ren, has chosen the Dark Side. Ren was immediately established in The Force Awakens as an exceedingly wicked and heartless villain, murdering innocents within the first few minutes, but his most heinous crime was (SPOILER ALERT!) his cold-blooded murder of his own loving father Han, a complete reversal of Luke’s actions. The trailer for Episode 8 seems to suggest that he will be completing his task of ‘killing the past’ by murdering his mother too – but at this stage that is just conjecture.

One of the other unanswered questions in the new story is the identity of Rey’s parents. We were first introduced to her as a scavenger waiting on the dead-end desert planet of Jakku for her family to return, but we were not told who they were. We are even teased during her light-sabre inspired vision with the image of the child Rey being left behind, calling ‘Come back!’ There are many theories about who she really is, and maybe someone out there is right, but the main point is, everyone knows it’s really important! Her parents must have been significant, because in these movies, your parentage defines and determines your abilities. We have already seen that the force is strong with Rey, and in the new trailer we hear Luke likening her ‘raw power’ to Ren’s, so we know there is a mystery that needs to be resolved.

These ideas are pretty obvious, but if you consider other major sci-fi/fantasy franchises of our time, you will notice that Star Wars is unusual in its emphasis of family. In the Marvel movies, Hunger Games, Twilight, Lord of the Rings and Star Trek, the heroes’ parents barely make an appearance. Friendships or romance tend to dominate. In Harry Potter parents and lineage are significant, but they don’t define characters in the same way, and the central relationships are again friendships. Even taking a quick look at the spin off Star Wars film, Rogue One, we can see that in this fictional universe, family never loses its importance – the key relationship in Rogue One is between Jyn Erso and her father, Galen.

The centrality of the parent-child connection cannot be lost on the Jewish viewer. Judaism is passed down from mother to child, and it is the parents’ responsibility to educate the child in the ways of the Torah, hoping and praying that the child will choose to follow and embrace it of their own accord. The relationship between a parent and child is so vital and powerful that it forms the 5th of the Ten Commandments, and is grouped amongst the laws between Man and G-d, and not between Man and Man. The reason is that through your relationship with your parents you understand your relationship with G-d, and they are your connection to Him.

This is not to neglect another major theme in Star Wars that resonates with the Jewish viewer – that of the teacher and pupil. Ability with the force is passed down through blood, but Jedi tradition is taught by a mentor. From the trailer, it looks like this will be very important in Episode 8 as Rey trains with Luke, similar to the way he trained with Yoda in Episode 5. It also looks like she may be tempted to abandon Luke in favor of Kylo Ren as a teacher. Again, the relationship between teacher and pupil is central in Star Wars, as it is in Judaism. Pirkei Avot (Ethics of the Fathers) exhorts the individual to ‘Make for yourself a teacher’ because everyone needs someone who they can learn from, in addition to parents, just like a Jedi needs to learn from a Master.

For me, this theme of family and the transmission of a tradition are the most Jewishly significant themes in Star Wars. This really resonated with me while watching The Force Awakens now as a mother, hoping my children will choose the ‘light’ of Torah. The anguish of Han and Leia about the loss of their son struck a chord with me in a way it never could have with the child I was when Star Wars made its debut. Perhaps this was a conscious decision on the part of the filmmakers who know their original audience has become parents. But it’s not all doom and gloom, as Leia says about her son, ‘There is light in him’, and though Ren is a very extreme example of a child rejecting his parents and mentors, the light is always there, and ultimately, there’s always an opportunity for redemption.

That’s a message that resonates with us here, and also with those in a galaxy far far away…