Connection with Eternity: Ethics of the Fathers, 3:15 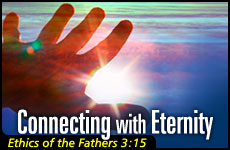 It is we who hold the keys to the kingdom.

Rabbi Elazar of Modin said: "One who desecrates sacred objects, one who dishonors the festivals, one who shames his fellow in public, one who abrogates the covenant of our forefather Abraham, or one who interprets the Torah contrary to Jewish law -- even though he may have to his credit Torah study and good deeds, he has no share in the World to Come." -- Ethics of the Fathers, 3:15

The human being is in all Creation. Animals are purely physical, with no longings or aspirations beyond the fundamentals of survival -- safety, food, shelter, sleep, and reproduction. Angels, Malachim, the heavenly messengers dispatched by the Almighty to perform His will, are purely spiritual, lacking the slightest attraction to the physical that might distract them from their missions.

Only human beings possess a spiritual essence encased within a physical shell. Only human beings have the opportunity to achieve spiritual greatness by transcending the downward pull of their physical nature and striving to cling to the Divine. And, of all the nations of the world, the Jewish people have been charged by the Almighty with the special task of inspiring all mankind to sanctify itself by pursing its spiritual destiny.

The concept of sanctification, however, does not translate well into Western culture. What is sanctity? What is holiness? What is divinity? These are words we use with little feeling for what they truly mean.

However, God's separateness does not distance Him from us. Rather, it defines the purpose of our existence.

THE ART OF SEPARATION

In the time when the Temple stood in Jerusalem, objects dedicated for priestly service acquired the status of kodshim -- sacred articles. Similarly, even nowadays the holiday seasons are set apart from the mundane activities of the rest of the year as times of sanctity. Not only the holidays themselves, but also the intermediate days of Passover and Sukkot are defined as seasons of kedusha, holiness. The individual who neglects or disregards the separateness of these sacred objects and spiritual seasons is, in effect, denying the divine nature of his own inner self. By thus rejecting his own spiritual essence, he cuts himself off from his spiritual reward in the World to Come.

But proper public conduct is not enough unless it is a projection of internal conviction. By failing to observe the covenant of bris milah, or circumcision, one not only severs his connection with his forefather Abraham, he rejects the very concept that human beings are capable of mastery over their impulses and defines himself as little better than an animal. Either way, he has rejected his own Godly nature and therefore disavowed the separateness that is the foundation of his eternal reward.

Finally, our mishna addresses one who, consciously or carelessly, distorts the true interpretation of the Torah. Just as the laws of physics that govern our physical world are constant and unalterable, similarly are the laws that govern the spiritual universe immutable. As the handbook for moral conduct and spiritual well being, the Torah cannot be twisted to conform to individual or cultural predispositions. The law is the law. By attempting to force the Torah into line with personal sensitivities, by denying that there are absolute rules of divinity, man cuts himself off from the source of everlasting life.

True, there is no more noble pursuit than to study God's will in order to apply what we learn through good deeds. However, when our conduct reveals self-serving motives contrary to the Godly nature within us, then it is not God who decrees that we have no portion in the World to Come. It is we ourselves who have forfeited our connection with eternity.

The complete human being is one whose external self reflects his internal spiritual essence, who has harnessed his animal nature and conscripted it into service as he seeks to raise himself higher and higher in pursuit of spiritual perfection.

My Moment of Weakness

The Jewish Artist in Iran's Royal Palace
The Blue Beyond
Great Place to Live
Is Eating Supposed To Be Spiritual?
Comments
MOST POPULAR IN Spirituality
Our privacy policy