Empires Come and Go: Ethics of the Fathers: 2:7 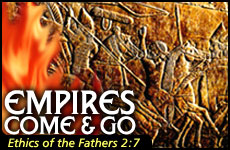 In the midst of dark times, Hillel reminds us that Divine Providence guides every detail of history and justice will ultimately prevail.

[Hillel] also saw a skull floating on the water. He said to it: "Because you drowned others you were drowned, and in the end those who drowned you will be drowned."

It is simplest to consider the ethical lessons of our sages as a reflection of their personalities and sensitivities, each of the emphasizing the moral values he embodied in his own life and his own teachings. This is certainly true, but it presents only a part of the complete picture. For our sages offered us much more than general insights into character and virtue; they applied their teachings to specific events of their times in which they found not the random unfolding of history but clear and relevant lessons in Jewish perspective.

In this mishna, Hillel alludes to two of Judaism's most fundamental principles: the first is hashgacha pratit -- Divine Providence; the second is middah keneged middah -- measure for measure. It was the genius of Hillel to articulate both these profound ideas by connecting the macrocosm of Roman supremacy with the seemingly insignificant occurrence of happening upon a skull as he walked beside the water.

In the year 63 BCE, the Roman general Pompey led his army to victory over Syria and, shortly thereafter, extended his control over the autonomous nation of Israel. Returning to Rome three years later, Pompey allied himself with Crassus, another general and one of the richest men in Rome, and with an influential politician who would soon become known as Julius Caesar. Together these men seized control of the government and declared themselves the First Triumvirate of Rome.

The alliance endured for a decade until Julius Caesar, flush with his military victories over the Gauls, led his army across the Rubicon river and advanced upon the unprepared capital. Pompey fled Rome and raised his own army, only to be defeated by Julius the following year (48 BCE) in Greece at the Battle of Pharsalus. Pompey fled again, this time to Egypt, where he was murdered.

Julius consolidated his forces and became Caesar over the Roman Empire by 45 BCE. But his success was short lived, for he was assassinated only one year after seizing absolute power. It was about him that Hillel said, "Because you drowned others, you were drowned; and in the end those who drowned you will be drowned." Indeed, Caesar's assassins, Brutus and Cassius, committed suicide after the defeat of their forces at the Battle of Phillipi in 42 BCE.

Many of King David's Psalms begin with the introduction, "For the Conductor." King David suffered deeply throughout his life, first as an outcast in his own family, later as a fugitive fleeing for his life from the soldiers of King Saul, and eventually having to endure the rebellion and death of his son Absalom. But for all his anguish, David never questioned the reason for or the justice behind his trials. Instead, he raised his voice only to praise the Conductor, the One who guides all human events, the One who orchestrates all the myriad "instruments" of creation, the One who blends all the discordant noise of the world into supreme harmony.

David's recognition that Divine Providence guides every detail of nature and of history, and his understanding that the Master Conductor ensures that human free will never results in ultimate injustice, consoled him in the midst of his pain and reassured him that all accounts would, in time, be equitably settled.

Implicit in this perspective is the further recognition that all of God's actions are measure for measure, that every punishment fits the crime and that every reward fits the good deed. And so we learn that the charitable can look forward to ultimate wealth while the miserly can anticipate poverty. Whether the accounts will finally balance in this world or in the next is irrelevant; the Conductor will see that harmony prevails in the end.

Hillel endeavored to use his Torah wisdom to inspire his people and restore their hope.

The days of Hillel were dark times for the Jews. The glory of the Maccabees had faded, leaving behind a string of tragedies that broke the spirit of the Jewish people and convinced many that life offered no hope of redemption. The Sadducee King Yannai had shut down Jewish schools and executed many of the sages. Yannai's sons, Aristobolus and Hyrkanus, had fought a five-year long civil war ending with the death of tens of thousands, the siege of the Temple, and the Roman occupation of Jerusalem and Israel. The chaos of civil war had given way to the violent instability of Herod, about whom the Jews would eventually say, "Even if a raging beast had reigned over us, the calamity would not have been as enormous as the disasters inflicted upon us during the period of Herod's rule."

And times were growing even darker, as infighting among many factions of zealots and Sadducees increasingly destabilized Jewish society and aroused the wrath of Rome.

As spiritual leader of the Jewish people, Hillel sought to do more than teach; he endeavored to use his Torah wisdom to inspire his people and restore their hope. Every day and every moment, Hillel tells us, we can find messages from above to remind ourselves that justice will ultimately prevail. As uninspiring as we might find a skull floating in the water, Hillel found therein a powerful lesson for his time. If Julius Caesar murdered others, he too would be murdered and likewise those who murdered him. The most powerful emperor is only a man, and all men are mortal. So too is the Roman Empire a human construct and, as all things built by men, it is ephemeral. Rome may be strong now, but the time will come that Rome will fall, and so will the empire that supplants it fall in its turn.

However imposing the might of Rome must have seemed, Hillel predicted that it would follow in the way of Egypt, Assyria, Babylon, Persia, and Greece. Emperors and the empires come and go, each falling before the next as the last fell before it, each seeming to extend its power to the corners of the globe before collapsing under its own weight, each leaving behind little more than dust and ruin. If the sun of the Roman Empire had reached its zenith, it would soon begin to set. Rome would vanish like the empires that preceded it, but the Jews would remain, outliving Rome as they had survived those that came before.

This was the message of Hillel to his generation, echoing the words of King Solomon in Ecclesiastes:

I returned and saw under the sun that the race is not to the swift, nor the battle to the strong, neither is there bread to the wise, nor riches to men of understanding, nor yet favor to men of knowledge, for time and fate will overtake them all...

Where to Channel Our Sadness

Drop Your Bags!
What Makes Eli Run?
The Tyranny of Materialism
Science Enters the Mysterious Inner World of Consciousness
Comments
MOST POPULAR IN Spirituality
Our privacy policy