To Never have Been Born: Ethics of the Fathers, 3:17 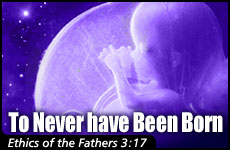 Taking the odds on eternal life.

Although the Talmud records literally hundreds of arguments between the scholars of the two academies, this particular dispute ended in an unusual resolution. After two-and-a-half years, Beis Hillel conceded the debate and accepted Beis Shammai's position that man would indeed have been better off had he never been born.

It is patently impossible to accept either Beis Shammai's opinion or Beis Hillel's agreement at face value. As Rabbi Akiva teaches in our mishna, there is no greater testimony than human existence to the Almighty's love for mankind. Indeed, by definition, anything God does is ultimately what is best for man. If so, what could the students of the two academies have meant?

THE FLIP OF A COIN

It's hard to imagine anyone making it through high school without hearing the following question: If a coin-toss yields ten consecutive results of "heads," what are the odds the next toss will also be heads?

The most common response among the uninitiated is one chance in ten. A more sophisticated wrong answer would compute the odds of eleven consecutive coin-tosses landing heads-up at one chance in 211, or 2048. By high school, however, most of us know that, regardless of prior results, the odds on any given toss are even money (assuming a fair coin).

These two ways of looking at the same case, either as an isolated event or as part of a sequence, provide a possible insight into the opinion of Beis Shammai. If the odds of a single event can be correctly computed as simultaneously 50% and 0.05%, perhaps Beis Shammai's opinion is not inconsistent with Rabbi Akiva's teaching after all.

Imagine that you possessed a diamond of inestimable value. Would you wager such a treasure on the toss of a coin for the chance of gaining an even more valuable jewel? Or would you consider it foolhardy to risk all you have for the chance to double or triple wealth already beyond measure?

This illustrates the reasoning of Beis Shammai, who understood that the Almighty placed man in this world to give him the opportunity to earn his reward in the World to Come. Rather than simply bestowing upon mankind the infinite pleasure of eternal life, God devised the means by which man could earn paradise, so that his eternal reward would not be tarnished by the shame of being undeserved.

However, Beis Shammai reckoned that even an imperfect paradise would offer such unimaginable pleasure that to risk losing it all for possibility of gaining more was a fool's wager. True, man could acquire a better portion of in the World to Come. But the chances of losing everything were too high to justify such a gamble. Better off to have never been born into the world of physical existence; better to retain a sure thing, albeit imperfect, than to risk more and end up with nothing.

The students of Hillel, however, looked at the matter differently. True, the fate of a single individual might be compared to the flip of a single coin. However, in His omniscience and omnibenevolence the Almighty would never have instituted a system designed to benefit mankind if mankind as a whole would not ultimately benefit. In the grand scheme of things, God knew that the gamble was worthwhile, that the result depended not on the toss of a fair coin but of a coin weighted, over the long run, in man's favor. Over the span of human history, the majority of mankind would earn a better portion and only a minority would lose.

So why did the students of Beis Hillel eventually come around to Beis Shammai's way of thinking? And how could either, no matter how compelling the logic of the argument, have ever suggested that God's plan was not in mankind's best interest?

With the Torah to guide us, and with sincere effort, Rabbi Akiva assures us that we cannot fail.

In any matter of perspective, an awareness of risk is essential to success. However great the profit one stands to gain may be, a single careless act can cause the loss not only of potential profit but of all one has invested. And so Beis Shammai and Beis Hillel eventually agreed concerning the necessity of maintaining constant focus on the consequences of miscalculation. To earn eternal reward takes a lifetime. To lose it requires only a moment.

In contrast, Rabbi Akiva chose to emphasize on the positive. Where Beis Shammai, and ultimately Beis Hillel, chose to focus on the consequences of transgression to guide us along the straight path, Rabbi Akiva pointed to the Almighty's creation of mankind as the unparalleled expression of unconditional love. Moreover, God did not merely create man in the way he created all living things, but fashioned man in His own image, combining within man's physical exterior a ly spiritual and Godlike soul. And even more, God conveyed to mankind the knowledge of its own ness, so that we might appreciate our own special destiny and know that, by entering into the conflict between the physical and the spiritual, we can prevail.

But still that is not all. The Almighty provided mankind not only with a spiritual nature and an awareness of that nature, but with an indispensable tool with which to succeed in his spiritual mission. God revealed to mankind His Will.

For all the peoples of the earth, the Divine Will takes the form of the Seven Noahide Laws, the basic prescription for human morality that includes prohibitions against murder, theft, idolatry, sexual immorality, taking God's name in vain, and cruelty to animals, as well as the establishment of a justice system to enforce them.

For the Jewish people, however, the Divine Will is expressed in the form of the Torah, the 248 positive commandments and 365 prohibitions that guide the Jew in the daily quest of elevating his physical nature to a level of spirituality.

There is no greater indication of God's love than the Torah He provided us to assure our victory in the battle of the soul. No matter how great the odds against us may seem, the Torah weights every toss of the coin in our favor. With the Torah to guide us, and with sincere effort, Rabbi Akiva assures us that we cannot fail.

The Babe Ruth of Kindness - Ethics of the Fathers 1:58 min read

Whom We Hurt: A Yom Kippur Preparation8 min read 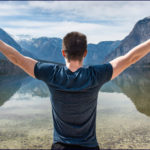 What The Angel Taught You21 min read

Which Road Not Taken?4 min read