The Expression of the Soul: Ethics of the Fathers, 3:14 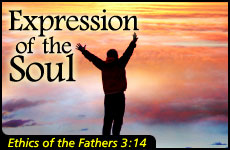 Discovering the bridge between heaven and earth.

Rabbi Dosa ben Horkenas said: Late morning sleep, afternoon wine, the chatter of the youth, and sitting in the gathering places of the ignorant drive a person out of his world. -- Ethics of the Fathers, 3:14

The kabbalists explain that the Almighty fashioned His world in four ascending levels of creation: mineral, vegetable, animal, and articulate. (The last translates literally as speaking.) The first three are familiar to anyone who has ever played "20 Questions." The fourth, however, seems a redundant subset of the third.

Furthermore, the quality of speech does not seem to describe a necessarily higher level. Most animals possess some form of communication. Bees communicate instructions to the hive, whales and dolphins exchange aural messages under the waves, even birds and insects attract mates by singing or chirping or buzzing. Why is speech demonstrative of a category of creation?

The answer becomes clear with an understanding of what the sages meant by the term speaking. All communication is not articulate, and all expression is not speech. Although we describe the sounds of animals as language because they transmit information, the sages understood dibur -- language -- as something much more profound.

True language is the expression of the soul.

Among the extraordinary abilities attributed to King Solomon, the wisest of all men, was the understanding of the language of the animals. By this, the sages did not mean to compare King Solomon with Doctor Doolittle. Rather, they meant that Solomon could identify what made every creature and thereby discern the purpose for which the Almighty had created it. Go learn diligence from the ant, says Solomon. Go and discover all that man can learn from the world around him.

Language, therefore, is not mere communication, nor even the arrangement of nouns, adjectives, and verbs into grammatical sentences. From the Torah perspective, language is the expression of higher thoughts, the formulation of ideas and ideals, the means through which man captures abstract vision and dream and aspiration and makes it all become real, somehow bridging the seemingly infinite distance between the heavens and the earth.

True language is the expression of the soul.

The highest calling of man, therefore, is to realize the potential that sets him apart from all creation through the faculty that makes him . The elevation of language -- clarity of expression, refinement of vocabulary, articulation of values, description of the divine -- these represent the highest level of human achievement. And every moment of life offers a priceless opportunity to achieve them.

In ancient times, human society equated daylight hours with productivity. (Indeed, according to modern physiologists, we remain hard-wired to be most efficient while the sun shines above us.) Consequently, the one who squanders the opportunity provided by every new day by sleeping away the morning is, in effect, abandoning the purpose for which he was created. Rabbi Dosa in our mishna anticipated Benjamin Franklin's old adage of early to bed, early to rise by almost 2000 years.

The one who indulges by drinking afternoon wine is much the same. It is true that the sages included wine as part of the most significant events in the Jewish lifecycle: Shabbos, festivals, bris milah, and marriage. Wine complements the most joyous events in the life of a Jew and should be enjoyed, not sanctioned.

However, wine also impairs the workings of the mind. Fuzzy thinking and slurred speech are only some of the most familiar effects of strong drink. Late in the evening, when work is done and one wants to wind down from the stresses of the day, there is no objection to moderate drinking. But in the midst of the day, when man has so much to accomplish, the drinking of wine will surely deter him from his purpose.

The most revered rabbis and scholars of previous generations seem to have possessed an ability to connect to children, to speak to them and understand them, to even retain the childlike love of life that attracts us to the young. However, the minds of the young are still immature. When an adult engages in the kind of chatter and indulges in the childish pleasures for which children are guiltless, here too he fails in his pursuit of spiritual greatness.

But sometimes the company of children is preferable even to the company of adults. When our mishna refers to gathering places of the ignorant, it does not mean merely the uneducated, but those who prefer to remain uneducated, who rejoice in their ignorance, who mock and deride those who strive for knowledge and wisdom. To enter willingly into their company is to abandon all hope of personal fulfillment.

Man was created to achieve, to give expression through speech and thought and action to the image of God that resides within him. The most direct path to success is by taking control of our power of speech and laboring to elevate and refine it. To embrace the obstacles that hold man back in the fulfillment of these goals is to reject the very reason for his existence. One who does so, Rabbi Dosa teaches, effectively drives himself from his world -- diminishing himself in this world and forsaking his portion in the next.

Conversely, a bright start, a clear head, engaging ideas, and the pursuit of perfection lead one to both the personal fulfillment and the eternal reward of a life well-lived.

Did You See Darya in the Stairwell?