Measuring Words: Ethics of the Fathers 1:11 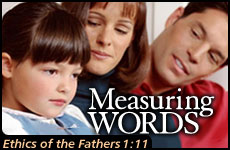 Our words can make or break our children.

"Avtalyon says: Wise Scholars, measure your words carefully, lest you incur the debt of exile and be exiled to a place of foul waters, causing your disciples to drink and die, thereby desecrating the name of heaven."

Avtalyon, the Torah authority of his day and head of the Sanhedrin, is addressing scholars -- the leading disseminators of Torah - and emphasizing the negative: avoid less than careful speech.

The higher up the ladder of spirituality we scale, the more important our every little action -- including our every little word. A rocket aimed for the moon might be off just a few inches at takeoff, but those few inches will turn into thousands of miles if uncorrected. Avtalyon's warning is stern, but he's pointing out the weighty responsibility people in positions of leadership automatically assume.

Avtalyon's message is also for those of us who may not (yet) literally be "wise scholars." Any parent is, in effect, a "wise scholar" to their child. And the words of a parent can make or break the child.

Psychiatrist and internationally renowned author, Rabbi Abraham Twerski, M.D., is a direct descendant of one a prestigious line of Hasidic Masters. In his semi-autobiographical "Generation To Generation," he tells about one of the formative experiences growing up in his home.

The young Abraham was worried what his father would do when he caught him one day doing something very wrong. The father told him three Yiddish words that stuck with him the rest of his life, Es pasht nisht, "It's not becoming." In those three words, Rabbi Twerski explains, an entire philosophy of parenting exists. His father did not berate him and tell him what a bad thing he did or what a bad kid he was. Just the opposite. He said three gentle words that resonated in the young boy's soul and told him he was better than how he had behaved. Those three words reflected an assumed goodness in his son that not only prevented him from doing what he did wrong again, but also became a rallying point for the boy's self-image that eventually blossomed into the wonderful person countless others have benefited from.

Our words can have the most far-reaching effect in any relationship, especially marriage. Even our tone of voice can be the make-or-break ingredient.

For example, a man walks into his house after a particularly lousy day at work and his wife asks him how his day went.

"What a miserable day!" he says with exasperation. "The boss got on my case, and when I finally headed home, the traffic was a nightmare. Worst of all, the car almost overheated. I had to turn off the air conditioner -- and it's the hottest day of the year. The car's not even three years old, and we haven't finished the payments on it, but we need a new car. I'm sick and tired. That's how my day went."

In that first minute he has already set the tone for the remainder of the evening.

Instead, he could answer in a funny, light-hearted way, setting an upbeat tone for the evening. "What kind of a day did I have? Terrific! Fantastic! My air conditioner broke down; the car is ready for the junkyard. What a wonderful day!"

Later, when his tension level is not at its peak, he can deal with his aggravation realistically.

When you cultivate a happy, joyful disposition you are going a long way toward ruling your moods. I'm not talking about denying your true feelings and never sharing them with your spouse. What I'm talking about is a simple technique. When you first come home and both of you are aware of the tensions and stresses in your lives, train yourselves to set a positive tone in the house no matter what. It will help you ultimately deal better with the other problems because a positive, joyful, healthy tone makes dealing with problems a different type of challenge. Everything else is bearable if you have that. The smallest things are unbearable if you don't.

Each of us has our own situation where we are a "wise scholar" to another, be it through parenthood, friendship, marriage, work or any other relationship. How we choose our words, and even our tone, will determine if we are truly accessing the "wise scholar" within.

Ultimately words are so powerful because the soul expresses itself primarily through language. The verse describing God's creation of the human being, "And He blew into the human an everlasting soul" (Genesis 2:7) is rendered by the authoritative Aramaic translation, Targum Onkeles, as: "And He blew into the human a speaking spirit." The "everlasting soul" is thus the "speaking spirit." A soul is the breath of God expressed through human speech.

A Midrash teaches that in the womb an angel teaches us the entire Torah, and when we're born it touches us on the lips, causing us to forget everything. The 16-century philosopher, the Maharal, explains that until the moment of birth the body and the soul are not completely fused. The reason the child forgets the Torah taught by the angel is that at the moment of birth the soul is being fused with the body, symbolized by the angel touching the child on the lips, the place of speech. Speech is thus the twilight zone between thought and action. Through speech we affect action or, conversely, thought --even our innermost thoughts. Speech is the midway point between thought and action, between the intangible and the material.

That's why it's so powerful. When used properly speech is the very breath of God passing through our minds and bodies, trying to express from the depths of our heart the divinity we sense pulsing within us.

And that's also why if it's misused it can cause such devastation -- even the ultimate devastation, the desecration of God's name, in Hebrew: chillul Hashem. The Hebrew word chillul literally means "hollow." A chillul Hashem "hollows" out and empties the world of God. The material world hollowed of God is a world like the world that existed before God blew His breath into the first human being. It's an empty world.

However, when we use our breath properly, we fill the world with God. The breath we send through the hollow passages of our vocal chords creates a transformation. We are no longer just a hollow, material body. We become the amplified expression of the Divine Image we are made in.

This article is dedicated to the continuing recovery of my father, Chaim Benyamin ben Esther.

In Service of the King: Ethics of Fathers 4:6

Your Self-Worth Is Being Messed Up by Ads and Social Media
Vayelech 5783: Regret and Repent
Rabbi Sacks: Focus On the Important, Not the Urgent
Put Your Foot Down: Are Human Feet Poorly Designed?
Comments
MOST POPULAR IN Spirituality
Our privacy policy
Aish.com Is Looking for Great Writers