The Location of the Soul: Ethics of the Fathers, 3:3 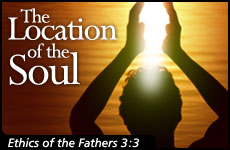 It is the quality of speech that separates us from all other forms of creation. Why?

Rabbi Chanina ben Tradyon said: If two people sit together and do not exchange words of Torah, it is a company of scorners, as the verse states, "In the company of scorners he [the righteous man] did not sit" (Psalms 1:1). But if two people sit and exchange words of Torah, the Divine Presence rests between them, as the verse states, "Then those who fear God spoke one to another, and God listened and heard, and a book of remembrance was written before Him, for those who fear God and contemplate His Name" (Malachi 3:16). From here we learn only about two; how do we know that even one who sits and studies Torah that the Holy One, blessed be He, allocates for him reward? For the verse states, "Let him sit alone and be still, so that [a reward] will be given to him" (Lamentations 3:28).

Ask almost any person to identify the location of his soul and he will point to his chest. Jewish tradition, however, teaches that the soul resides in the mind. And by explaining why the mind is the repository of the soul, we can begin to understand the divinity that sets human beings apart from every other creature with whom we share the earth.

Jewish philosophy identifies four ascending categories of creation: inanimate, vegetable, animal, and human. In the language of the sages, the classification of inanimate objects is called domaim, or "silent," while the classification of human beings is called midaber, or "speaking." It appears, therefore, that it is the quality of speech that separates us from all other forms of creation.

In fact, animals do possess the capacity to communicate. Dogs bark, horses neigh, elephants trumpet, and bees dance to guide their hives to sources of pollen. Dolphins and simians possess an extensive vocabulary and even a rudimentary grammatical structure.

The phenomenon of language, however, enables the speaker not only to communicate information, but to express a line of reasoning, to describe thoughts and feelings, to articulate abstract ideals, to probe the depths and expand the limits of the mind. George Orwell, in his famous novel 1984, depicted in frightening detail how control of language can limit, control, and destroy the human capacity to think. In Orwell's classic distopia, the government of Big Brother is designing a modern language, Newspeak, that will be stripped of the color, the nuance, and the imagination of language, thereby exorcising all color, nuance, and imagination from the minds of the citizens who speak it. Nothing will remain except the bare basics necessary for exchange of factual information, reducing all human communication to the level of chimpanzees.

Words are the medium through which our ideas shape themselves and direct our actions, and the words we speak define the essence of who we are and what we will accomplish. It is for this reason that the human mind contains the ly human soul: ultimately, it is our ly human intellect that, through the medium of language, enables each of us to forge a relationship with our Creator.

The sages record that when Rabban Shimon ben Gamliel, president of the Sanhedrin, instructed his servant Tuvi to go to the market and bring him something good, Tuvi returned with tongue. Rabban Shimon then asked Tuvi to go and bring him something bad, and again Tuvi returned with tongue. When Rabban Shimon asked Tuvi to explain himself, he replied, "When the tongue is good it is very good, but when the tongue is bad it is very bad."

Thus teaches Rabbi Chanina ben Tradyon in our mishna that speech is never neutral. The potential that we have to bind ourselves to the Almighty through words is incalculably precious, and to waste any opportunity to elevate our speech represents the worst kind of neglect. When two or more people sit together, the opportunity to stimulate the intellect through the language of ideas doubles and redoubles to a degree that the Divine Presence rests between them. Consequently, companions who allow their speech to devolve not only into the profane, but even into the mundane, are comparable to the scorners or cynics who dismiss all that is good in the world and see only the worst in everything.

Indeed, speech implies, by definition, the presence of at least one speaker and one listener, and the benefits of Torah are most completely realized through the spoken word of one companion to another. Nevertheless, should we suppose that the opportunity to elevate oneself through Torah is limited to exchanging ideas with another, Rabbi Chanina applies his principle even to an individual left to his own company.

Rabbi Noah Weinberg, dean of Aish HaTorah, often asks audiences which is more valuable: time or money? Invariably people place greater value on their time. Rabbi Weinberg then asks why it would never occur to them to throw their money out the window, whereas they think nothing of gazing through the window at nothing in particular for hours on end.

Our mishna reminds us that time is more precious than money, and that every moment provides an opportunity to elevate ourselves spiritually by applying our divine intellect to the study and contemplation of Torah. Even in solitude, by filling our thoughts with words of Torah we bring ourselves closer to the Almighty and enhance our ultimate reward in the World to Come.

Eight Ways to Banish the Darkness

Speak Nicely
What Makes Eli Run?
The Tyranny of Materialism
Science Enters the Mysterious Inner World of Consciousness
Comments
MOST POPULAR IN Spirituality
Our privacy policy