Honor and Disgrace: Ethics of Fathers 4:8 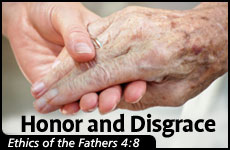 It's the little details that count.

What goes around comes around. As ye sow, so shall ye reap. You made your bed, now sleep in it.

The notion of “measure for measure” permeates the world of literature, folklore, and conventional wisdom, tracing its origins back as far as the Book of Judges, wherein the captured Canaanite king Adoni-bezek attributes his treatment by the Jewish conquerors to the way he treated the kings he had once conquered himself.

In fact, this concept is so familiar that the casual scholar might find himself wondering why Rabbi Yossi deemed it necessary to teach this lesson at all.

To appreciate the depth of Rabbi Yossi’s lesson, however, we must momentarily shift our focus away from his overall message and redirect our attention to the most innocuous of words: "any."

What constitutes honor and disgrace? In contemplating their definitions, we might reasonably conclude that our mishna refers primarily to grand gestures of one or the other. Donating large amounts of money to Torah institutions, attending lectures by rabbinic leaders or public tributes to Jewish philanthropists, and recognizing Torah scholars by according them the most distinguished honors in synagogue – these seem the kinds of honor of which Rabbi Yossi speaks. Conversely, any public violation of Jewish law or public insult to a Torah personality would constitute disgrace.

But Rabbi Yossi does not limit his messages to these; rather, he alludes to the kinds of practices that, on the surface, seem pedestrian and even mundane. To stand up in the presence of a Torah scroll or a Torah leader; to follow several paces behind the Torah when it is carried through the synagogue; to touch our fingers to its cover and then to our lips as a gesture of devotion; to remain silent and respectful when the Torah is read publicly; to keep ourselves focused and alert when we are learning Torah, whether alone or in the study hall – these are all examples of how we give honor to the Torah.

And what is disgrace? To leave a book of Torah literature open and unattended while we go off to conduct other business; to place a Torah book face down on the table or upside down on the shelf; to sit on a bench or table where books of Torah are resting; and perhaps worst of all, to neglect its study in favor of trivial and meaningless pursuits.

At first blush, our answer appears to strengthen our original question: could not Rabbi Yossi have found a more substantive message than urging us to emphasize minutiae that seem trivial themselves? Can we not better spend our time and mental energy by focusing our attention on larger themes and more universal codes of conduct?

Returning to the Book of Judges, we find a narrative that answers our question with a resounding no!

THE POWER OF PIETY

During the two centuries after their entry into the Land of Israel, the fortunes of the Jewish people had declined until an 18-year long Midianite occupation had left them impoverished and despondent. Responding to the crisis, the Judge Gideon raised an army of 32,000 men – an impressive force, although still dwarfed by the enemy contingent of 135,000.

Despite these odds of four-to-one against, the Almighty informed Gideon that his army was too large and commanded him to send away every man who lacked confidence. 22,000 departed, leaving Gideon and his remaining soldiers outnumbered more than a dozen-to-one.

Yet again the Almighty declared that the army was too large, instructing Gideon to lead his men down to the riverside and observe how they drank at the water’s edge. Those who knelt down or put their faces to the water should be sent away. Only those who reached down their hands to lift the water to their lips should remain. In the end, Gideon was left with an army of 300 men.

To understand the Almighty’s logic, we must first understand why the Jewish people had fallen under the rule of the corrupt nation of Midian in the first place. After settling the land and becoming immersed in the pursuit of material prosperity, the Jews had forgotten how Moses had warned them against attributing the source of their successes to their own prowess and ability. For the nation charged with mission of bringing greater awareness of God to the society of all mankind, such self-indulgence was tantamount to open rebellion.

A conventional military victory by Gideon and his army would inevitably reinforce the Jews’ misconceptions about their own power. Consequently, the Almighty orchestrated a kind of victory that would force the people to recognize that success depends not upon physical strength or military might but on collective merit earned through divine service and spiritual refinement.

Only through miraculous intervention could 300 expect to defeat a hundred thousand, and only the most pious individuals could expect to merit a miracle on that scale. But how was the Almighty’s criteria for choosing soldiers indicative of piety?

The soldiers who knelt down to drink, although certainly not sinful in any way, nevertheless demonstrated a minimal lapse in spiritual sensitivity. On the one hand, bowing down before one’s own image reflected in the water bore the faintest resemblance to idolatry; on the other hand, putting one’s face to the water to drink bore the slightest resemblance to the behavior of an animal.

This does not imply that the soldiers who knelt down to drink had done anything wrong. But an individual sufficiently pious to merit a miracle as extraordinary as that which would save the Jews had to possess such an acute and constant awareness of the divine spark within him that he could never bring himself to commit any act that even resembled idolatry or animalism.

THE REWARDS OF REFINEMENT

Under cover of night, Gideon led his 300 warriors to the perimeter of the Midianite camp. There he waited for the changing of the watch, when the recently awakened guardsmen would not yet be fully alert, thereby producing the maximum potential for confusion. Positioning themselves at intervals, Gideon’s men awaited a prearranged signal, then blew their shofars and held their torches high, creating the illusion of a vast attack force sweeping out of the darkness.

The Midianite soldiers at the edge of the camp panic and fled from their imagined attackers, while the soldiers further in concluded that those racing toward them were the enemy. In the darkness, comrades slew one another until the morning light revealed that all but 15,000 had been killed, with those survivors having taken flight and scattered.

The way one bends down to drink water may seem a trivial detail. Nonetheless, when we give our full attention to the minute details of our lives, we cultivate the same kind of refinement and sensitivity through which Gideon’s army merited their miraculous victory on behalf of the Jewish people. Little acts of respect make us more respectful people, which leads us to become models of respect, which gains us respect in the eyes of all who are able to discern genuine quality of character.

And so Rabbi Yossi comes to teach us that by treating the Torah with honor in every way, small and large, we transform ourselves into people who will not only inspire others to honor us but will be truly worthy of their honor. And conversely, by neglecting even the most seemingly trivial expressions of honor, we bring disgrace upon the Torah and, ultimately, upon ourselves.

Either way, we end up sleeping in the bed we make.

Looking into Other People’s Windows

The Chanukah Question
Is Grease the Word?
Dried Fruit Compote
Scientific Curiosity and the Divine Encounter
Comments
MOST POPULAR IN Spirituality
Our privacy policy
Aish.com Is Looking for Great Writers