The Roots of Wisdom: Ethics of the Fathers, 3:22 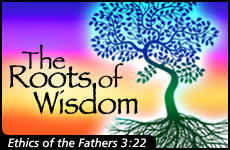 The preservation of scholarship requires the fertile soil of virtue.

[Rabbi Elazar ben Azariah] used to say: Anyone whose wisdom exceeds his good deeds -- to what is he similar? To a tree whose branches are many and whose roots are few; then the wind will come and uproot it and turn it over. As it is said: "And he will be like a lonely tree in a wasteland that will not see when good comes. It will dwell on parched soil in the desert, on a salted land, uninhabited" (Jeremiah 17:6).

But one whose deeds exceed his wisdom -- to what is he similar? To a tree whose branches are few and whose roots are many; even if all the winds in the world come and blow against it, they will not move it from its place. As it is said: "And he shall be like a tree planted by the water spreading its roots toward the stream, and it will not notice when heat comes. Its leaves will be fresh, in a year of drought it will not worry, and it shall not cease yielding fruit" (ibid., 17:8). (Ethics of the Fathers, 3:22)

On the surface, Rabbi Elazar's allegory appears easy to understand. Scholarship alone is not enough; only when wisdom influences action and produces virtue will it endure.

On closer examination, however, the image of a tree raises many questions. If wisdom is the source of action, why does the mishna not compare wisdom to the roots and good deeds to the branches? Just as roots draw sustenance from the earth to nourish the tree, similarly the roots in the allegory should represent the wisdom that fosters action.

Moreover, granted that wisdom is not enough, and that a person without good deeds is like a tree without adequate support, why does Rabbi Elazar describe a tree with few branches in the second part of his allegory? If a person has many good deeds, why do the "branches" of his wisdom still have to be "few"?

And why does Rabbi Elazar have to describe the wind? Would it not have been simpler to describe a tree so unstable that it is in danger of toppling under its own weight, even without the wind?

Finally, why does Rabbi Elazar prove his lesson with verses describing land that is either parched or abundantly watered? How does environment fit into his illustration of the tree's roots and branches?

THE ROAD OF GOOD INTENTIONS

Rabbi Abraham Twerski writes that when he was a boy, a visiting rabbi asked him the following question: Since the Torah equates thought with action, then thinking of a question should be the same as actually speaking it. "If so," concluded the rabbi, "you should be able to tell me the answer to the question that I am thinking."

The young Abraham Twerski offered the only reply that seemed to make sense: "I am thinking of the answer," he said.

Esoteric scholarship that is not firmly grounded in practical wisdom and disciplined behavior becomes first a distraction and ultimately a danger.

The Torah's equation of thought and deed is meant to impress upon us that thoughts are the first step toward actions and that actions are imperfect if performed without sincere intent. Nevertheless, thoughts alone are not enough -- we all know which road is paved with good intentions. Consequently, although wisdom is indisputably the source of actions, it is our actions that secure and preserve our wisdom. Unless properly channeled, wisdom may come to nothing; even worse, it may become twisted and corrupted through rationalization.

Understood this way, actions are indeed the roots that support wisdom and enable it to endure. By the same token, scholarship that is out of proportion with the measure of good deeds creates similar instability. Esoteric scholarship that is not firmly grounded in practical wisdom and disciplined behavior becomes first a distraction and ultimately a danger. One who dabbles excessively in theoretical studies with little relevance to everyday life can easily become so lost in his musings that he neglects the mundane but essential responsibilities of worldly existence.

Whether or not we like it, as human beings we are creatures of habit. This can work against us: we easily fall into routine, often fail to give our activities the full attention they require, and frequently resist thinking outside the box. But routine can work in our favor as well. Just as bad habits are broken only with difficulty, good habits propel us in the direction we ought to go even when our minds are elsewhere.

Why do star basketball players invest hours a day shooting free throws, and why do baseball sluggers stay late for extra batting practice? Because they understand that the more we practice the better we become, that the routine of repetitive action leaves an imprint upon our behavior from which we will benefit later on.

Similarly, the more good deeds we perform, the more we inculcate good behavior into our psyche, and the greater the likelihood that we will continue to conduct ourselves in the same manner. When the winds of temptation, of impulsivity, of self-interest, and of self-indulgence blow against us, the scholar will easily buckle before them unless he has trained himself in the performance of good deeds proportional to his scholarship.

THE WATERS OF VIRTUE

Why does one tree develop a complex root system when another becomes overgrown with branches? A tree that is planted near water easily stretches out its roots to absorb the ready supply of life-giving water that surrounds it. In contrast, a tree planted in parched soil sends its branches in all direction as it attempts to absorb moisture from the atmosphere. It's search for sustenance creates its instability.

Unlike trees, which have no control over where they are planted, human beings can choose their own environment. If one chooses to live among people unconcerned with the goodness of their deeds, then he will become like a "lonely tree in a wasteland that will not see good when it comes." Without support from a community committed to virtuous deeds, even if one studies Torah and increases his wisdom, his wisdom will not endure, for it will remain disconnected from the actions necessary to preserve and protect it.

However, if he "plants" himself in a community devoted to applying the wisdom of Torah into concrete actions, then he will flourish, without fear of depletion, and will always enjoy the spiritual fruits of his labors.

What to Include in an Ethical Will

Ten Ways to Get Up After We Fall