The Fear of Wisdom Ethics of the Fathers, 3:11 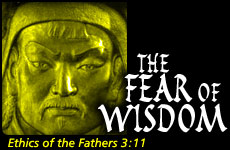 Can one be both wicked and wise?

Genghis Khan. Napoleon. Mao Zedong. Stalin. Mengele. Hitler. The list of evil geniuses could go on and on and on.

Which raises a question: how can genius be evil? How can human intellect, with all its potential to penetrate the mysteries of the natural world and harness the forces of human society, have such a poor track record harnessing the forces of good and overcoming the forces of evil?

In Jewish tradition, the word "wisdom" acquires markedly different nuances in different contexts, but its most neutral meaning relates to "expertise:" one who has reached the highest level in a field of study, in a craft, or in any discipline may be described as wise. Used this way, the term "wisdom" makes no moral judgments.

History records myriad examples of people whose extraordinary intellect, talent, and determination led them to inflict incalculable suffering upon their fellow human beings. According to our definition, then, wickedness seems to imply no contradiction to wisdom. On the contrary, it would seem perfectly reasonable to interpret wickedness as a product of wisdom.

WE HAVE NOTHING TO FEAR BUT ...

In one of its most famous statements, the Talmud tells us that, "Everything is in the hands of Heaven except the fear of Heaven."

In a lesser known statement, however, the Talmud tells us that "Everything is in the hands of Heaven except for cold and heat."

Whereas the first statement appears self-evident, so obvious that it hardly warrants Talmudic acknowledgment, the second statement is baffling. Is there anything less under our control than the weather? And how can there be two things, each of which is the only thing not in the hands of Heaven?

In truth, the Talmud is not contradicting itself at all. With their profound sensitivity to the subtleties of language, the sages referred to the afterlife as Olam HaEmet -- the World of Truth -- while our physical world they called Olam HaSheker -- the World of Falsehood. Those things considered by most to be the measures of success in the physical world -- wealth, fame, power, and beauty -- are in fact deceptions, distractions that turn the hearts of men away from the measures of true success -- integrity, respect, compassion, and love.

THROUGH A MIRROR, CLEARLY

What lesson did the sages intend to teach us? The answer comes from recognizing that the two things that they taught are outside the control of Heaven -- temperature and the fear of Heaven -- are not two separate things at all, but two sides of the same coin.

Everything that happens to us is guided by Heaven, but the choices we make, both physical and spiritual, are in our own hands.

Needless to say, man has no control whatsoever over the weather. But the sages did not say weather; they said cold and heat. Even in the fiercest blizzard, man has the ability to insulate himself from the environment, either by adding layers of protective clothing or simply by remaining indoors. Similarly, even in the most unrelenting heat man can dress in breathable cotton and position himself in the shade. Although we cannot control our environment, we can control the way we respond to it.

Just as man can choose the way he responds physically to the conditions in which he finds himself, so too can he choose the way he responds spiritually. As much as we might often like to excuse our behavior as inborn or beyond our control, the truth is that, as human beings, we have the capacity to choose whether we lash out in anger or hold our temper, whether we treat those around us with respect or with disdain, whether we deal honestly or dishonestly with others -- or with ourselves.

This is what the sages meant when they referred to the fear of Heaven: the combination of a clear moral compass and the call of the conscience, the willingness first to determine what is right and then to follow through by doing what is right. Everything that happens to us is guided by Heaven, but the choices we make, both physical and spiritual, are in our own hands. And so are the consequences of our actions.

Rabbi Chanina comes to teach us that true wisdom, enduring wisdom, wisdom that changes the world for the better and determines the difference between history's most notorious criminals and its most admired heroes -- that is the wisdom that rests on a foundation of fear of sin, which is the fear of choosing contrary to the will of Heaven.

Similarly, one can equate the study of Torah with the mere acquisition of information and the pondering of intriguing syllogisms, but this is not true wisdom, nor will it produce any lasting benefit. Conversely, the Almighty Himself guarantees the Jew who studies Torah in order to unlock the secrets of the Divine Will a successful transformation into a true Man of Wisdom. Any Jew who acquires wisdom thus will not only improve the quality of his own life but will elevate the world around him through a life well-lived.

Such is the only wisdom that truly endures.

It's Good to Be Alive

Purim: How to Live a Happy and Meaningful Life

Give It All You've Got

The Eye That Sees