The Security of Wisdom: Ethics of the Fathers, 2:19 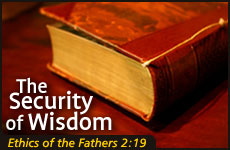 To understand why we believe what we believe, know how to answer a heretic.

Rabbi Elazar said: Be diligent in the study of Torah, and know how to answer a heretic; know before Whom you toil; and that your Employer may be relied upon to compensate you fairly for your labor.
Ethics of the Fathers, 2:19

Traveling through Europe, the revered sage Rav Yisroel Salanter arrived at an inn where he was accustomed to stay. To his great surprise, he discovered that the innkeeper, previously a devoutly religious man, had lapsed in his observance of Torah. When Rav Yisroel asked the reason, the innkeeper replied that one of his guests, a coarse and irreligious person, had openly cursed God and declared, "If the Almighty truly exists, let Him prove it by striking me dead this very instant."

When nothing happened, the innkeeper concluded that there must indeed be no God, since how could the Almighty allow His holy Name to be so publicly desecrated and not respond?

Rav Yisroel listened to his story without comment, then allowed the conversation to continue on to other topics, among which was the daughter of the innkeeper. The father overflowed with pride as he talked about his daughter, an accomplished violinist, who was returning that day from a tour with some of the finest orchestras in Europe.

Some hours later the daughter arrived, and the innkeeper hurried to present her to Rav Yisroel. "Your father has been telling us that you are a virtuoso," said the sage. "Would you be kind enough to play a bit so I can decide for myself whether you are as talented as you father claims?"

The young woman's polite expression changed instantly to contempt. "How dare you ask me to prove my talent to you," she exclaimed. "My reputation is well established among all the prominent musicians of Europe. I needn't prove myself to every layman who demands me to."

Rav Yisroel calmly turned to the father. "And what do you say to your daughter's answer?"

"She's perfectly correct," answered the innkeeper. "All the musical community knows who she is and how she can play. Why should she have to convince every skeptic who demands proof of her talent?"

"I agree with you completely," said the rabbi. "But tell me then, why do you insist that the Almighty responds to every skeptic who doubts His existence? He is known to the greatest minds among all mankind, recognized by pious and righteous people the world over, and yet you question His existence because He refuses to prove Himself to some low character without the wisdom to acknowledge that He is the Master of All?"

The innkeeper, humbled by Rav Yisroel's demonstration, repented his lapse of faith and returned to his former standard of Torah observance.

Be diligent in the study of Torah

Rabbi Elazar, the last and greatest of Rabban Yochanon ben Zakkai's five primary disciples, begins his summation of the principles he learned from his master with a seemingly obvious instruction: be diligent in the study of Torah. Knowing that his reputation might lead others to believe that his accomplishments in scholarship resulted solely from natural genius, Rabbi Elazar teaches us that wisdom is not a gift with which one is born, but a quality that one can acquire through disciplined study and the pursuit of Truth.

Yes, there are born geniuses, but even the most gifted intellect may never become wise if that intellect is not harnessed through hard work and personal integrity. Indeed, Torah study is not like the study of math or science or history; the goal of Torah study is to become a more spiritually sensitive, morally upright individual, a goal only realized through a diligence directed toward both the acquisition of knowledge and the implementation of that knowledge toward living a virtuous life.

and know how to answer a heretic

True Torah wisdom requires that we not only know Jewish law but that we understand why we believe that Torah is the only path for us to follow. Lacking that understanding, we become like the innkeeper in the story of Rav Yisroel Salanter, with our faith so precarious that any skeptic can topple it from its foundations.

This is the difference between belief and faith: faith may be blind, whereas belief is based in knowledge, in an understanding of why we believe what we believe, and how we can respond to the objections of non-believers. Note that Rabbi Elazar does not say that one must always respond to a heretic, for sometimes it does more harm than good to accord a heretic credibility by acknowledging his heresies. But whether in any given circumstance it is better to argue or to ignore, always the commitment Jew must know how to answer, so that his own belief is not eroded by attacks from the faithless.

know before Whom you toil; and that your Employer may be relied upon to compensate you fairly for your labor

This security of belief and the confidence it provides lead to the second and third stages in Rabbi Elazar's summation: Like a farmer toiling to bring his harvest in from the fields or an executive working late to meet a deadline, divine service sometimes demands that we push ourselves to the limit of our abilities. The farmer does not begrudge his labor in the field when he knows the value of his harvest, nor does the executive resent his work in the office when he considers the payoff of landing a multimillion dollar account. So too can the Jew motivate himself by remembering before Whom he toils, that he is performing a job far more substantial than any office work, and that he stands to receive compensation far greater than the most lucrative account.

It has been said that no one ever died wishing they had spent more time in the office. But to look back at the end of one's life on opportunities missed to enjoy one's family, to contribute to one's community, to develop a closer relationship with the Almighty -- that must be a painfully tragic experience, all the more so because it is too late to go back.

Know before Whom you toil, teaches Rabbi Elazar. Neither your boss in the office nor the false gods of wealth and status and leisure time can be trusted to compensate you when you face your Final Retirement. Be diligent in your spiritual growth and your cultural heritage, for it is these alone that will bring you true fulfillment and assure your ultimate reward.

Uncluttering the Mind Ethics of the Fathers, 3:10
Can You Show Me This "God?"
How to Become Immortal
Judaism and Mental Health
Comments
MOST POPULAR IN Spirituality
Our privacy policy
Aish.com Is Looking for Great Writers