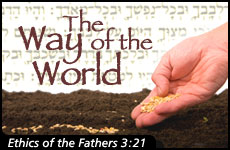 The road to fulfillment has no beginning and no end.

When in Rome, do as the Romans.

Of course, if the Romans are indulging in gluttony, idolatry, class oppression, religious persecution, adultery, wars of aggression, and genocide, then one might consider whether it's a good idea to go to Rome in the first place.

Nevertheless, many sources in Torah philosophy address the need to respect communal practice, whether by conforming to prevailing custom, by accepting established authority, or by conducting oneself with modesty. In our Mishna, Rabbi Elazar ben Azaryah reframes to the topic by underscoring the importance of derech eretz -- literally the way of the land.

In the most general sense, derech eretz translates as "worldly involvement." In common usage, however, the term has four distinct meanings. First, it refers to refinement of character and the development of desirable personality traits. Second, it refers to a vocation or livelihood, the way of supporting oneself by earning a living. Third, it refers to an appreciation of secular culture, such as natural sciences, literature, art, and music. Finally, it refers to the physical intimacy between husband and wife.

How can one expression possess so many different meanings? And which is the meaning Rabbi Elazar ben Azaryah intended for us to understand here?

FOLLOWING "THE WAY OF THE LAND"

In purely metaphysical terms, a Jew has no higher purpose than to study the Torah. By delving into the depths of the Almighty's revealed word, we have the opportunity to re-create ourselves in the Divine Image. By opening our minds and our hearts to the will of our Creator, the study of Torah offers the surest way of enabling us to refine our personal qualities.

Similarly, Torah study provides us with a sense of ultimate direction and purpose. Does one work to live or live to work? Without the Torah as our guide, we have neither awareness of the reasons for our existence nor compass by which to set a purposeful course through life. Our work comes to define us and, if we let it, to ultimately consume us.

Although we are essentially beings of spirituality, we live in a physical world and must grapple with the physical realities of our existence. However, the values of secular culture that confront us daily frequently contradict the Torah values that are our only reliable guide to living a spiritual life. Secular culture benefits us only when it is like a handmaid to the Torah, serving where it can make a contribution but never asserting any will of its own.

Finally, the goal of a spiritual person is to achieve a profoundly intimate relationship with the Divine. Such a relationship is defined by acquiring a greater concern for another than for one's self. God's creation of the physical world stemmed from His profound love and His profound goodness; He gains nothing for Himself by having created us or the world in which we live. His only desire is for us to benefit from the ultimate reward that we have the opportunity to earn by living virtuous lives in this world. And it is only by striving to acquire such a quality of selflessness that one is able to have a truly meaningful relationship in marriage.

It is an oversimplification, however, to assert that derech eretz is unattainable without Torah. The relationship between the two is reciprocal and symbiotic.

Just as one cannot achieve refinement of character without the Torah as a guide, one cannot benefit from the study of Torah without a genuine commitment to transform his character. If one does not desire change, a purely intellectual approach to Torah scholarship is unlikely to ever change him at all.

Even the sacred study of Torah has its goal -- to become a more spiritual person by emulating one's Creator.

As much as one must remember the reason why he toils in pursuit of physical support, the Torah itself benefits from his toil. Lest Torah study devolve into an abstract occupation divorced from any higher purpose, involvement in a vocation allows man to retain a constant awareness that all purposeful effort is goal-oriented; even the sacred study of Torah has its goal -- to become a more spiritual person by emulating one's Creator.

Additionally, without a basic familiarity with the natural world and world culture, one has no context in which to apply the lessons of Torah in any practical way. Not only in mathematics and science, but also in business, agriculture, design, and social interaction must the mechanics of the field be known before the laws and lessons of the Torah can be accurately applied to them. So too will an appreciation for artistic expression produce a sensitivity for aestheticism that allows the beauty of Torah to be more greatly recognized.

Finally, the intimacy of the relationship between husband and wife makes possible an understanding of the spiritual intimacy that can be achieved between man and the Almighty.

THE SYMBIOSIS OF THE WORLD

Having posited the symbiosis of Torah and derech eretz, Rabbi Elazar goes on to list a number of other factors in the human condition that are complementary and interdependent.

Next on the list are wisdom and fear of God. The term "fear" in this context does not describe terror but the awe that derives from an appreciation of the unequalled power and the unfathomable kindness that define the Almighty. Just as a five-year-old child cannot begin to comprehend the power of nuclear fusion or the vastness of the universe, without a fundamental understanding of the Creator and His creations it is impossible for any human being to contemplate the grandeur of the Master of the World.

Conversely, even the most brilliant mind is not truly wise if it fails to recognize the higher authority that is the foundation of the universe and the accompanying obligations. The ancient Greeks developed the highest levels of philosophy and aestheticism, but their culture vanished because they saw themselves as the pinnacle of creation. The ancient Romans built unstoppable armies and sophisticated civic infrastructures, but their lust for ever-greater power and riches led to the disintegration of their empire. Employing wisdom without fear of God, the Nazis constructed the most efficient machinery of mass-murder in the history of the world without reflecting for a moment upon the depths of the evil they perpetrated upon mankind.

Similarly are reason and understanding intertwined. The linear reasoning of pure logic can take us step by step to utterly wrong conclusions without the compass of holistic understanding to point us in the right direction. On the other hand, the clear vision of a desired destination brings us no closer to his goal unless we are able to discern the means of getting there.

Finally, Rabbi Elazar brings us full circle. Indeed, the Torah itself has already declared that man does not live by bread alone, but by all that comes forth from the mouth of God. Nevertheless, neither can man survive without bread -- without flour -- the staff of life that supplies the physical needs of man so that his soul might flourish and his spirit might soar.

If man fails to tend to his physical needs, he cannot live the Torah life. However, if he lives without tending to his spiritual needs, he will live not even half a life, for all the physical sustenance the world has to offer will never satisfy his spirit and his soul. Only by integrating the disparate parts within himself will man truly become whole.

Sticking to Your Resolutions

Learning To Fall: A Rap Music Video
Don’t Believe in Other Gods Versus God is One
Seeing Without Eyes
Why Shouldn’t We Eat Whatever We Want?
Comments
MOST POPULAR IN Spirituality
Our privacy policy
Aish.com Is Looking for Great Writers