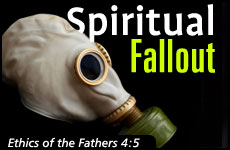 What the Chernobyl disaster teaches us about the unseen consequences of our actions.

Rabbi Yochanan ben Beroka used to say: Whoever desecrates the Name of Heaven in secret will have punishment exacted from him in public. Whether unintentional or intentional, there is no distinction regarding desecration of the Name. -- Ethics of Fathers 4:5

"Sanctify yourselves to Me!" commands the Almighty (Leviticus 19:2). But what is sanctity? Like its synonym, holiness, it is an ideal we find too abstract and too distant for successful implementation into our everyday lives.

The Hebrew word kedusha, commonly translated as "holiness" or "sanctity," literally means "separate." The Almighty is called HaKodosh – the Separate One – to describe a nature entire removed from all physical existence and limitations. The command "V'nikdashti – Sanctify Me among the Children of Israel" – describes the Jewish national mission of revealing the divine and separate nature of the Creator and the wisdom of His laws before the eyes of all the world.

We strive to fulfill this lofty purpose not merely by adhering to God's commandments, but by resisting the downward pull of our physical natures and elevating ourselves in pursuit of spiritual ideals and spiritual goals. To the degree we succeed, we bring about a kiddush HaShem – a sanctification of God's name, as we demonstrate His separateness through our own.

But just as the earth's gravity pulls us inexorably downward, the material nature of our world exerts its constant attraction, seeking to draw us away from the calling of our supernal souls. And if we surrender ourselves to the influence of the material world by compromising our spiritual values, then we create a chalal – a spiritual void that implies randomness and purposelessness, perpetuating the illusion of spiritual and moral anarchy. By doing so, we bring about a chilul HaShem – a desecration of God's name by suggesting that there is no transcendent reality.

Consequently, the committed Jew conducts himself with an awareness that the eyes of the world are upon him, that the nations of the earth will judge him not only according to his inner righteousness but according to his appearance of righteousness. Where others may be excused for moral mediocrity, the Jew knows that he will be held to a higher standard, and that even the perception of impropriety will reflect poorly on himself, on his people, and on his Creator.

UNSEEN, BUT NOT UNFELT

But what if we indulge our physical natures not in public but in private? How easy is it for us to rationalize that, since no one sees us, no one will be influenced by our actions? Rabbi Yochanon comes to teach us the folly of such reasoning.

Two decades ago, the partial meltdown of Russia's Chernobyl reactor demonstrated the horrors of our atomic age. Invisible, odorless, and undetectable to the human senses, the radioactive gas released in history's worst nuclear accident took the lives of all those unfortunate enough to have been caught in its caustic tide. And for years after, those living in proximity to the reactor's sarcophagus suffered the maladies of radiation poisoning.

In spiritual reality, our actions can have an impact as profound as nuclear fallout.

In spiritual reality, our actions can have an impact as profound as nuclear fallout. And so our mishna comes to teach that there is no such thing as a victimless crime. Every action, public or private, sends ripples across the fabric of the universe as surely as a stone breaking the surface of a pond. Although we may not perceive any direct cause and effect, even the most private desecration of God's name pollutes our earthly environment with spiritual toxicity as devastating to our souls as nuclear radiation to our bodies.

Moreover, the person who imagines the harmlessness of his private misdeeds may cause a particularly insidious kind of spiritual damage. Because neither he nor those whose world he infects through his actions recognize the poison that seeps undetected into their lives, they will carry on as if all is well, never considering the silent menace attacking their spiritual well being.

For this reason Rabbi Yochanon warns of the measure-for-measure decreed by the Heavenly Tribunal: only by through public retribution can the hapless transgressor and those affected by his actions acquire the opportunity to consider the danger that threatens them. Only by contemplating the infallibility of divine justice can any of us stop long enough to consider our own actions, not merely according to the letter of the law but according to the spirit of absolute morality.

THE ROAD PAVED WITH ALL INTENTIONS

Finally, Rabbi Yochanon reminds us that intention is irrelevant to the consequences of desecrating God's name. A chef who carelessly mixes tainted ingredients into his cooking sends his customers to the emergency room in a condition as dire as if he had consciously poisoned them. This chef may have contemplated nothing other than a gourmet meal, but the unfortunate diner whose life hangs in the balance has little interest in his motives. The consequences of his negligence might just have well been premeditated, and so he is held accountable to the highest degree.

If the power of action can cause harm through spiritual carelessness, however, how much more so can it produce benefits through spiritual loyalty and commitment. As King Solomon says, "A little light may dispel much darkness," and the ripples generated by a kiddush HaShem, a sanctification of God's name, travel much farther and produce far greater effect than the fallout caused by any desecration.

And if even a private sanctification of God's name can elevate the world, how much more so will a public kiddush HaShem flood the world with spiritual light, illuminating our earthly sphere even for those who did not witness the action itself, penetrating the veil of nature and happenstance, and opening their eyes to the divine presence that resides among us.

Tisha B'Av: The Root of Destruction

Smile Though Your Heart Is Aching: Ethics of the Fathers 1:15

Do You Believe God Believes In You?
The Softball Player
How This 6 Generation Bread Baker Brought Back Israel’s Ancient Grains
Olivia Newton John’s Grandfather was a Nobel-Prize Winning Jewish Physicist
Comments