Spiritual Vertigo: Ethics of the Fathers, 2:14 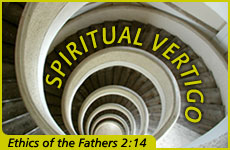 Protecting oneself from spiritual myopia.

[Rabban Yochanon] said to [his students]: Go and see which is a bad way that a person should avoid.

[Rabban Yochanon] said to them: I prefer the words of Elazar ben Arach over your words, for included in his words are all of yours. (Ethics of the Fathers, 2:14)

After having explained in our previous mishna the five opinions concerning the "good path," we find this mishna seemingly superfluous. Once the students of Rabban Yochanon have identified the good path, is it not obvious that the opposite is the bad path?

Furthermore, once their master declared his preference for Elazar ben Arach's answer of "a good heart," why do the other students seem to persist in their earlier interpretations? Finally, since four of the students answer this second question in simple opposites from their earlier answers, how do we understand Rabbi Shimon, who apparently departs completely from his previous answer, "to foresee consequences"?

Although most people find it convenient to see the world in simple black and white, a true perspective of reality requires us to appreciate that life is not so clear cut. Whereas a person who is generous may be good, a person who lacks generosity is not necessarily evil. Whereas a teacher possessing a dynamic personality may be described as "good," another teacher who is soft-spoken but quietly engaging may be equally "good."

Rabbi Paysach Krohn tells the story of an Israeli fighter pilot assigned as an attack leader. His job required him to enter into a steep dive, site each target for the assault planes behind him, then pull sharply up and away from the glide path of the missiles that followed him in.

On one occasion, under the tension of precipitous descents and multiple force recoveries, the pilot's mind became confused by the effects of vertigo. Unknown to him, his plane had become turned upside down as he led another attack.

The pilot sited the target and, as he pulled back on his controls, his eyes locked in disbelief on his instrument panel, which showed that he was rapidly losing altitude and within seconds would plummet into the ground. His back-up instruments confirmed the reading, but his mind refused to accept what his senses refused to register as the effects of vertigo denied the information on his panel.

He pushed his controls forward, convinced with every ounce of intuition that he was committing suicide by driving his plane into the ground.

With lightning reflexes, the pilot radioed his pursuit plane, asking for an evaluation of his position. Yes, came the voice over his radio: you are in steep descent and only moments away from impact.

The pilot faced a dilemma, with literally no time to contemplate his options. Which should he trust: his interior senses or external objective information?

The pilot later described how what he did next as being the hardest thing he ever did in his life. He pushed his controls forward, convinced with every ounce of intuition that he was committing suicide by driving his plane into the ground. Instead, he pulled safely out of his dive and survived.

Rabbi Krohn concludes his story suggesting that we all suffer from spiritual vertigo, often believing our senses even when they are clearly contradicted by objective external reality. Similarly, as much as the students of Rabban Yochanon recognized in the previous mishna the necessity for spiritual clarity, so too did they now appreciate the dangers of spiritual myopia.

Even though Elazar ben Arach had received his master's approval for his answer of a "good heart" -- that spiritual clarity is a process in which no step is complete without all the others -- nevertheless, the first four students each focused on the single step they believed most disruptive to that process.

Thus Rabbi Eliezer says a "bad eye," meaning not only the inability to perceive God's spiritual light, but the predisposition to misinterpret the light of spirituality. Such a defect, asserts Rabbi Eliezer, can only result in spiritual vertigo, the conviction that one is walking the "good path" when in fact he is on the road to spiritual devastation.

Rabbi Yehoshua, however, declares that the answer is a "bad friend." Since we are all at time subject to spiritual blindness and vertigo, our greatest danger lies in not receiving sound advice from those in whom we place our trust at moments of crisis.

No, says Rabbi Yossi, the greatest danger lies in a "bad neighbor," one who does not recognize or respect the boundaries between advice and intrusion, who seeks to impose his own perception of the spiritual light into situations that he himself does not fully understand, creating confusion and uncertainty where there might otherwise have been clarity and confidence.

Whereas Rabbi Shimon previously asserted that walking the "good path" depended upon looking ahead toward the future and anticipating the consequences of action, now he answered that the "bad path" lies before the one who "borrows and does not pay back."

A closer look, however, reveals that Rabbi Shimon is answering in kind, for the one who borrows without knowing how he will repay creates for himself the situation wherein he fails to honor his debt and repays the lender's good with evil. According to Jewish philosophy, ingratitude is among the most reprehensible of all character traits. Indeed, the Hebrew for gratitude is haKorat haTov, literally recognition of the good. Such recognition truly requires a "good eye" and, in the case of the borrower, requires that he foresee the outcome of his actions before he borrows so that he does not, through negligence, fail to recognize the good.

Once again, however, it is Rabbi Elazar alone who sees the whole picture. All of his fellow students are correct in their insights. Nevertheless, it is ultimately the synthesis and integration of all the qualities and stages they described that will protect a person from embarking down the "bad path." The dangers of spiritual vertigo are many, and the spiritual eye can be deceived by many tricks of the light. If we allow our attention to stray even for a moment, if we lose our focus even for an instant, we risk straying into spiritual darkness. By accustoming our inner eye to the light of the Torah we provide ourselves with the surest chance of staying true to the "good path."

When You Hate Yourself

Whom We Hurt: A Yom Kippur Preparation

How I Achieved My Personal Breakthrough

Go Out with Your Spouse and Kids
The Promise Of The Land
Which Chat Are You On?: Parshas Behar/Lag Ba’Omer
Do You Like Slow-Cooked Food? Thank the Jews
Comments
MOST POPULAR IN Personal Growth
Our privacy policy