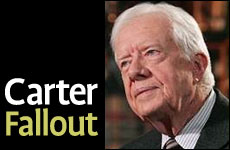 This note is to inform you that yesterday, I sent letters to President Jimmy Carter, Emory University President Jim Wagner, and Dr. John Hardman, Executive Director of the Carter Center resigning my position, effectively immediately, as Middle East Fellow of the Carter Center of Emory University. This ends my 23 year association with an institution that in some small way I helped shape and develop.

My joint academic position in Emory College in the History and Political Science Departments, and, as Director of the Emory Institute for the Study of Modern Israel remains unchanged.

Many still believe that I have an active association with the Center and, act as an adviser to President Carter, neither is the case. President Carter has intermittently continued to come to the Arab-Israeli Conflict class I teach in Emory College. He gives undergraduate students a fine first hand recollection of the Begin-Sadat negotiations of the late 1970s. Since I left the Center physically thirteen years ago, the Middle East program of the Center has waned as has my status as a Carter Center Fellow. For the record, I had nothing to do with the research, preparation, writing, or review of President Carter's recent publication. Any material which he used from the book we did together in 1984, The Blood of Abraham, he used unilaterally. President Carter's book on the Middle East, a title too inflammatory to even print, is not based on unvarnished analyses; it is replete with factual errors, copied materials not cited, superficialities, glaring omissions, and simply invented segments. Aside from the one-sided nature of the book, meant to provoke, there are recollections cited from meetings where I was the third person in the room, and my notes of those meetings show little similarity to points claimed in the book. Being a former President does not give one a privilege to invent information or to unpack it with cuts, deftly slanted to provide a particular outlook. Having little access to Arabic and Hebrew sources, I believe, clearly handicapped his understanding and analyses of how history has unfolded over the last decade. Falsehoods, if repeated often enough become meta-truths, and they then can become the erroneous baseline for shaping and reinforcing attitudes and for policy-making. The history and interpretation of the Arab-Israeli conflict is already drowning in half-truths, suppositions, and self-serving myths; more are not necessary. In due course, I shall detail these points and reflect on their origins.

The decade I spent at the Carter Center (1983-1993) as the first permanent Executive Director and as the first Fellow were intellectually enriching for Emory as an institution, the general public, the interns who learned with us, and for me professionally. Setting standards for rigorous interchange and careful analyses spilled out to the other programs that shaped the Center's early years. There was mutual respect for all views; we carefully avoided polemics or special pleading. This book does not hold to those standards. My continued association with the Center leaves the impression that I am sanctioning a series of egregious errors and polemical conclusions which appeared in President Carter's book. I can not allow that impression to stand.

Through Emory College, I have continued my professional commitment to inform students and the general public about the history and politics of Israel, the Middle East, and American policies toward the region. I have tried to remain true to a life-time devotion to scholarly excellence based upon unvarnished analyses and intellectual integrity. I hold fast to the notion that academic settings and those in positions of influence must teach and not preach. Through Emory College, in public lectures, and in OPED writings, I have adhered to the strong belief that history must be presented in context, and understood the way it was, not the way we wish it to be.

In closing, let me thank you for your friendship, past and continuing support for ISMI, and to Emory College. Let me also wish you and your loved ones a happy holiday season, and a healthy and productive new year.