Let Our Spirits Soar: Ethics of the Fathers, 4:4 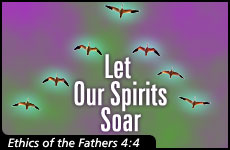 Acquiring the confidence that comes from true humility.

Rabbi Levitas of Yavneh says: Be extremely humble of spirit, for the hope of man is worms. Ethics of the Fathers, 4:4

Jewish folklore tells of a traveler who found himself in a strange town one Yom Kippur. As the service progressed, the visitor looked on in mild astonishment as the local rabbi threw himself prostrate before the Holy Ark and cried out with evident anguish, "Master of the World, please forgive my sins. I am like dust and ashes before You. I am no one; I am nothing!"

The rabbi then rose to his feet, after which the president of the synagogue threw himself before the Ark and similarly cried out, "Master of the World, please forgive my sins. I am no one; I am nothing!"

Assuming that this was the local custom, the stranger followed the others' example and cast himself prostrate before the Ark, declaring, "Master of the World, forgive me; I am no one, I am nothing!"

Upon which, the president gently elbowed the rabbi in the ribs and muttered contemptuously, "Look who thinks he's nothing."

THE CURIOUS NATURE OF THE HUMBLE SERVANT

Humility is a frequently misunderstood quality. The Torah describes Moses as the most humble man who ever lived. Not such a surprising statement, except when we consider that it was Moses himself who penned the Torah as God dictated it.

To complicate matters further, Moses also wrote – according to God's word – that no one before or after ever attained a level of prophecy equal to his own. How could Moses have remained truly humble after writing such things about himself?

I cannot take credit for my own innate potential or for the opportunities that have positioned me for success.

In truth, there is no contradiction at all in Moses' conduct. Humility is neither self-deprecation nor a denial of one's own abilities and accomplishments. Rather, humility stems from the recognition that I cannot take credit either for my own innate potential or for the opportunities that have positioned me for success. Whatever resources have been granted me are gifts from God and, as the recipient of such gifts, I have an obligation to use them to the extent of my ability in the service of my Creator.

The humility of Moses, therefore, did not compel him to negate his own greatness, but to assume that anyone else so endowed might have performed as well or better. Neither did Moses look down on those less capable or talented than himself. Rather than arrogantly measuring himself in comparison to others, he assumed that others were fulfilling 100% of their own potential while he, Moses, would be expected to achieve more for having been granted more potential to achieve.

WHAT HOPE IS THERE FOR MAN?

The subtlety of Rabbi Levitas's message in the mishna, however, requires us to investigate certain anomalies in his language. First, there is the term he uses for "humility;" rather than employ the more common Hebrew word anavah, he uses the term sh'fal ruach, literally "a lowly spirit." If Rabbi Levitas wishes to teach us the importance of humility, why does he not simply say so?

Second is Rabbi Levitas's use of the word we translate as "man." Rather than the more familiar adom or ish, Rabbi Levitas employs the arcane enosh, an expression implying human frailty and mortality.

Finally, Rabbi Levitas warns that, "the hope of man is worms." As a dark admonition against the dangers of hedonistic excess, the image of a body moldering in its grave powerfully evokes a sense of dire consequence. But if this is Rabbi Levitas's message, why does he not say that the "end of man is worms" or "the fate of man is worms"? Why does he interject an expression of hope into so morbid a message?

We have already explained that humility derives from a sense of obligation and purpose. The expression of sh'fal ruach – a lowly spirit – forces us to confront the quality of humility on a more personal and immediate level.

If simple humility, or anavah, manifests itself as a recognition of personal responsibility, then sh'fal ruach describes a state of mind wherein a person fears that idleness or misuse of the gifts he has received will result in the most severe indictment against him. If the Almighty has endowed me with intelligence, good health, or good fortune, then to squander these gifts is to show contempt for the purpose for which they were given and the One who gave them. Ultimately, such negligence may result in the forfeiture of the blessings God has given me.

A person acquires a lowly spirit by adopting an attitude of scrupulous self-evaluation. He stands at every moment in awe of the Creator from whom he has benefitted and demands perfection from himself as if he were his own judge and jury. By cultivating such an attitude, the thought of failing to show appreciation for God's gifts becomes so repellent to him that continuously holds himself to the very highest standards of moral conduct and spiritual service.

A CREATURE OF CONTRADICTIONS

The Torah tells us that God created man from the dust of the earth, then animated his physical body with a divine soul, which the sages compare to a flame. The name adom, meaning "man," describes the physical dimension of man which was taken from the dust of the ground – the adomah – thereby emphasizing the animal nature that man shares with the beasts of the field. The name ish, which also means "man," shares its grammatical root with the word aish – meaning "fire" – and describes the soul that is the essence of man's spiritual nature.

But Rabbi Levitas uses a different word for man – enosh, an expression describing the coexistence of the spiritual and the physical in a single being. Unlike either the beasts of the field or the spiritual beings of the higher spheres that are what they are, man as an enosh – a creature of combined physicality and spirituality – defines himself as he chooses. In this ability lies both man's greatest potential and man's greatest vulnerability.

By recognizing that those qualities distinguishing him from the animals are divine gifts and obligate him to refine himself in the aspiration of spiritual ideals, man elevates himself to the level of true divinity. However, if he assumes that those qualities are merely part of his physical design, and that his physiological makeup is merely a product of random chance, then he sinks into physicality: rather than striving for spiritual greatness, man lowers his sights so that his goals, his dreams, and his hopes are entirely for worldly pleasures and indulgences.

This is Rabbi Levitas's warning: when a man – an enosh – fails to recognize the essence of his spiritual self, then all his hopes become directed toward goals that have no intrinsic value or enduring substance. Just as his physical body is destined for the grave, so too will all the hopes that define his life and his existence ultimately go to worms.

Therefore, teaches Rabbi Levitas, every one of us should strive to acquire an exceedingly lowly spirit, taking no credit for our abilities and holding ourselves accountable for the realization of our full potential. Whereas the refinement of most character traits requires balance between extremes, the destructive nature of arrogance allows for no compromise and demands that we distance ourselves from it to limit of our ability.

Humility is not something we are born with. It is an acquired outlook, one within reach of all of us. Indeed, through the acquisition of a lowly spirit, we acquire as well the confidence and conviction that will allow our spirits to soar.

Cheshvan: Turning the Bitter into Greatness
Chukat 5782: Let’s Play the Blame Game!
The Sin of Moses: The Two Ways to Communicate
In Aftermath of Chicago’s July 4th Shooting, Local Moms Provide Countless Points of Light
Comments
MOST POPULAR IN Spirituality
Our privacy policy