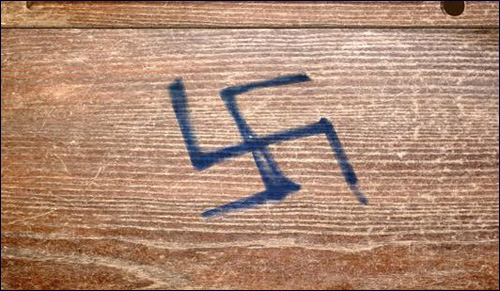 I was in the classroom when I saw it. I thought it was the usual inkblot souvenir left by the rambunctious teenagers at the Middle school where I teach, but there was nothing typical about it. Etched on the cream desk was a dark blue swastika, about the size of gumdrop and about as big as anything I had ever seen. Do these children even understand what their graffiti represents?

When I was a child, I watched a lot of TV. A lot. Before cable, before DVR’s, I would sit in front of our Sony television set with the rabbit ears and turn the dial until I found something to satiate my prepubescent curiosity. Instead of getting stuck watching bowling, one afternoon, when I was ten, I found myself glued to a movie called, Playing for Time. Many of the scenes, the imagery – still haunt me all these years later. I reluctantly watched over two hours’ worth of horror. Shocked at how a once beautiful, respectable lady, was now singing Opera music in a concentration camp, in exchange for her life. Her emaciated body and sprouts of red hair was a site to behold. In light of recent events of anti-Semitism, these images are in the forefront of my mind.

It was in that moment I knew that my life as a Jew was different than others.

What made this story particularly morose was it was the first publically broadcasted show that showed exactly what happened to the people who were ripped from their normal lives. One minute the ample sized women were in furs and silken scarves and quickly they were transformed emaciated, nearly bald waifs scrimmaging for bread.

The Gestapo had them strip and shaved, and through expert directing you felt as if you were truly in the camps with them. And it was in that moment I knew that my life as a Jew was different than others. That at any moment, I could be taken from my home and stripped of my dignity, my tresses. It was in this moment I saw the world differently.

Growing up in Brooklyn I did not always feel privileged, although I was. I went to public schools, took public transportation and was vulnerable. But I never thought that even though I was in America that the hatred for my people would evaporate. Yet I lived my life. When I traveled and left the comfort of New York I realized for the first time how much Jews were hated.

First, when I lived in Georgia, I came in contact with different beliefs. People I considered friends would openly say, “That’s too much, can I Jew you down?” When I told them that was offensive, they could not comprehend why.

My colleagues who were true southerners appeared to accept me, however one told me, “Elana I like you but I could never bring you home. My grandfather is in the Klan.”

Atlanta has a large Jewish population, but hateful groups were omnipresent. Eventually I left to travel, with a bittersweet after-taste of southern hospitality mixed with latent anti-Semitism.

My parents told me when I went abroad not to tell anyone I was Jewish, but that advice fell on deaf ears. When I met the ever-present German travelers, I mentioned my background within minutes, often leading to lively debates. For most, I was their first Jewish friend and they often bombarded me with questions, finally admitting that they never liked people “like me” before. When my trip overlapped with Rosh Hashanah I found the one temple in Quito, Ecuador and went for services. There were guards with large guns at every entrance surrounding the temple. Their presence both scared and eased me.

I didn’t think that Nazi’s could exist in a country of people of color, but I was wrong.

When I went to purchase a knapsack from an upcoming trip, the salesman had a small black swastika on his arm. I told him in my best Spanish that I could not buy anything from him. He could not understand. Did he even know what that tattoo meant?

As a child I took the crowded B68 bus that transferred passengers up and down Coney Island in Brooklyn, NY. I witnessed old women with gray hair and sleeveless dresses, with tattooed numbers etched on their arms, sometimes rubbing into them on the way to the back to get a seat. Picturing them in the camps, I wondered how they survived.

We think because we are Americans, we are safe. We’re not.

Radicals say the Holocaust never happened. Cynics say Jews are oversensitive, paranoid. Of course it will never happen again. But it did and it does in different forms of genocide all over the world. But we think because we are Americans, we are safe.

Anti-Semitic incidents on college campuses doubled in the past year.

Jewish residents of Whitefish, Montana are being targeted and harassed by followers of Alt-Right leader Richard Spencer.

Swastikas were drawn in the dormitory of The New School in NYC, in Adam Yauch Park in Brooklyn Heights and many other places.

Since the day I saw Playing for Time, I have thought that this horror could happen again. I’ve pledged to make a life where I help others, a teacher, a Peace Corps volunteer, an activist, and a writer. My voice will be heard.

I remain here in the city of my birth, in the nation of my trust. I spit on my hand, just as my mother used to, and with my fingers smudge the swastika off the school desk. It is not indelible; it can be removed but it can never go away. I returned this week to the classroom. Another swastika had been drawn.

Elana Rabinowitz is a writer and teacher living and working in Brooklyn, NY Follow her on twitter https://twitter.com/ElanaRabinowitz Her work can be found at http://elanarabinowitz.weebly.com/

The "Jewish Tribe" in Uganda