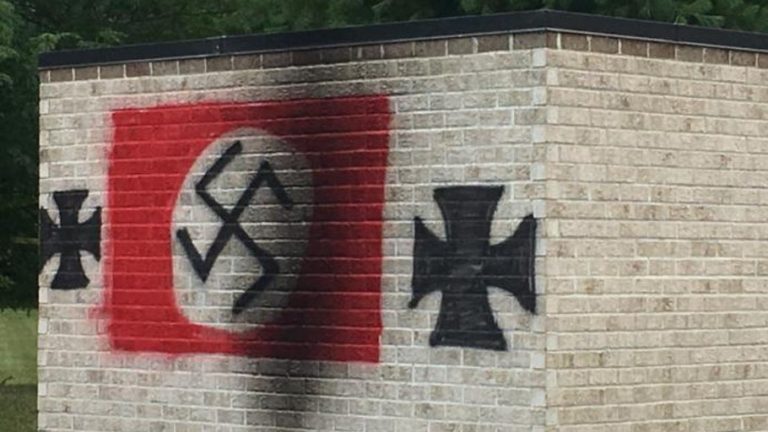 Indiana is experiencing an uptick in anti-Semitic incidents like the rest of the country.

The hateful image is shocking in its size and scope. A red and black swastika, flanked by black iron crosses, spray-painted on a storage shed in the back of Shaarey Tefillah, a synagogue in the peaceful Indianapolis suburb of Carmel. 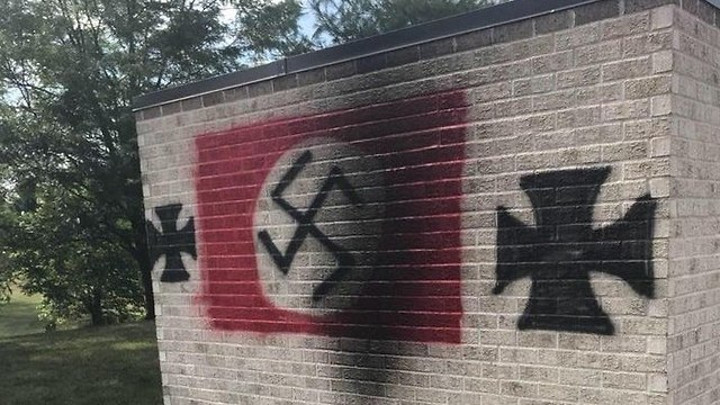 Vandals defaced the synagogue on Shabbat, over the night of July 27-28, 2018, spray painting from 11 pm until 2:20 am. Surveillance cameras captured the vandals’ work, though so far local police and the FBI have been unable to apprehend the suspects.

“This has been a pretty quiet community,” Debby Barton Grant, the CEO and Executive Vice President of the Jewish Federation of Greater Indianapolis and a member of the synagogue, explained in an Aish.com interview. “I think that was what was so disturbing about it for me.” As a community professional, Ms. Grant has seen her share of anti-Semitic vandalism, but never anything so meticulous as the swastika and crosses that defaced Shaarey Tefillah.

Congregants didn’t know about the spray paint until a neighbor in back of the synagogue noticed it and alerted the synagogue Shabbat afternoon. At first, congregants debated about whether they should quickly cover the offending images and erase them, or go public with the hate crime their synagogue had suffered.

Corey Freedman, Shaarey Tefillah’s president, explained to Aish.com that he and most community members favored going public with what had occurred. His in-laws survived the Holocaust and it was important for he and his wife Brenda to declare “Never Again” when it came to neo-Nazi hate.

After Shabbat, Debby Barton Grant posted pictures of the graffiti on her facebook page. “I posted it on my personal page because it felt personal.” She wrote: “I’m disgusted and furious tonight that this has happened and that my beautiful State of Indiana is one of only five states in the country that lacks a hate crime statute. There can be no equivocation when it comes to rejecting Nazism, white supremacy, and anti-Semitism. Such bigotry in all its forms is antithetical to the principles of freedom and equality that form the cornerstone of American democracy and our pluralistic society.”

Her post quickly went viral and messages of support poured into Carmel, Indiana from all over the world.

And so did some messages of hate. In addition to hundreds of positive messages of encouragement for the community, many commenters left hostile notes, in some cases seeming to defend the neo-Nazi graffiti or trying to justify it. For Ms. Grant, both types of comments reflect her experiences locally. While her community is generally tolerant and open, a recent Federation study found an increase in anti-Semitism in Indiana. “It’s certainly more than we thought,” she said. Children in local schools have reported hearing some anti-Semitic comments.

David Sklar, the Assistant Director of the Indianapolis Jewish Community Relations Council noted when speaking with Aish.com that the Anti-Defamation League recently recorded a 60% increase in anti-Semitic incidents in the United States. “Indiana is no different from anywhere else in the country. We’ve seen an uptick in anti-Semitic incidents in the past two years like the rest of the country.”

He points out that Shaarey Tefillah is not the only Indiana synagogue to experience hate recently. In March 2017, a gunman fired a bullet through the window of a synagogue in Evansville, Indiana, into a classroom. Luckily the building was empty at the time and nobody was hurt. “Swastikas have been drawn on biking trails around the Indianapolis area and ‘KKK’ was scrawled on a university in downtown Indianapolis. Other KKK and white supremacist leaflets have been distributed in central Indiana, left under windshield wipers on cars or in bags on residents’ porches.”

It’s not only the Jewish community that’s been targeted. In February 2016 an Islamic center in Plainfield, Indiana was vandalized with anti-Muslim slurs spray painted on the building’s walls and some Sikhs in Indiana have recently been the victims of hostile comments and even death threats. In these cases and more, David Sklar notes, the local Jewish community has stood by their neighbors, condemning hate. After the vandalism of Shaarey Tefillah synagogue, other faith groups are standing with local Jews in their hour of need.

On Monday, July 30, the small synagogue hosted over a thousand people at a special gathering in response to the vandalism in an outpouring of support. 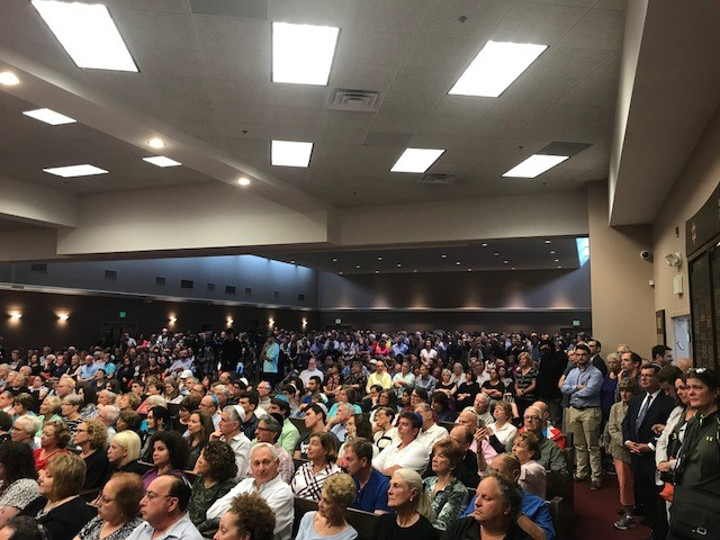 Over 1,000 people showed their support, cramming into the small synagogue.

Coming home from his synagogue’s community meeting at the end of the day, Corey Freedman was overwhelmed by the messages he’s received from all across the globe. The first thing he and his wife did after the meeting was look for photos of her parents, remembering their family’s connection to the Holocaust and the imperative they feel to make sure the lessons of the Holocaust are never forgotten. “We can never forget,” Corey explains. “It isn’t just a message for the Jews, it’s for all of us.”

Goodbye, Seri
Extras In Our Own Epic
Evolution 2.0: The Coming Darwinian Revolution
Chukat 5782: Let’s Play the Blame Game!
Comments
MOST POPULAR IN Israel
Our privacy policy