Menorah Twisted into a Swastika 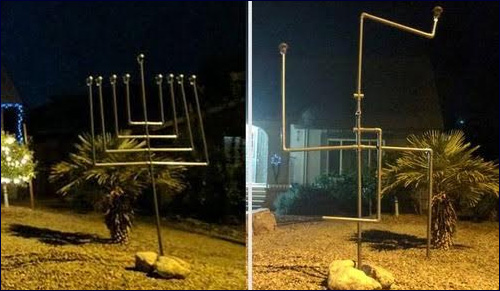 A family in Phoenix wakes up to find their 7-foot menorah turned into a swastika. The community fights back.

Naomi and Seth Ellis wanted to encourage their young sons to be excited about Chanukah.

“There are not so many Jews in our neighborhood,” Naomi explained in an Aish.com exclusive interview. Looking at all the holiday lights, Naomi’s boys, aged five, seven and nine, wanted to decorate their house with lights “like everyone else”.

Seth and Naomi’s solution: take their Jewish pride and their celebration of Chanukah outside. The couple perched a holiday Star of David on their roof and erected a large outdoor menorah outside their suburban home near Phoenix. The menorah was about seven feet tall, casting its warm light over the Ellis’ yard.

Lighting the menorah outside or next to a window serves to publicize the miracle. The Ellis’ menorah quickly did that, letting the whole community bask in the glow of its light.

“The kids loved it,” Naomi explained, “and the neighbors loved it too… there was lots of support.” The outdoor menorah was so successful, it became an annual tradition for the Ellis family and their community.

But that feeling of acceptance and security was sorely tested last week. On the sixth day of Chanukah, the family woke up to find their menorah had been brutally defaced, twisted into a swastika. 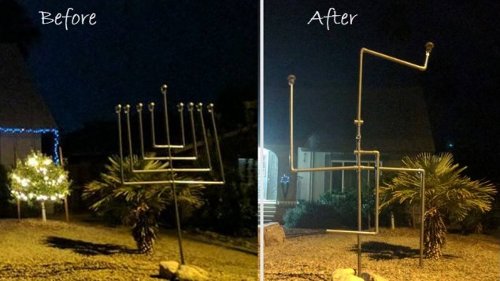 Seth was the first to see the swastika. He was rushing on his way to work, so he texted Naomi, advising her to call the police. “I woke up and looked out and freaked out,” Naomi recalls of the moment she saw the huge swastika outside her house. She burst into tears and called the police. While she waited for the police to arrive, she called her brother in Israel. “He was really supportive,” Naomi recalls. “He said you have to share what happened. You have to let people know.”

When the officers arrived, they helped Naomi take down the massive swastika. “I felt so shocked,” Naomi explained. On one hand, she recalls, she didn’t feel it could be anyone from her street, from her own welcoming community. “It’s hard to imagine it’s even someone from my neighborhood.”

Yet, Naomi notes, she doesn’t live on a major thoroughfare. It would be difficult for someone not familiar with their local streets to be aware of their menorah. Moreover, given the size of the menorah, it must have taken a considerable effort to twist and distort it into a swastika. “It definitely took some effort,” Naomi noted. “They weren’t just randomly doing it.”

“How can people be filled with so much hate and violence?” she posted on social media later that morning; “To think that someone would make such an effort to hurt and vandalize a family, is downright sickening”.

Naomi’s post quickly went viral, shared thousands of times and garnering thousands of comments. Shockingly, many of the these comments were hate-filled anti-Semitic rants. Mixed in with the many messages of support for the Ellises were posts from neo-Nazis and militant Islamists attacking Jews, posting anti-Semitic cartoons and filling her social media post with vile insults.

Instead of retreating into fear and passivity, Naomi resolved to push back against hate and prejudice. She shared pictures of the menorah on social media and asked if people had any information to contact the police. “Previously if I’d felt scared about erecting a menorah, I wouldn’t have put one up. But now we are resolved to keep displaying it. I can’t be a coward.”

When her sons woke up, Naomi showed them pictures of their menorah and tried to explain what had happened. “I told him how relighting the menorah is a symbol of Chanukah, that we have to relight and not let it get us down.”

Seth soon built another menorah, even bigger than the first: nine feet wide and ten feet tall, and Naomi invited their whole community to celebrate with her family as they lit the menorah for the seventh night of Chanukah.

The response was overwhelming. Yeshiva students from the local Chabad school came to be with the family Friday afternoon before Shabbat. Two rabbis from the Ellis’ local synagogue came along with some congregants. Neighbors walked over to be with the Ellises. Finally, at sundown, over a hundred people stood with the Ellises as they lit seven lights on their outdoor menorah. Together, the crowd recited blessings and sang Chanukah songs together.

Naomi calls the defacement of her family’s menorah a “call to action”. She sees it as a spur to “teach empathy and compassion.” “There are a few ignorant people out there but they’re not the greater number,” Naomi has learned.

For her children, she feels the lessons will come later, “as they learn about the Holocaust and the history of the Jewish people, they’ll be able to reflect on what happened to us” and see their own family’s experience with anti-Semitism and intolerance as part of the Jewish people’s as a whole.

The Ellis family looks forward to lighting their beautiful outdoor menorah next Chanukah, sharing the light and warmth of their Jewish heritage with their community once again.

Why are People Accusing Jews of Genocide?
The Softball Player
How This 6 Generation Bread Baker Brought Back Israel’s Ancient Grains
Olivia Newton John’s Grandfather was a Nobel-Prize Winning Jewish Physicist
Comments
MOST POPULAR IN Current Issues
Our privacy policy
Aish.com Is Looking for Great Writers