Two Sides to Every Desk: A Rosh Hashanah Parable 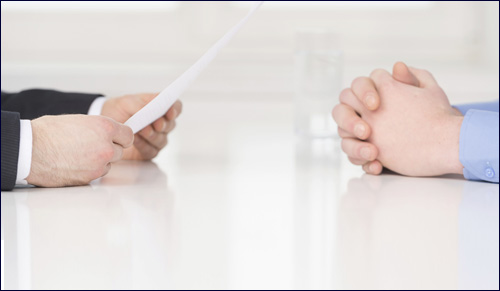 My boss summoned me into his office. He stood on one side of the desk and I stood on the other.

I stood in front of the large desk with my heart pounding. There was nothing I could say. A task was expected of me and I had not completed it. I was 29 and I was standing in my boss's office. For the past five days he had asked me to report to him about the project. Every day I had offered another excuse and his patience had finally worn thin. So there we were – him on one side of the desk and me on the other.

It suddenly struck me that I had previously felt this exact set of emotions when I stood in front of a different large desk sweating and ridden with anxiety. There was nothing I could say. A task was expected of me and I had not completed it. I was 10 years old and I was standing in the principal's office. My teacher had repeatedly asked me to hand in the overdue book report and every day I had another excuse, until my teacher finally had enough. So there we were – the principal on the other side of the desk and me on the other.

I once again steeled myself for the worst. I had not fulfilled my job commitment and that led to the frightening conclusion that I was about to lose my job. My employer swiveled his leather chair to face me. He waved his hand and pointed to the chair alongside the desk for me to sit. As I lowered myself into the chair I felt like a ten year old again, scared and alone with no one to turn to.

My boss suddenly walked around the desk to where I was sitting and grabbed a chair to sit down beside me.

My boss suddenly stood up, walked around the desk to where I was sitting, and grabbed a chair to sit down beside me. This was not what I was expecting. My level of discomfort rose.

“Do you know why I'm sitting here next to you?” he asked. “So that you know we are on the same team. I’m not here to scold you. I hired you because I believed in your ability and skills. As your employer it's my duty to ensure your success.”

As Jews approach Rosh Hashanah, the Day of Judgment, there is a palpable fear, like a trembling student standing in front of the principal or like an employee before his superior. Rabbi Yochanan offers a different approach (Rosh Hashanah 17b). He notes that the Torah verse that describes the 13 Attributes of Mercy that Jews recite to receive God’s forgiveness says, “God passed before him (Moses) and proclaimed…” (Exodus, 34:6), implying that God Himself will say call out the 13 attributes. Rabbi Yochanan said that this verse teaches us that God appeared before Moses wrapped in a tallit as if He was leading the chazzan leading the congregation in prayer. God was demonstrating that He is with us, on our team, advocating and leading us back to the fold. God sat on our side of the desk, as the Medrash says that on Rosh Hashanah God (figuratively) arises out of His seat of strict judgment and moves over to His seat of mercy.

When I received my boss’s reassurance I felt a huge weight lifted off my shoulders. But our conversation was not finished. I knew he was waiting to hear from me a detailed plan of action that would remedy my previous failure to fulfill my commitment. I assured him that I would submit that afternoon a step-by-step system that would allow me to accomplish my responsibilities.

In a similar vein, Rabbi Yochanan writes that when God introduced the 13 Attributes of Mercy to Moses, He told him, “Let the Jews perform the following service (of the thirteen attributes)...” Rabbi Yochanan didn’t write, “Let the Jews say the 13 attributes”, but rather, “perform them...” God wants us to emulate His ways, “As God is merciful, so too, you should be merciful.” The way to repair our relationship with God is to signal with our actions that although we have failed in the past, we are ready to get back to work. He wants our detailed plan of action that we are committed to fulfill on His desk, no later than Yom Kippur.

Shana tova, may you have a sweet new year.

Perfectly Imperfect: The Secret of the Shofar

Rosh Hashanah: What's Love Got to Do With It?
It Takes A Lot Of Faith To Be An Atheist
How Instagram Brought Back This Nostalgic Soup
What Makes Eli Run?
Comments
MOST POPULAR IN The High Holidays
Our privacy policy