The Jews of Djerba: 9 Facts about This Ancient Jewish Community 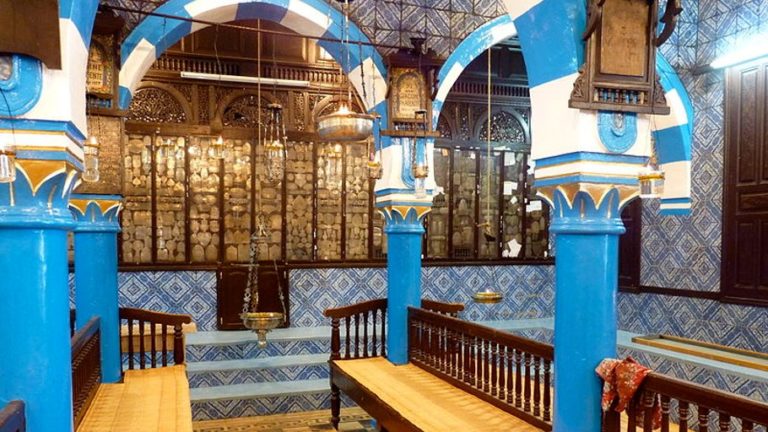 One of the oldest Jewish communities in the world exists in a Muslim-dominated region.

1. Djerba, an island off the coast of Tunisia, Africa, stands like a citadel among an ocean of unrest. Besides being home to one of the oldest Jewish communities in the world, Djerba is also one of the only Jewish communities living in a Muslim-dominated region. Locals work side-by-side and in relative harmony with their Muslim neighbors, speaking the local language of Arabic. 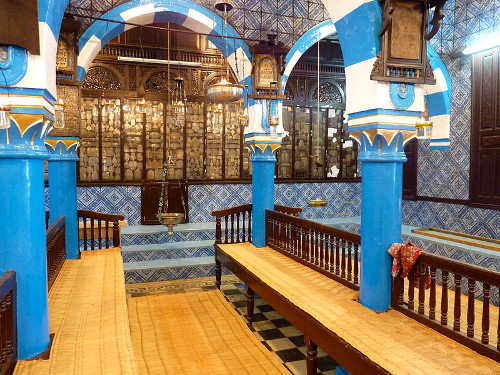 2. As equally fascinating as the age and locale of this 2,500-year community is the people’s ancestry. The unique community has been dubbed “The Island of Kohanim (priests)” since approximately 80% of the community is descended from priests, according to the biography From Djerba to Jerusalem. According to the book, following the destruction of the First Temple, the high priest Tzadok, along with his fellow Kohanim, escaped to this distant Island and settled there. Locals maintain that the priests carried a stone with them from the altar of the destroyed Temple, and incorporated it into the building of the famous synagogue, the El Ghriba synagogue. 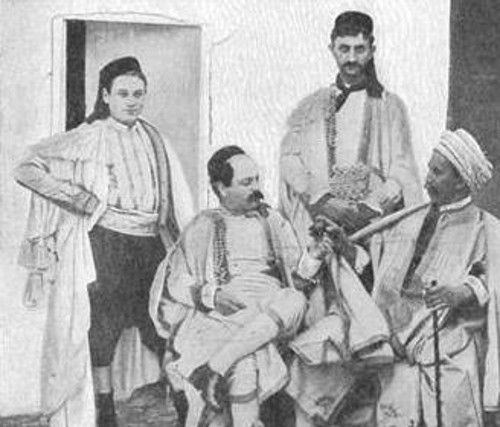 3. While there are a sprinkling of Israelites in Djerba (Jews who descend from tribes other than the tribe of Levi and its family of priests), the lack of Levites might seem puzzling. According to tradition, their absence is a result of their refusal to return to Israel after the Second Temple was built. Travel writer Ari Greenspan’s article The Jews of Djerba notes that when the prophet Ezra heard about their refusal to return, he cursed them and said that the Levites there would not live out the year.

4. The community, reminiscent of the shtetl-style life of yesteryear, remains a source of pride for the Djerban Jews. Most men contribute to the largely self-sufficient community by taking on blue-collar jobs, working as craftsmen, jewelry makers, storeowners, and vendors at the marketplace.

5. Locals of Djerba maintain scrupulous adherence to Jewish law and hold their 2,500-year-old customs sacred. Their kashrut customs, marriage practices, and education system remain virtually unchanged since it was established. 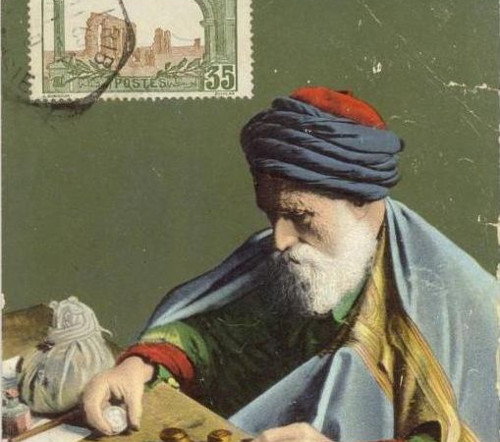 In his article, Rabbi Greenspan relates that community members still bring their pots and challot to the local baker on Friday afternoon to have them heated in a warm oven over the course of Shabbos – a custom no longer in place anywhere else in the world. (While their kitchens are modern enough to keep their food warm in their own homes, they continue to practice this custom in order to keep it alive.) Rabbi Biton, the community rabbi, can be seen on the rooftops every Friday afternoon blowing a ram's horn to remind everyone to close their shops before the approach of the Shabbos – another ancient custom still held sacred.

6. The El Ghriba synagogue, which literally translates as “the extraordinary one”, is one of the oldest-standing and most architecturally beautiful synagogues around today and attracts thousands of tourists every year. Tunisian Jews hope to gain a UNESCO World Heritage status for the building. 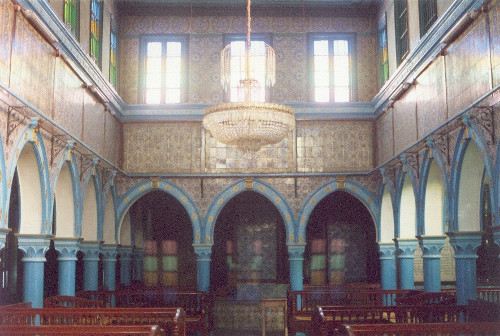 Inside the El Ghriba Synagogue By Chapultepec, CC BY-SA 3.0, https://commons.wikimedia.org/w/index.php?curid=1930877

The story behind how the synagogue got its name is a strange one. Locals of Djerba told Rabbi Greenspan that legend has it that a beautiful, pious woman who lived alone died as a result of a fire on the Jewish holiday of Lag BaOmer. Though her house burned, her body remained untouched by the flames and the community attributed this to her saintliness. The unknown woman, nicknamed “the extraordinary one”, was buried next to the synagogue. 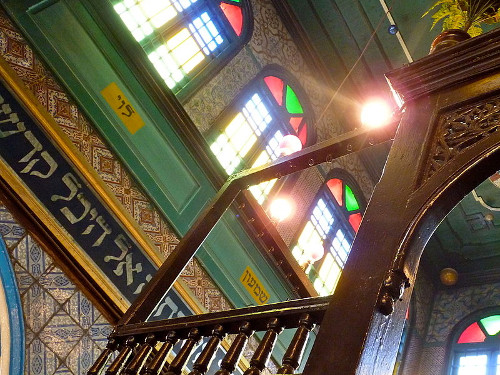 7. One unique custom and highlight of the year for Tunisian Jews is the yearly pilgrimage to Djerba. During the time of Lag BaOmer, thousands of Jews make a pilgrimage to pray at the El Ghriba synagogue in honor of Rabbi Meir Baal Haness and Rabbi Shimon Bar Yochai, two great sages who died during that time of year. A festive parade is made in their honor, where a giant cloth-decorated candelabra mounted on three wheels is marched through the streets while the attendees sing in honor of the sages. The menorah is beautifully decorated with representations of the 12 tribes of Israel, the names of rabbis of Tunisia, the names of the Patriarchs and Matriarchs, and crowned with a star of David containing an inscription of the Divine name. According to Beit Hatfutsot, the Diaspora Museum in Tel Aviv, the menorah, decorated in veils, is made to resemble a bride and the parade is made to resemble a wedding ceremony, signifying the union between the people of Israel and God. Pilgrims also pay homage to the gravesite of the woman buried next to the synagogue. Visiting her grave has become auspicious for helping barren women bear children. 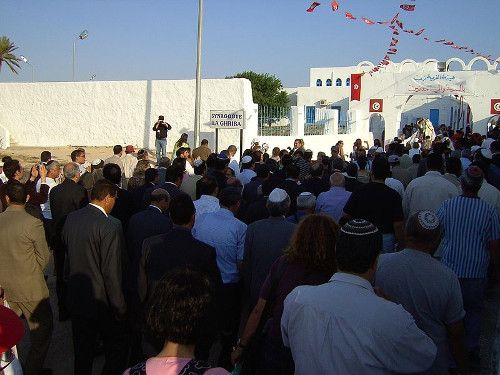 8. Despite the relative communal harmony, it is not completely immune to anti-Semitism. In 1985, a local policeman responsible for watching the synagogue opened fire, killing three people, among them one child. In 2002, a truck belonging to a suicide bomber affiliated with Al Qaida exploded near the shul and killed 21 people, mostly German tourists. In January 2018, a firebomb was thrown at the synagogue in an attempt to burn it down. Fortunately, it only caused minor damages.

9. The age-old community faces an uncertain future. What was once populated by 100,000 individuals is down to a few families consisting of one thousand people. Most of the Jews have emigrated to France and Israel. The terror attack in 2002, growing social unrest, and religious extremism in the region has made tourists wary of visiting, effectively hurting the income of many locals who rely on tourists to buy their products. According to Haaretz, while some are weighing the idea of traveling en masse to Israel, they have mixed feelings about abandoning such a rich heritage behind. “Everybody’s thought about leaving,” says local resident Ben Zion Dee’ie. “It feels wrong to leave where my ancestors lived for so many years.”

Who Are the Jews?: A Psychologist’s Response
Morality and Abortion: Three Views
There Are No Limits
Adam and Eve Were Vegan
Comments