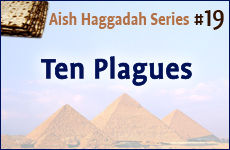 How does modern man understand plagues and miracles?

These are the Ten Plagues that the Holy One, blessed be He, brought upon the Egyptians in Egypt: blood, frogs, lice, wild beasts, pestilence, boils, hail, locusts, darkness, slaying of the first born.

We have to deal with this idea of miracles, because the modern, scientific mind says, "Come on, what do you mean miracles?"

If you would say to people that there is enough energy in a little bomb to blow up an entire city, they'd say you're crazy – how could there possibly be so much energy in that little thing? The fact is, the energy holding bonding elements and atoms together is immense, and when you release that bonding, nuclear fission produces tremendous energy. This law of physics always existed. It just wasn't until the 20th century that we understood how to unlock that energy. That's law of nature.

But nature can be superceded by miracles. "Miracle" means there is a spiritual level where nature can be overridden. The Kabbalah gives instructions for how to do that. It's very "scientific" because kabbalah also operates according to laws. That was the key to Moses' ability to lead the Jews through the plagues and the splitting of the sea.

Through the Ten Plagues, the Egyptians and the Jews were forced to realize that all of nature has another level to it – a spiritual level. Everyone came to understand that God runs everything and all of it can change. The plagues touched every aspect of the physical world, starting with the lowest forms and working higher.

The plague of blood affected "water." The next plague was frogs – creatures who live in the water then come onto dry land. Then lice infested the dirt. Then came wild animals – a higher form of species. Then pestilence hit the cattle. The next plague already affected human beings – boils appeared on their skin. Hail is higher still – coming from the sky. Locusts are animals of the sky. Then darkness affects the basis of life – light and dark. Finally, the killing of the first born took the soul.

But there's one higher level still. Eventually the Egyptians chased the Jews and the Red Sea split. There you see that not only does God run everything, but nature itself responds to good and evil. God split the sea for the "soul" – the Jewish people, but it swallowed up the "body" – the Egyptians.

Family Fun with the Plagues

Since the idea of the Seder is to get children interested and involved, the Ten Plagues is a good opportunity to add an experiential, dramatic element to the evening. Plan ahead with some props and you'll see how much fun the Seder can be – for children and adults alike.

Here are some suggestions for the Ten Plagues:

1) BLOOD – Prepare a large, clear pitcher – empty except for some red food coloring inconspicuously at the bottom. At the appropriate moment, pour in some water – and watch the water magically turn to "blood!" (One technical point: Don't do the opposite and pour the food coloring into the water, as that would be a problem of "coloring" which is forbidden on Jewish holidays.) And if you're really brave, drink a little of the water, to re-enact the Midrash which says that even during the plague of blood, the Jews could still drink and have it taste like "water!"

2) FROGS – Have everyone get out of their chairs and hop around the room, croaking like frogs. It's a good opportunity to stretch before the next part of the Seder.

3) LICE – Go to your local toy store and buy a bunch of plastic bugs. At the appropriate moment, toss them onto the lap of the person next to you.

4) WILD ANIMALS – My personal favorite. Toy stores are filled with all kinds of plastic lions, snakes, elephants and bears. Plus you can put on a tiger mask or even a full gorilla costume to really get everyone in the spirit.

5) PESTILENCE – This is the plague where all the animals died of disease. If you can impersonate a dead animal, go right ahead...

6) BOILS – The Egyptians were covered with open sores which caused them unbearable itching! Have everyone at your Seder table break out into an uncontrollable fit of itching.

7) HAIL – Cotton balls work best for this. A few minutes of steady rain should do the trick. If you're more adventurous, try ping pong balls instead.

8) LOCUSTS – What do grasshoppers do? They hop. It's good exercise before the festive meal.

9) DARKNESS – Since the laws of Yom Tov forbid the use of electricity, don't turn off your lights. I know somebody once who tried to be very clever and put his lights on a "timer," set to go off during the plague of darkness. He misjudged, and they wound up eating most of the meal in the dark. A better alternative is to have everyone put on a blindfold and try walking around the room for two minutes!

10) FIRST BORN – We don't recommend you try this at home. We certainly would have preferred that the Egyptians would have acknowledged God's sovereignty, and been spared this terrible punishment.

The point here is to be creative. Give each child a brown paper bag filled with props. Have fun!

In the book of Exodus, the Torah reports that the Egyptian court magicians were able to duplicate the first two plagues. For this reason Pharaoh was convinced that he was facing a force with which he could at least contend.

However, the great philosopher, grammarian, and biblical commentator Rabbi Avraham Ibn Ezra (1089-1164) explains that a close reading of the text reveals that in truth the Egyptian magicians were no match for Moses and his brother Aaron. In fact, the best the Egyptians could do was to turn a small bottle of water into blood. They certainly couldn't transform the mighty Nile into a bloody waterway. Yet despite these feeble attempts to duplicate the plagues, Pharaoh continued to cling to his conviction not to free the Jews – despite Moses' warning of even more dire consequences.

There is a little bit of Pharaoh in us all.

Life is a battle. We all want to do what is right and good. But it's such a struggle. And when locked in this pitched battle, we often give in to our impulse towards rationalization. Rationalization affords us a respite, as it enables us to justify actions which deep down we know are not for us.

This remarkable ability, when viewed from a distance, would often be laughable if it weren't so destructive. Like Pharaoh and his magicians, clinging to straws, we seek to excuse some actions and justify others, while hurtling unchecked towards our own self-destruction.

Sometimes the pattern is like this: You consider a course of action, carefully weigh all the options and permutations, and finally arrive at a conclusion. Your decision has been made and you're off and running. At first the going is smooth, but soon you find that you keep stubbing a toe. Then you twist an ankle, injure a knee, throw out your back, and eventually run face-first into a brick wall which everyone saw but you.

Dazed and bruised, you ponder a most ancient riddle: "Where did that come from?" The answer may well lie in the fact that the only thing harder than admitting you've made a mistake is running headlong into the consequences. Such was Pharaoh... and such is life.

To admit that the sum total of all our careful calculations and detailed planning is nothing more than a brilliantly charted course to failure is simply too much to bear. Our egos just won't allow us to hear of such nonsense. So we don a pair of designer blinders sporting the Pharaoh logo and rush off into the grasp of everything we wanted to avoid.

Or, unlike Pharaoh, we can refuse to shut our eyes – and have the courage to sacrifice our egos, before we sacrifice ourselves.

All Who Are Hungry