Family Fun with the Ten Plagues 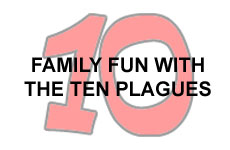 Add an experiential, dramatic element to the evening.

Since the idea of the Seder is to get children interested and involved, the Ten Plagues is a good opportunity to add an experiential, dramatic element to the evening. Plan ahead with some props and you'll see how much fun the Seder can be -- for children and adults alike.

Here are some suggestions for the Ten Plagues:

1) BLOOD -- Prepare a large, clear pitcher -- empty except for some red food coloring inconspicuously at the bottom. At the appropriate moment, pour in some water -- and watch the water magically turn to "blood!" (One technical point: Don't do the opposite and pour the food coloring into the water, as that would be a problem of "coloring" which is forbidden on Jewish holidays.) And if you're really brave, drink a little of the water, to re-enact the Midrash which says that even during the plague of blood, the Jews could still drink and have it taste like "water!"

2) FROGS -- Have everyone get out of their chairs and hop around the room, croaking like frogs. It's a good opportunity to stretch before the next part of the Seder.

3) LICE -- Go to your local toy store and buy a bunch of plastic bugs. At the appropriate moment, toss them onto the lap of the person next to you. Oriental Trading Company is a good source for plastic insects, and for other animal-based plagues!

4) WILD ANIMALS -- My personal favorite. Toy stores are filled with all kinds of plastic lions, snakes, elephants and bears. Plus you can put on a tiger mask or even a full gorilla costume to really get everyone in the spirit.

5) PESTILENCE -- This is the plague where all the animals died of disease. If you can impersonate a dead animal, go right ahead...

6) BOILS -- The Egyptians were covered with open sores which caused them unbearable itching! Have everyone at your Seder table break out into an uncontrollable fit of itching.

7) HAIL -- - Marshmallows (kosher for Passover!) work best for this. Foam balls and cotton balls work, too. If you're more adventurous, use ping-pong balls.

8) LOCUSTS -- What do grasshoppers do? They hop. It's good exercise before the festive meal.

9) DARKNESS -- Since the laws of Yom Tov forbid the use of electricity, don't turn off your lights. I know somebody once who tried to be very clever and put his lights on a "timer," set to go off during the plague of darkness. He misjudged, and they wound up eating most of the meal in the dark. A better alternative is to have everyone put on a blindfold and try walking around the room for two minutes!

Another idea: The Midrash says that during the plague of darkness in Egypt, the Jews searched the Egyptians' homes for valuables, which they were later given as “payment” for the many years of hard labor. So try hiding costume jewelry around the room, and turn it into a treasure hunt.

10) FIRST BORN -- We don't recommend you try this at home. We certainly would have preferred that the Egyptians would have acknowledged God's sovereignty, and been spared this terrible punishment.

Another idea: Buy an aqua-colored mylar "curtain" from a party store, and have everyone pass through the splitting of the sea, decorated with a sign that says: "You are now leaving Egypt."

The point here is to be creative. Give each child a brown paper bag filled with props. Have fun!