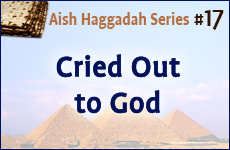 We cried out to God. He heard our voice and saw our affliction.

The King of Egypt Died

"We cried to the Lord, God of our ancestors." As it says: "After some time, the king of Egypt died, and the Jewish people moaned because of the bondage, and they cried. And their cry for help from the slavery rose up to God." (Exodus 2:23)

The Haggadah says: "After some time, the king of Egypt died..." There are various commentaries on what this means. One understanding is that the king actually died. The Jews hoped that things would then get better. Instead, things got worse.

A second understanding is that the king didn't actually die. The Talmud says that several things make a person regarded as "dead." One of them is leprosy. It's a terrible disease and nobody wants to associate with you. Pharaoh got leprosy. He was like a dead man.

So why did Pharaoh's leprosy make the Jews "cry out to God"? Because Pharaoh's doctor said that the cure was to bathe in Jewish blood. When the Jews saw that, there was nothing left to hold onto. Finally every Jew – observant and assimilated – both said, "I am a Jew," and turned back to God.

Under pressure, the Jew will turn back.

"And God heard our voice." As it says: "God heard their groaning and recalled His covenant with Abraham, Isaac and Jacob." (Exodus 2:24)

The Jews turns to God, and God turns toward us. And when that happens, history can change. Like the blink of an eye. If you had spoken to anybody 100 years ago, they would have said, "Come on, Jews living Israel and speaking Hebrew? Impossible!"

If we turn back, God responds. Immediately. He is always ready to receive.

We cried out to the Lord, God of our ancestors. And God heard our voice and saw our affliction and our toil and our oppression. (Deut. 26:7)

Harold is walking down a darkened alley, when he's suddenly confronted by two masked men carrying guns. Fearing for his life, Harold throws his hands heavenward and begins to pray, "God, save me, please save me! I'll do anything, God – I'll go to synagogue every day, give half my income to charity, and I'll even stop dating Christine!"

Just at that moment, a police car pulls into the alley, and the thugs flee. Harold looks heavenward and says, "Never mind, God, I took care of it myself!"

In times of crisis, everyone knows Who to turn to. As the saying goes, "there is no atheist in a foxhole."

And God wants it that way. He may purposely bring us to the point of desperation, in order that we should realize that – after having exhausted every other option – it is God alone Who is able to save us. That way, when redemption does occur, we will not make the common mistake of ascribing it to "good luck" or "our own clever solution."

For the Jews in Egypt, who were on the brink of forging the eternal nation, it was critical that they be redeemed with full cognizance of God's guiding hand. That is why, says the Haggadah, it wasn't until "We cried out to God, that He heard our voice and saw our affliction." At that moment, redemption was under way.

"And God heard our voice." As it says: "God heard their groaning and recalled His covenant with Abraham, Isaac and Jacob." (Exodus 2:24)

The Talmud (Shabbat 55a) says that God's covenant with the Jewish people is eternal. It cannot be revoked, even if the recipient is no longer deserving.

It is a phenomenon of world history that the Jews have survived. Other great civilizations – the Greeks, Persians, Babylonians and Romans have faded to an archaeological relic. The Jewish people, meanwhile, thrive and flourish despite endless persecutions and hardships.

The story is told of King Louis XIV asking the philosopher Pascal for some proof of a supernatural force in the world. "Why, the Jews, your majesty," Pascal answered. "The Jews."

"And He saw our affliction." This refers to the cessation of family life, as it says: "God looked upon the Jewish people, and God took note."

For the Jews, the real tragedy of slavery was not the long work hours or wasted years. The real tragedy was the terrible affect that slavery had on family life. It was disrupted, perverted and crushed.

How unfortunate it is today that so few consider their family a major concern. For most, business is the number one priority. Do we worry and seek advice on a family problem in the same way we do for business? Or are we scrupulous with our money and indifferent to our family?

Let's consider our priorities carefully. For after all, isn't that the essence of freedom?

Breakdown of the Unit

"And He saw our affliction." This refers to the cessation of family life, as it says: "God looked upon the Jewish people, and God took note."

The Haggadah emphasizes that a main hardship of slavery was the "disruption of family life."

In the 21st century, divorce and adultery have become so commonplace that we don't regard it as much of a problem anymore. But in reality, it is this breakdown of the family unit that causes the most pain to individuals, and the most instability in society as a whole.

Human beings need the security of knowing that their spouse is faithful, and that a marital commitment – except in extenuating circumstances – is forever. Family life is more than just a convenient way to share household chores and utility bills. Family life is the source of our understanding for how to build relationships with other people, and by extension, to reach out and connect with the Almighty God.