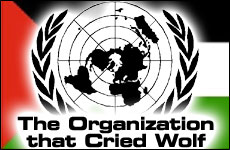 The UN has lost all credibility and many real victims now suffer.

The UN has lost all credibility and many real victims now suffer.

Most are familiar with the famous child’s tale about the boy who cried wolf. On too many occasions he would claim that he was being endangered by a wolf and fool the well-meaning village folks who came running to his aid. They would be met with the boy giggling at their gullibility. Alas, when his life was really in jeopardy by a wolf and he cried out for help, none came to assist him. He had totally destroyed his credibility and the good-will of his neighbors by his repeated lies.

Today we are witnessing a tragic expression of this lesson on a global scale. And what makes is all the more distressing is that the victims generally are not the perpetrators of the lie; they do not deserve the punishment, as the boy in the fable did.

For too long the United Nations and their many enablers such as Arab nations, the media, European leftist and university professors have thrust the Palestinian case to be the cause célèbre on the international scene. And this is having very serious repercussions for millions of people who suffer all over the world. As Robert Fulford from the National Post (Canada) so eloquently wrote recently in an essay entitled, “Frozen in Time, Addicted to Pity” about the sham of Palestinian refugee status:

Refugees? Canadians (and Americans) know something about refugees. We know Hungarians, we know Vietnamese, we know many others. We admire their energy and their accomplishments. Observing them can be a bracing lesson in human tenacity under adverse circumstances.

But that pattern doesn't cover Palestinian refugees. They are a special case. For many reasons, various populations across the planet are displaced; only the Palestinians cling to their "refugee" status decade after decade. They present themselves as helpless victims of Israeli aggression. They await rescue - as they have been awaiting it for three generations, since Israel was founded in 1948. Members of other history-battered groups choose to live by an urgent ethic: Get up, get going, make a new life. Palestinians have a different approach: Sit down, wait, stay angry till the world provides for you.

The Palestinians are the only people who have their own private section of the UN, the United Nations Relief and Works Agency (UNRWA). It defines "refugee" as someone who lived in Palestine between June, 1946, and May, 1948, and "lost both their homes and means of livelihood as a result of the 1948 Arab-Israeli conflict." The definition includes all their descendants. Entirely credible numbers don't exist, but UNRWA believes there were 711,000 such refugees in 1948, and now more than 4.7 million.

Sol Stern, trying in a recent City Journal article to bring some perspective to the Palestinian question, noted that in 1945 about 11 million ethnic German civilians, living in Central and Eastern Europe, were expelled from their homes "and force-marched to Germany by the Red Army, with help from the Czech and Polish governments. Historians estimate that two million died on the way." The survivors built new lives as best they could. Some still speak of reparations they deserve. None argue that they should live in squalor until they receive justice. The enemies of Israel have taught the world to pity the Palestinians and grant them an almost sacred position among the victims of colonialism. They deserve pity, of course, but pity for what their fellow Arabs have done to them.

The UN has launched an appeal for $459 million to help victims of Pakistan's flood disaster, which has affected at least 14 million people. UN humanitarian chief John Holmes said the money would be for immediate relief over the next three months. The disaster was "one of the most challenging that any country has faced in recent years", he said in New York.

But Mr. Holmes faces a daunting problem: People just don’t care. There is a general indifference to world suffering and a major part of the problem is the very organization that Mr. Holmes works for, the United Nations itself. It has spent so much time, energy, effort and dollars in its demonization of Israel for the so-called Palestinian crises that many real crises taking place in the world do not get the attention they deserve or need.

Pakistanis, Haitians, Chinese and so many others suffer and receive so little because the world has become numb to human suffering from the lies, deception and false claims that the United Nations has told about Israel regarding the Palestinians. If only the millions who are in great need (as we have seen in this past week alone) would be able to garner the widespread attention that the nine Turkish deaths received in the flotilla charade that captured world attention relentlessly in recent months, and still does. Making this all the more pitiful is the fact that the Haitians, Pakistanis et al suffer through no fault of their own, unlike the Palestinians who could have changed their situation if they so chose.

It is heartbreaking that so many lives will continue in wretched suffering and be ignored because the organization that is supposed to speak for them has completely lost all credibility through its continual claim about a crisis that doesn't exist nor did not have to be. And now when real calamity takes place, its voice falls on deaf ears, ignored from all the years it cried wolf, in the name of Palestine, when none existed.

The Next Solar Eclipse in 2024: A Startling Message for the World

My Experience in India