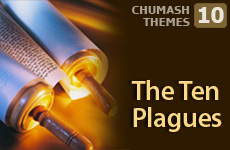 Unique lessons for Egyptians and Jews. 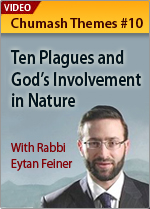 The Ten Plagues are perhaps the most recognizable facet of the Exodus. Why plagues? The simple understanding is that they were necessary to convince the Egyptians to free the Jews. However, if that was the only purpose, then one overwhelming calamity should have been enough. Therefore, there is obviously a lesson to be learned from the progression of the plagues. And this lesson has a double message, both for the Egyptians, and for the Jews as observers.

Bringing Monotheism to the World

In order to answer these questions we need to clarify the belief system of the world at that time.

Monotheistic morality was introduced to the world by Abraham and his descendants. Abraham tried to disseminate this concept to the world, but during this period civilization was awash with idols – with Egypt at the center. Thus when the Jews descended into Egyptian exile, they were enveloped by this idolatrous culture.

In an idolatrous world, each force of nature has its own god, and each god is a separate disparate force. The gods quarrel and fight, and man is abandoned to the caprices and jealousies of these petty figures. Therefore there is no sense of justice or mercy, since each god has its own agenda. The idea of a monotheistic God controlling all the forces of nature, while at the same time balancing and treating man with justice and mercy, had not gained currency in Egyptian society.

The lesson for the Egyptians was to know God. The Bible repeats five times that the plagues are being done “in order” that the Egyptians should know that God is Master of the entire world.1

Lesson for the Jews

On the other hand the prophet Isaiah says, “God smote the Egyptians, a plague and a cure.”2 In other words, the plagues were a punishment for the Egyptians, but for the Jews they were a cure. For what spiritual malady did the Jews need a cure?

This disease was assimilation. This was not cultural assimilation, but the slow disconnection from the ideals of Abraham. The Jews at the time, even though they had remained a distinct nationality (i.e. they had not intermarried with the Egyptians), they had nevertheless begun to worship Egyptian idols. To correct this, it was not sufficient to demonstrate God’s mastery in a general sense, but it needed to be detailed and specific. The Ten Plagues, in their orderly progression, show God’s power over all aspects of nature.

But why do we need ten, and specifically these ten plagues, to cure the Jewish people from their practice of idolatry?

From Creation to Revelation

The Talmud3 teaches us of a series of ‘tens’:

In kabbalistic thought, the number ten is represented by the Ten Sefirot.4 These are the then emanations of God’s presence in this world. The Talmud5 expands on this idea.

Why was the world created with ten utterances rather than one? In order to punish transgressors and reward the righteous.

What is the connection between the number of utterances, and reward and punishment?

If God would have created the world with one utterance, then His connection to the world would have been so direct and clear that there would be no space for our free will. In a world so directly connected to God, there is no space to choose. Since the purpose of creation is to allow man to choose to serve God, there needs to be veils that shroud His presence, and allow a person the option of choosing to believe in God, or not.

Therefore, instead of “direct creation,” there is a series of ten emanations that create a distance and mask the presence of God. Just as the distance from Earth to the sun is balanced exactly between the warmth needed to sustain life, but far enough that we are not incinerated, so too is God’s presence balanced in the world. God is close enough to be found by those who seek, but veiled enough so that those who choose to can ignore Him.

It is axiomatic that a person’s actions are not just personal, but impact the entire balance of the world.6 Positive actions reveal more of God’s presence, and negative ones conceal it. When the ten generations from Adam till Noah sinned, the balance between God’s “revelation” and “distance” was irrevocably damaged. Even if one would try, the path to revelation of God’s presence was blocked. Therefore, a new start was needed: the great Flood erased the past, to recreate the balance anew.

After the Flood, Noah began to rebuild the world. However, the ten generations from Noah to Abraham again failed, causing the same lack of equilibrium. In actuality, the world then should have gone through another cycle of destruction and rebuilding. But instead, Abraham, through his spiritual clarity and determination, was able to rebalance the world. Further, Abraham began the process of creating a stable core of humanity – the Jewish people – whose national mission would be to always see the hand of God.

When the Jews descended into Egypt and began to worship idols, the process of imbalance resumed. That special cadre was beginning to lose their mission. To reconnect the Jewish people back to God called for a revelation of how the physical world mirrors God’s Ten Utterances of creation. The Ten Plagues revealed this truth, and succeeded in bringing the Jews to a rediscovery of these ideas.

The Ten Forces of Nature

To fully understand this, let’s examine the correlation between the Ten Utterances of creation and the Ten Plagues. The order between the plagues and creation is inverse: Since creation went from the closest connection to God to the most distant, the plagues had to go in the opposite direction to reconnect us back.

To show the exact correlation between all ten is beyond the reach of this article.7 Here are a few examples: 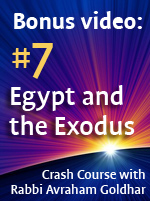 Therefore, the plagues were not only to punish the Egyptians, but to clarify to the entire world – especially to the Jewish people – the connection between God and His world. Indeed, that remains our challenge even today, every year when we sit with our family at the Seder, and even every day: to use the manifestation of God’s hand through history and nature to peel back the layers of concealment and gain awareness of God.

Chumash Themes #18: Sin of the Spies