Superman vs. the Nazis: How Comics Influenced American Public Opinion 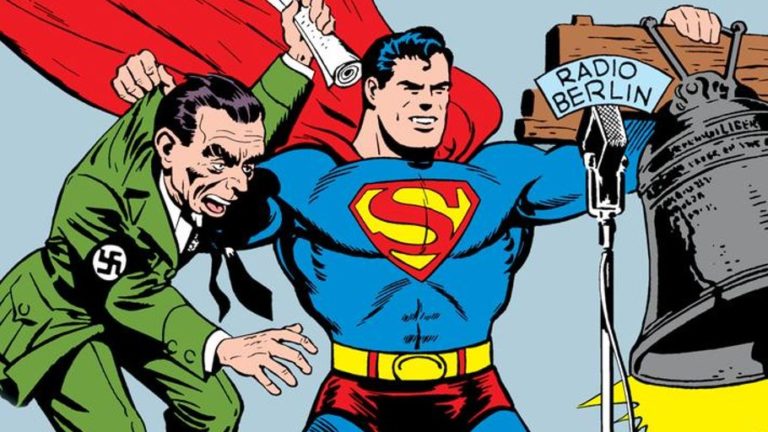 According to Gerald Hartman, Jewish American artists used their comic books to urge America to join World War II to save their brethren in Europe. 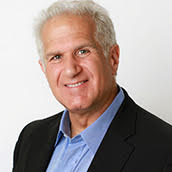 Throughout history there have been Jews who have been auspiciously placed in the right place at the right time to represent their people. In the Purim story for example, Mordechai instructs Esther to advocate on behalf of her people and famously remarks, “Who knows but that you have come to the kingdom for such a time as this?" According to Gerald Hartman, a renowned expert and collector of World War II era comic books, the mainly Jewish inventors of the comic book industry also found themselves in the right place at the right time, in this case, to advocate for the United States joining the war effort and save their brethren in Europe.

“The comic book industry was really created by Jews,” says Hartman, “because they couldn’t get jobs in certain industries such as advertising or illustration art due to antisemitism. As a result, they came up with their own medium that really appealed to the masses.” Hartman argues that there a number of Jewish ideas that are expressed in these early comics. “Truth, justice and the American way is really a Jewish ideal. This is another way of expressing Torah, avodah and gemilut chassadim – Torah, service and acts of loving kindness.”

Captain America was actually Jewish, says Hartman. Even though he was technically Irish, “He’s a Jewish guy. He’s bookish, nerdy, a 98-pound weakling born in the lower east side of New York. But then he becomes this super soldier who is able to take on the Nazis singlehandedly on behalf of American Jewry.”

Once World War II began, the Jewish creators of the comic book industry suddenly found themselves with a burning desire to help their coreligionists suffering in Europe and a medium that allowed them to influence public opinion. “Comic book artists thought it was important to get America to join the war so they tried to shift public opinion,” says Hartman. “They changed the bad guy nemesis of their comic superheroes to axis spies and the population starts to believe that there’s a Nazi spy around every corner and that America should align with the allies. The Jewish American artists wanted to accelerate the process and save their brethren.”

After Pearl Harbor, when the Americans were compelled to join the war effort, the American government co-opted this powerful propaganda tool to ensure that American public opinion was behind the significant effort that was ahead. “The Nazis were very good at propaganda,” says Hartman, “and the American government needed to counteract that. They needed anti-propaganda. One comic cover that reflects this is when Superman is abusing the Nazi propagandist Joseph Goebbels and Radio Berlin. 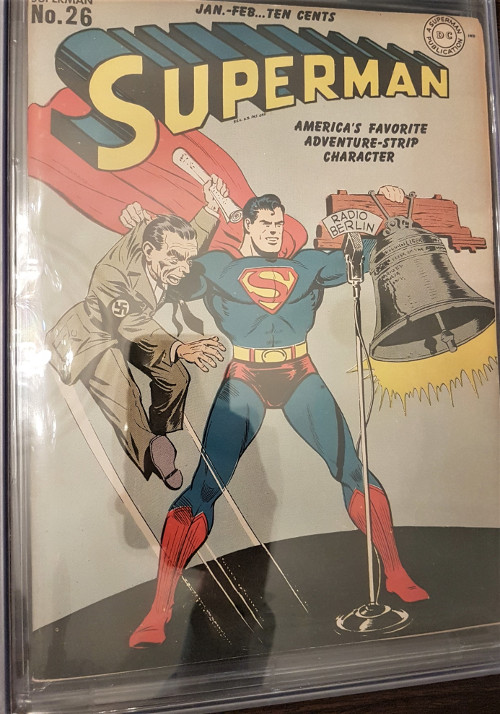 As the war continues, Hitler not surprisingly commands a significant amount of focus. “Hitler becomes mythologized,” says Hartman. “He’s a larger than life figure. He graces more than 100 comic book covers during the war.” Like this Captain America cover for example: 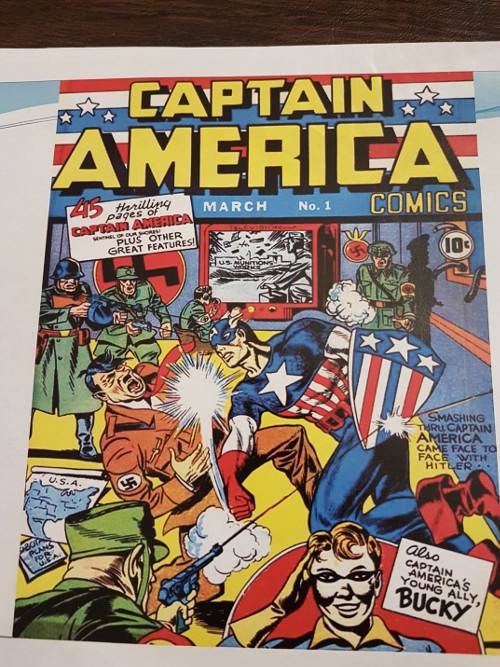 When the atrocities of the camps were starting to come to light, the comic book writers didn’t ignore it. Instead, they dealt with it in their own way. “During the war, there is one comic that shows a concentration camp massacre,” says Hartman. “It’s referred to as the Holocaust cover. There are civilians wearing identification tags and they were being marched into ovens. This is the only example of a mainstream comic addressing the issue during the war.” 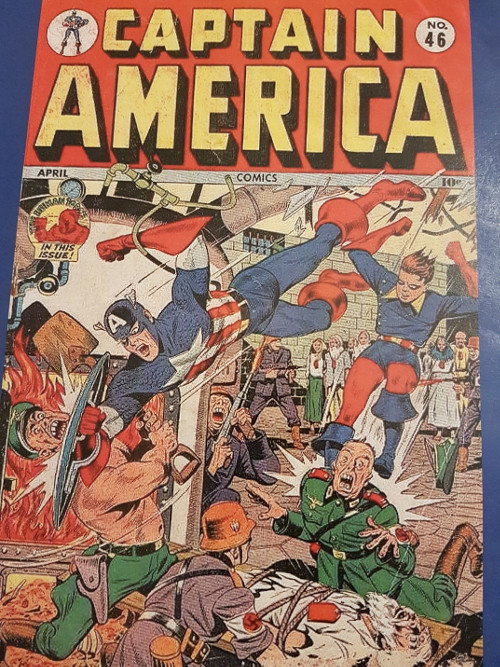 With the help of historical hindsight can we assess whether the comic book industry effort was helpful? “These Jews did what they could in the only way they knew how,” reflects Hartman. “In many cases they were teenagers and they were putting themselves at risk by depicting this message. That’s because before Pearl Harbor there were many American who were fascists and these people targeted Jewish artists and publishers. So they fought the war in their way.”

In his own way, Gerald Hartman also benefited from being in the right place at the right time. He went on March of the Living to honor the memory of his father who was a concentration camp survivor whose first wife and children were all killed in Auschwitz. It was on this trip that he met the woman who was soon to become his wife. “I believe that meeting Sheryl on the March was a gift that I was given that in some respects helped ease the pain and loss that my father suffered,” says Gerald.

They were both individually involved in the Jewish community, and now together as a unit they are a force to be reckoned with. “There’s not a month that goes by that we don’t host an event for a Jewish organization in our home,” says Sheryl.

Sheryl was the motivating force behind Gerald’s more recent forays into discussing his comic book passion publically. “When he told me about his collection, I didn’t know anything about comics,” admits Sheryl. “But I eventually convinced him to talk about it and we have now done a number of presentations. I am into it and it’s great!”

“It’s been fun speaking to people,” says Gerald who together with his twin brother Alex who is also a collector spoke to a group of over 200 people at Beth Avraham Yoseph of Toronto congregation during Holocaust Education Week. “I feel that I have an obligation to let people know that Jews were instrumental in creating the comic book genre and how Jews used the medium to influence public opinion to help other Jews.”

To paraphrase Mordechai, “Who knows, perhaps Gerald and Sheryl Hartman were brought together for a purpose such as this.”

7 Things An American Pickle Gets Right about Judaism
It Takes A Lot Of Faith To Be An Atheist
How Instagram Brought Back This Nostalgic Soup
What Makes Eli Run?
Comments
MOST POPULAR IN Jewlarious
Our privacy policy