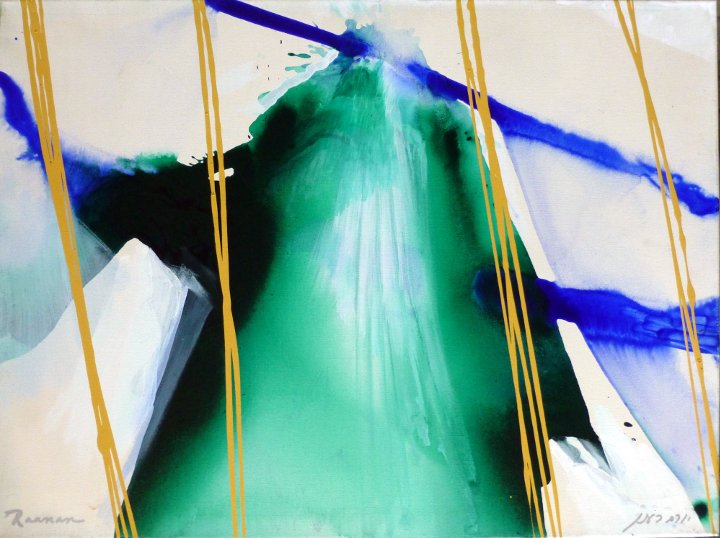 As the people fell prey to the seduction of the daughters of Moab, Zimri, prince of the tribe of Shimon, brazenly cohabited with a Midianite princess before Moses and the people. Pinchas “saw this, arose from the congregation, and took a spear in his hand.” He drove his weapon through the couple, bringing an end to the plague that had been ravaging the people stopped.

Bold strokes of paint capture the towering figure of Pinchas, who rises like a mountain of strength. His arms extend from his torso like blue spears. His body emits an energizing green light.

In contrast to the horizontal spears or arms, vertical yellow rays of spiritual energy descend, as God extends to Pinchas the covenant of peace, the privilege of becoming a Kohen for him and his descendants, as a reward for his courageous act. The Lubavitcher Rebbe stated that the true greatness of Pinchas was that he acted in complete opposition to his peaceful nature, transcending his inborn instincts in order to bring reconciliation between God and Israel.

Burning Bush
Why the Mezuzah is Placed on a Slant
Faith: the Axis Upon Which the Wheel of Science Turns
Love - Not Just About Chemicals Anymore!
Comments
More Articles on Pinchas
MOST POPULAR AT Aish.com
A Jewish American Tale
Our privacy policy