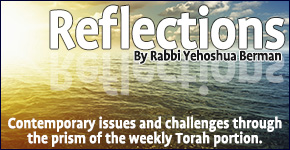 The parsha opens with the reward of kehuna (the priesthood) given to Pinchas for his valiant act of defending the honor of God by eliminating Zimri1, and thus bringing a halt to the plague that was decimating the Jewish People as a result of their sinning with the women of Midyan2.

The parsha closes with a lengthy description of the daily, Shabbos, and Yom tov sacrifices3.

The sequence of topics in the parsha makes it clearly understandable how it is logical to proceed from one topic to the next. After detailing the reward of Pinchas and the revenge that should be taken against the people of Midyan, the verses describe how Hashem commanded Moshe to count the Jewish People after the plague wiped out a large number4. Once this final count before entry into the Land is executed, Hashem commands Moshe to apportion the Land to the People proportionate to the relative population size of each tribe5. Once this final matter is arranged and they are ready to go into the Land, Hashem tells Moshe that it is time for him to die and for Yehoshua, Moshe's primary disciple, to take over6. Immediately following this is the topic of the sacrifices, which is readily understandable because it is the central aspect of being in the Land.

One cannot help but wonder, though, if there is any other, more direct and substantial connection between the opening and closing topics of the parsha.

For starters, the Kohanim are the ones who carry out the service in the Beis Ha’Mikdash, and it is the exalted status of kehunah with which Pinchas was rewarded. This is already a reasonable connecting factor between the two topics.

Perhaps the following question, though, will deepen our understanding of this matter. What is it about the service that makes it so fitting a reward for Pinchas' courageous act of being mekadeish Sheim Shamayim, sanctify God’s Name, and saving the Jewish People from further destruction?

The verse describes the gift of kehunah as a bris shalom, a covenant of peace.

Chazal conveyed to us that the first and greatest of all kohanim, Aharon Ha’Kohen, was the quintessential oheiv shalom v’rodeif shalom, one who loves peace and chases after peace7. It would seem, then, that the status of kehunah is innately linked with the attribute of shalom.

Chazal teach us that the sacrifices bring shalom (peace) between Hashem and His creatures8. By fulfilling His will through bringing sacrifices to Him, we gain His favor9. The question we may ask about this, though, is why this mitzvah in particular? Aren't we carrying out the will of God when we do any of the mitzvos in the Torah? So what is so special about the mitzvah of bringing sacrifices that it brings about this harmonious relationship between the Creator and His creatures?

The Ramban writes that the act of bringing a sacrifice is akin to sacrificing one's very life to Hashem. The individual bringing the sacrifice is supposed to view the slaughtered animal as if it is instead of himself, and that really he should be sacrificing himself to Hashem10. But, in as much as it is Hashem’s will that we live and grow11 and not sacrifice ourselves to Him12, this is the closest that we can get to that complete and utter giving of ourselves over to Him.

In light of this understanding of the mitzvah of sacrifices we can now appreciate why it is that this mitzvah in particular brings about a special favor and forges a deep, harmonious relationship between the Creator and His creatures.

When the Jewish People sinned with the women of Midyan, they aroused Hashem’s great displeasure; and when Pinchas carried out his mighty act of being mekadeish Sheim Shamayim, he thereby restored the delicate balance of shalom between Hashem and His people.

It was not so simple for Pinchas to do what he did. The man that he eliminated was a high-ranking chief, and many people severely censured Pinchas for his "audacity". Indeed, it is not at all an exaggeration to say that Pinchas was putting his very life on the line by doing what he did. But he was prepared to do so. He was completely willing to sacrifice his own life for the sake of being mekadeish Sheim Shamayim and restoring the harmonious relationship between Hashem and His People.

In this sense, then, the parsha closes with the mitzvah which is the everlasting embodiment of Pinchas' heroic act of complete and total devotion to Hashem and His People. Pinchas, with his total giving of self for the sake of Hashem and the Jewish People, truly deserved to be rewarded with the eternal opportunity to carry out the avodah of bringing the sacrifice which manifests that expression of completely giving of oneself to Hashem and thereby creating and maintaining the shalom between Hashem and the Jewish People.

1. Who desecrated the Name of Hashem by sinning publicly.