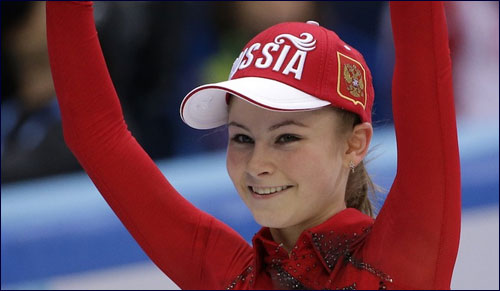 Russian figure skater Yulia Lipnitskaya’s breathtaking Olympic performance was memorable for many reasons. Flawlessly executing one demanding move after another, the 15 year old protégée became one of the youngest skaters ever to win the gold; her free skating routine brought the Olympic crowd to its feet and earned her a standing ovation.

But Lipnitskaya’s choice of music and costume has provoked comments too. Skating to the melancholy theme from the movie Schindler’s List – composed by John Williams and performed by Israeli violinist Yitzhak Perlman in 1994 – her free style program evoked the film’s mood. Lipnitskaya’s identification with the film was taken even further by her choice of costume: she wore a red outfit, reminding fans of the red coat worn by a little girl in what is perhaps Schindler’s List’s most moving scene, when a young child in red (one of the only colors to appear in this otherwise black and white movie) is shown running through the Krakow Ghetto during its brutal liquidation in 1943 by the Nazis.

Reaction to Lipnitskaya’s tribute to Schindler’s List has been mixed. “Schindler’s List: on Ice!” was the tweeted reaction of one fan; another asked when The Diary of Anne Frank would become an ice routine. Others, like the BBC, defended Lipnitskaya’s choices, calling her program beautiful and tasteful.

Lipnitskaya’s use of Schindler’s List imagery and music show just how universal the appeal of this powerful movie is. But using it in this way risks turning the film – and the events it depicts – into kitsch: a form of shorthand that allows us to tap into to emotions we haven’t really earned. Referencing the girl in the red coat is a way of evoking the emotions and feel of the movie’s powerful scene without asking that we do any of the thinking that actually leads us to those emotions.

What is the red coat scene about? Krakow had been home to Jews since the Middle Ages. During the Nazi occupation of Poland, Jews from Krakow, as well as from surrounding villages and towns, were confined to a Ghetto in the city, circled by barbed wire fences and walls, and were forced into labor in a number of factories, including Oskar Schindler’s. Many Jews were deported from the Ghetto to death camps, and on March 13-14, 1943, what remained of the ghetto was officially liquidated: 2,000 Jews were shot and the rest were transported to the Plaszow forced labor camp and to Auschwitz.

Much of the power from the scene in the film comes from its background music: the famous Jewish song about children called Oyfn Pripetchik, whose lyrical chords sound much like the famous Schindler’s List theme. Written by a Jewish Ukrainian lawyer, Mark Warshawsky, in the late 1800s, Oyfn Pripetchik became a hit in Yiddish-speaking communities across the globe.

Oyfn Pripetchik describes a world in which anti-Semitism is always present, in which Jews are threatened with tears, with danger, with exile from their land of Israel – but in which they respond to danger with strength, and counter hardship with optimism.

Understanding what it means to be a Jew is the best defense against anti-Semitism.

The song is deceptively simple: it’s about a rabbi teaching a class of tiny children the letters in the Hebrew alphabet. Through cajoling and bribes, he gets them to pay attention. He warns them of the many obstacles they will face: it’s difficult to begin learning something new; they might be threatened, or buffeted by fate. But, he stresses, the potential the Hebrew letters – and Jewish learning in general – will open up for them will sustain them through all dangers.

Understanding what it means to be a Jew is the best defense against anti-Semitism.

There are a few versions of Oyfn Pripetchik in circulation; below are the words to one. You can also hear Sam Glaser sing it here:

Yiddish Medley
Produced and Arranged by Sam Glaser
from the album The Songs We Sing
www.samglaser.com

(Refrain): Oyfn pripetshik brent a fayerl,
Un in shtub iz heys,
Un der rebe lernt kleyne kinderlekh,
Dem alef-beys.
On the hearth, a fire burns,
And in the house it is warm.
And the rabbi is teaching little children,
The Hebrew alphabet.

Lernt, kinder, mit groys kheyshek,
Azoy zog ikh aykh on;
Ver s'vet gikher fun aykh kenen ivre -
Der bakumt a fon.
Learn, children, with great enthusiasm.
So I instruct you;
He among you who learns Hebrew pronunciation faster -
He will receive a flag.

Ir vet, kinder, elter vern,
Vet ir aleyn farshteyn,
Vifl in di oysyes lign trern,
Un vi fil geveyn.
When you grow older, children,
You will understand by yourselves,
How many tears lie in these letters,
And how much lament.

Az ir vet, kinder, dem goles shlepn,
Oysgemutshet zayn,
Zolt ir fun di oysyes koyekh shepn,
Kukt in zey arayn!
When you, children, will bear the Exile,
And will be exhausted,
May you derive strength from these letters,
Look in at them!

The Matrix Resurrected: A Philosophical Examination
For Every Individual, A Torah Scroll
Allegiance To The Monarch
Meet the Real You: Yom Kippur
Comments
MOST POPULAR IN Current Issues
Our privacy policy
Aish.com Is Looking for Great Writers