How Schaja Kleinberg’s survived the Holocaust and saved a 400-year-old Torah scroll.

Ninety-two-year-old Schaja Kleinberg belongs to a very select group – he is one of the handful of Jews alive today who was on Oskar Schindler’s list, made famous by Steven Spielberg’s Academy-award winning film.

Schaja was born on April 1, 1920 in Bochnia, Poland to Avraham Schiya Heshel and Rivka Liba Kleinberg. Home to 3,500 Jews, Bochnia was laced with poverty, but the community was proud, self-sufficient and generous. The rich cared for the poor and everyone was treated with dignity. Tall, with thick wavy brown hair and a beautiful singing voice he would later use as a cantor, Schaja spent his teenage years studying as a Bobover Hassid and then pursuing a career in business.

September 1, 1939 was a Friday morning. Nazi Germany invaded Poland. Schaja and his father were immersing in the mikvah when the city’s sirens began to wail. The Kleinberg family ushered in Shabbat as usual that night and went to synagogue the next morning. By the time they were headed home for lunch, soldiers had entered the city by foot and motorcade.

Within days of the invasion, a tank pulled up next to Schaja and his brother-in-law who walking home one morning from shul.

“What’s inside your package?”

Schaja opened it up and took out his tallis and tefillin. 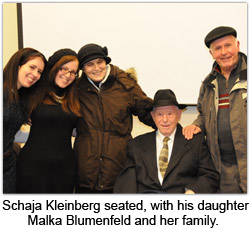 “We’ll hang you by those straps one day,” was the soldier’s reply.

The Jews of Bochnia were soon forced into a ghetto where life was difficult but still vibrant. One of Schaja’s two sisters worked as a maid in the home of an SS officer and was privy to inside information. When the liquidation of the ghetto began in 1941, she discovered her sister and mother were set to be transported to the death camp, Majdanek. Her SS employer insisted she stay and work, but she refused to abandon her family. She went with them to Majdanek, where all three perished.

The liquidation intensified through 1942, and Schaja’s father was finally sent to a concentration camp where he, too, perished. He was among the last 150 Jews in the ghetto.

Schaja’s work experience landed him a job in Schindler’s factory.

Schaja was among the last 50 Jews remaining in the Bochnia ghetto in 1942 before being shipped to the Plaszow forced labor camp in Krakow. In the ghetto, he had worked at an ammunition factory, and this experience landed him an auspicious job in Oskar Schindler’s factory immediately upon his arrival in Plaszow.

Thanks to Schindler, Schaja worked under relative safety, though he vividly remembers the infamously cruel camp commandant, Amon Goth. One incident stands out in particular:

Goth had a personal bloodhound trained to kill by attacking at the throat. When the dog came out, it was bad news. Once, Goth ordered the dog to attack a young boy, but the hound loved the boy so much it refused. Three times Goth ordered and three times it refused. In a fit of rage, he shot the boy and his beloved dog. From that day on, says Schaja, Goth became a stark raving lunatic, killing mercilessly.

Schindler’s workers didn’t see much of the man himself, says Schaja. On a daily basis, they dealt mostly with Itzhak Stern, his Jewish accomplice and secretary. During the liquidation of Plaszow in 1943, Kleinberg and a group of men were ordered by the SS to dig their own graves to be shot. As they were digging, Schindler himself came storming toward them, screaming “Stop! This is one of my workers!” referring to Kleinberg. Schindler personally saved his life that day.

Eventually, Schaja was transported to Zwittau-Brinnlitz along with the other approximately 1,100 lucky names on Schindler’s list, where he worked under his protection until Soviet liberation in 1945. By the war’s end, he’d lost 61 family members and was one of only 50 remaining Jews from Bochnia. 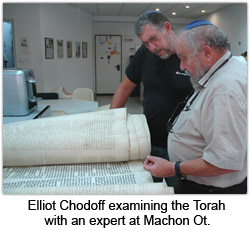 During his years in Schindler’s factory, he’d developed a friendship with brothers Moshe and Mechel Essig. If they all survived, the brothers said, Schaja would marry their sister Matilda. Schaja was skeptical. When he realized no one remained in Bochnia, Schaja went to Krakow to find his friends and there he fell in love with their sister. Matilda and Schaja were married in Prague and soon settled in Munich.

One day, Schaja was walking down the street when he noticed something disturbing. A German store owner had hung tallesim in the storefront window as curtains. He went inside and approached the woman at the counter, who explained that her husband had served in the German army and brought home an assortment of Jewish items he’d collected during the war. Schaja insisted she take down the holy ritual items from the window and hand over the other stolen goods, but she refused.

A German store owner had hung tallesim in the storefront window as curtains.

“The army is waiting outside and they’re prepared to come in here and arrest you if you don’t give me the items,” Schaja said. It was a spur-of-the-moment lie, but it worked. She handed over the talleisim and a collection of photos, amongst them an original picture of the Bobover Rebbe.

From that day on, Schaja developed a reputation for retrieving Jewish stolen goods whenever possible, which soon led him to an encounter with a man with a remarkable tale.

It was Kristallnacht, November 9-10, 1938, and Nazis were knee-deep in a frenzied destruction of Jewish businesses and synagogues. When they approached Munich’s main synagogue, the non-Jewish janitor convinced them it would be foolish to burn it and risk damaging the famed Munich Opera House nearby. He even convinced them to spare the interior and instead use it as a horse stable.

Risking his own life, the janitor whisked away two Torah scrolls from the ark and buried them in a non-Jewish cemetery. After the war, the synagogue reopened and the man returned to his job. He exhumed the scrolls and returned them, but years underground had rendered them unfit to be used in synagogue service according to Jewish law, so the community stored them away.

Eventually, Munich’s rabbis decided to bury the relics, but Kleinberg wouldn’t hear of it. To him, they were symbols of faith and survival.

So Schaja kept the scrolls with him in Munich and then brought them across the globe to Oak Park, Michigan in 1989, where he and Matilda relocated to be close to their daughter and son-in-law, Malka and Aaron Blumenfeld, and their five children. For two decades, the Torahs sat wrapped in blankets in the Blumenfeld’s cedar closet.

In 2004, Schaja’s granddaughter Aliza (Blumenfeld) Chodoff made aliyah to Israel. During her first Sukkot in the country, she was struck by the joyous dancing with Torahs and couldn’t help but remember her zayde’s scrolls in Detroit. 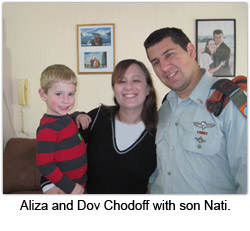 “I kept thinking, wouldn’t it be cool if we could just dance with them? Even if they weren’t salvageable, just to dance with them,” says Aliza, who today lives in Carmiel with husband Dov, an officer in the IDF, and their three-year-old son, Nati.

In 2006, Aliza’s father-in-law, Elliot Chodoff, took interest in the Torahs and decided to fly one scroll across the ocean to Jerusalem.

Experts estimated the Torah to be 400 years old, written in a style rarely seen today.

“Aliza told me about the Torah and that it couldn’t be repaired,” says Chodoff, a political and military analyst who lectures around the globe on the Middle East conflict and the war on terror. “I’m not an expert, but when I saw the torah it was my opinion that it could be repaired.”

So he brought it to the country’s leaders in Torah restoration, Machon Ot in Jerusalem.

Experts estimated the Torah to be 400 years old, its letters written in a unique style rarely seen today. The non-profit organization agreed that it was repairable; Chodoff just needed the funds, several thousand dollars. So he began fundraising in 2006.

In a fascinating twist, Chodoff found himself seated across the table from a close relative of Oskar Schindler’s, a Catholic educator, during dinner at a speaking engagement. Enthralled by the story, she enlisted her church to help raise the funds. 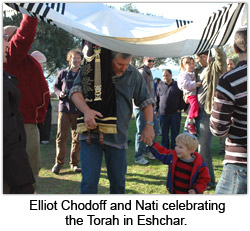 It took six years, but on December 9, 2011, the hilltop community of Eshchar in Israel’s Galilee region welcomed the fully restored Torah with dancing and singing.

A founding member of Eshchar, Chodoff calls the growing town of 150 families a “model community in Israel” where religious and secular Jews live together as close-knit neighbors and friends.

Schaya’s determination, which eventually brought a Torah back to life, also rebuilt his family. He never abandoned the faith of his youth and today has nine grandchildren and 22 great-grandchildren across the U.S. and Israel from children Malka Blumenfeld of Detroit and Oskar Kleinberg of Toronto. He’s a beloved member of the Kollel Institute of Greater Detroit, and though he long ago retired from his 45-year-long career as a cantor, his powerful voice remains a staple at family weddings and bar-mitzvahs, as well as Holocaust survivor gatherings, where he often recites a soul-stirring Kaddish and Kel Rachamim.

“I was given the gift of life, survival,” Kleinberg says. “These scrolls also had the right to live. I couldn’t abandon them just because someone said they were too old.”

Today, one such scroll lives again in the Jewish homeland, a symbol of hope and rebirth more than seven decades after the Holocaust.

The other scroll from Munich, plus one more that Kleinberg was given for safekeeping at a Displaced Person’s camp after the war, remain in Detroit.

Humanity's Litmus Test
It Takes A Lot Of Faith To Be An Atheist
How Instagram Brought Back This Nostalgic Soup
What Makes Eli Run?
Comments
MOST POPULAR IN Holocaust Studies
Our privacy policy