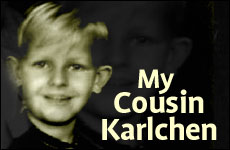 The Nazis' plans to perfect the Aryan race began with little Karl and his friends.

We called her Aunt Edith, but she was really my father's cousin. She lived not far from our town in Germany. It was 1940, and her husband had recently died in the war. So all she had was her little son, Karlchen.

Soon after Karl was born, Aunt Edith realized that something was wrong. This sweet boy reacted more slowly than other children, and spoke very late and never very clearly. Aunt Edith was despondent to discover that he would never be able to go to school, and would not be quite normal for the rest of his life.

But Karl was a happy child. He laughed and smiled all day long, and it was easy to make him laugh. He loved his toys, especially a white teddy bear. With his beloved bear cuddled close to his body, Karl would sit in his mother's lap and sing his own special songs.

Aunt Edith met some other mothers in the little town where she lived. They had something in common. Their children were also not quite normal. But they played together happily and the mothers became friends.

One day a visitor came to Aunt Edith and Karl. This visitor was a Nazi leader in town. Why is he visiting us? Aunt Edith thought. The man smiled at the mother, and gave a special smile to the boy.

"You are so lucky. Your Karlchen has been chosen to go on a month-long vacation, together with other boys of his age."

He then handed her a letter. "You are so lucky," he said. "As you know, our Fuehrer wants every German to be happy and healthy. So your Karlchen has been chosen to go on a month-long vacation, together with other boys of his age. It is a beautiful place, where he will be cared for, and the sun and the fresh air will do him good. This letter explains everything. He doesn't even need to bring anything with him because everything will be provided there." And with a friendly smile, he left.

Aunt Edith was not sure what to do. She did not want to part from her beloved boy, not even for a few weeks. On the other hand, he did look a bit pale, and the fresh air and sunshine would do him good. She decided to go talk it over with her friend who also had a special child. She would certainly understand.

Aunt Edith's friend was happy to see her. "Come in and sit down," the woman said with excitement. "I want to show you a letter that I received today."

Aunt Edith immediately realized that it was the same letter she had brought in her bag. "It is very nice that they are offering to care for our children," Aunt Edith said, "but I find it hard to let him go on his own."

"But the letter says that a bus will take them," the friend replied, "and that they can bring along their favorite toy. Red Cross nurses will look after them. And since all the children of our group are invited, they will have friends to play with and not get homesick."

Aunt Edith thought again. "It will be good for Karl. Maybe I am just a self-centered mother who can't stand to be away from her child for a few weeks."

In the end she decided: "Okay, I will let him enjoy the first vacation of his life. We all want the best for our children -- even if we'll suffer a bit not having them around."

The big day finally arrived. The bus came and the mothers gathered to say goodbye. Some children started to cry, including Karl. But the friendly nurses took the children, one by one, and helped them get settled into their seats on the bus. Little Karl clutched his white teddy bear, and with tears in his eyes, waved to his mother. Aunt Edith felt a pang of remorse, but reminded herself that he will soon be having fun, and will come back happy and healthy. The bus drove away, and Aunt Edith quietly went home.

Day and night, Aunt Edith thought about her little son. Was it really a good idea? Is he managing alright?

Three days later the mailman brought a letter. Aunt Edith thought it was news about Karl. She excitedly opened the envelope, and as she started to read, the color of her face changed to a pale white. She began to scream: "That cannot be! That cannot be!"

She fell on a chair and nearly fainted. She looked at the letter again, not believing what was written:

We regret to inform you that your son has died suddenly from pneumonia. The body was cremated, and the urn has already been buried. According to our calculations, you owe the amount listed below for burial expenses; please send us the money.

Aunt Edith, screaming and crying, ran to her friend. She found her friend crying too, holding a similar piece of paper. The same typewritten words, the same horrific news, the same request for payment. All the mothers who had sent their children away on vacation had received the exact same letter. Every child had "suddenly died of pneumonia."

The mothers realized that something terrible was going on. Their children had been murdered. But they were scared of the Nazis, and decided it would be better to keep their mouths closed.

Many years later, one of the nurses told Aunt Edith what had happened to her little son. The Nazis had instituted a program called Action T4, whereby people with mental or physical disabilities – about 200,000 German citizens – were systematically killed as a way to clean up the gene pool in preparation for building the master German race.

And the nurses thought: Let them eat. By tomorrow, none of this will matter. They are all idiots anyway.

The nurse explained that when the busload of children arrived at its destination, the nurses started to sing sweet melodies. The children were given as much candy as they wanted. And the nurses thought: Let them eat. By tomorrow, none of this will matter. They are all idiots anyway.

The children were taken to a park. By this time they were very tired. "Take off your clothes and hang them on these hooks," the nurses gently explained. "We will take a nice shower and then go to bed."

The children went into the shower room and waited for water to come from overhead. But none came. Instead there was gas that left them gasping for breath. They cried out: "Mommy, Mommy!"

By the time the nurses finished drinking their coffee, it was quiet, and all the children were dead. The bodies were burned in the crematory.

The director sat on his desk and recorded how many minutes it had taken until all were dead. Those children were a convenient way to test how much poison gas was needed. The Nazis had many more plans. Little Karl and his friends were only the beginning.

Details of Action T4 are online here.
Like What You Read?  Give Jews around the world the chance to experience engaging Jewish wisdom with more articles and videos on Aish. It would make your mother so proud and as a nonprofit organization it's your support that keeps us going. Thanks a ton!

Four Perfect Pebbles: Clinging to Hope in Bergen-Belsen
Scientific Curiosity and the Divine Encounter
Mind Over Milkshakes
Love the Convert
Comments
MOST POPULAR IN Holocaust Studies
Our privacy policy
Aish.com Is Looking for Great Writers