Religion in America is Fading 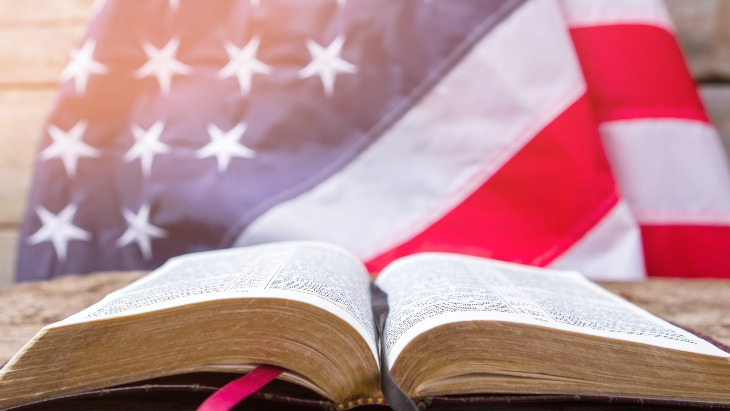 But true believers are everywhere.

"Do you happen to be a member of a church, synagogue, or mosque?"

It was 1937 when the Gallup Poll first asked that question, one it has asked at regular intervals ever since. For more than six decades, church membership in America was quite high: It was 73 percent in 1937, and remained in the low 70s for the rest of the century. But beginning around 2000, the number of Americans belonging to a house of worship went into a nosedive. Gallup reported last month that church membership had sunk to just 47 percent. For the first time ever, only a minority of American adults are affiliated with a church.

This decline in membership is primarily a function of the rise of the "nones" – the one in five Americans who identify with no religion, a share of the population as large as evangelicals or Catholics. Among younger Americans, the lack of religion is even more pronounced: More than 30 percent of millennials and Generation Z claim no religious affiliation.

Some prominent secularists were quick to applaud the latest trend. "This increasing godlessness in America," wrote sociologist Phil Zuckerman in the Los Angeles Times, "is actually a good thing, to be welcomed and embraced." At the Friendly Atheist website, founder Hemant Mehta celebrated with an end-zone dance: "Congratulations, Atheists: Church Attendance in America is at an All-Time Low."

But the disappearance of religion from American life is not a reason for optimism.

To begin with, researchers have long known that church attendance and religious services are positively correlated with physical, mental, and social health.

Peer-reviewed studies show that regular worshipers tend to live longer, to suffer lower levels of stress, to have fewer symptoms of depression, and to have better cardiovascular and immune function. Similarly, the data suggests that religious worshipers tend to be happier, to drink less, to have lower rates of drug abuse, and to give to charity and donate blood at above-average rates. Amid the ly difficult circumstances of the pandemic, a survey of self-reported health conditions found that Americans who attended religious services regularly were the only demographic group that appeared to avoid a decline in their mental health in 2020.

Why church attendance correlates with such health and social benefits has not been definitively explained. But to the extent that religious practice across America is weakening, it seems only too likely that those benefits will fade too.

A very different effect of religion's disappearance is already all too visible: the unwavering faith and passion of true belief is increasingly being channeled not into religious observance but into identity politics and the culture wars.

"Political debates over what America is supposed to mean have taken on the character of theological disputations," remarks Shadi Hamid of the Brookings Institution in The Atlantic. "This is what religion without religion looks like."

"Religion without religion" is aggressive, intolerant, and scary.

On issue after issue, Americans increasingly treat political disagreement as blasphemy and dissenters as apostates. From climate change to immigration, from face masks to guns, debates take on the fervor of crusades, and true believers portray the stakes as all-or-nothing – a choice between salvation or damnation.

At its most extreme, this "religion without religion" is giving rise to dangerous political cults.

On the right, there is the Trump cult with its QAnon conspiracies and adoration of a savior who can do no wrong – someone whose followers cannot be deterred by anything he says, no matter how false or absurd. In the blindness and ecstasy of their faith, thousands of them went so far as to storm the US Capitol in an attempt to overturn the 2020 election. 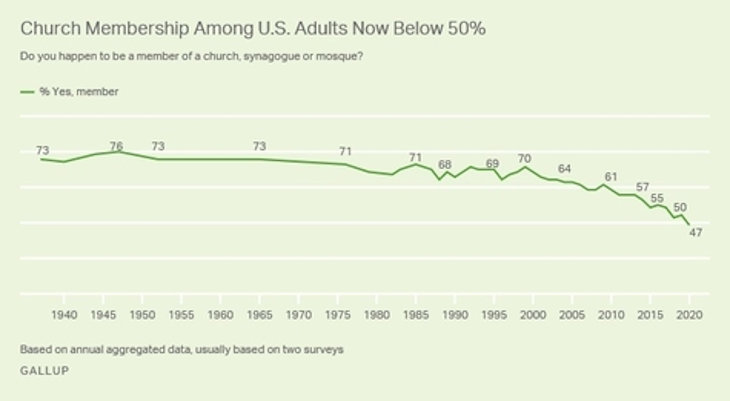 For the first time, less than half of Americans attend a church, synagogue, or mosque.

On the left is the cult of wokeness, in which everyone, in Andrew Sullivan's words, is either "good or evil, antiracist or racist, with virtue attached, horrifyingly, to skin color or gender" – a cult as fixated on banishing sinners, punishing heresy, and forcing public confessions of guilt as the Inquisition might once have been.

As fewer Americans find meaning or fellowship in houses of worship, more of them will embrace the tribal solidarity and judgmental certainties of ideology. Instead of turning to religion in hope of redemption, Americans will turn to politics. With one huge difference: Fundamentally different faiths and churches have long coexisted in harmony. Religion flourishes peacefully in America because church and state are separate. No one is forced to adopt anyone else's faith. Disagreements are not fatal. Indeed, they need never be resolved – at least, not in this world.

But there is no separation of politics and state. In the culture war, the quest is always to win and the fight must be had now, for there is no afterlife to which deliverance can be postponed. "Religion without religion" is aggressive, intolerant, and scary. As America's houses of worship continue go dark, what is taking their place is a society even atheists will come to regret.

Childhood Dreams
Lessons from the Book of Jonah
Where Are We? The Body, Brain, Soul Problem
Dr. Sheila Nazarian’s Escape from Iran
Comments
MOST POPULAR IN Current Issues
Our privacy policy
Aish.com Is Looking for Great Writers