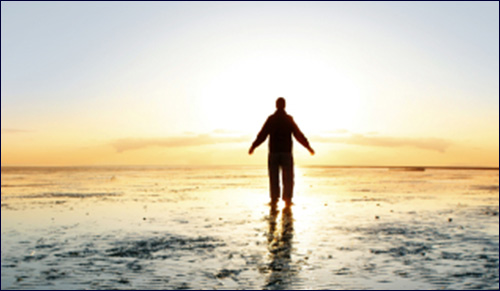 Hanukkah is the time to acknowledge miracles. This year our family experienced an amazing one.

I’m a private person, but on the eve of Hanukkah when we acknowledge and thank God for the miracles He performs “in those days and in our times,” I feel that it is important to describe some moments from our family’s most difficult year.

A year ago, my sister got married in Jerusalem. It was an especially joyous occasion since she was the last of our four siblings to tie the knot. My parents were thrilled to be marrying off their last child. The day after the wedding, my sister told my father that he didn’t look well. “I’m feeling sick from paying the wedding expenses,” he jokingly replied. But we all then noticed that my sister was right. Dad’s skin and eyes had an irregular, yellowish hue. 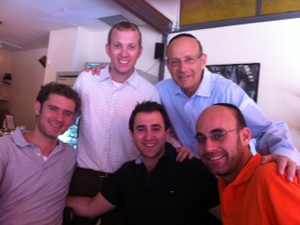 (Right to left) Dad, me, the groom and two sons in law on the day after the wedding when we noticed that Dad didn’t look so good.

As soon as they returned home to Ohio, my father scheduled a doctor’s appointment, which led to an exam, which led to a test, which led to the terrible diagnosis: pancreatic cancer. Pancreatic cancer is a particularly lethal form of an awful disease with very discouraging and pessimistic survival rates since it forms so deep in the stomach that there are hardly any symptoms until it is often too late. For us it was even worse; we were all too familiar with its deadly reputation since my grandfather died from it ten years ago.

After the initial shock wore off, we all went into overdrive: scouring the internet for helpful resources, reading everything we could, signing up for alerts from the Pancreatic Cancer Action Network and generally doing everything in our ability to stay positive and not allow ourselves to become discouraged. Mom transformed into the family cheerleader, Dad was brave and determined, and my siblings did what we were always trained to do by our parents from the time we were children: we prayed. My sisters divided up Psalms among several family members and friends and we completed reciting the entire Book of Psalms every day.

We got a crash course in oncology, and learned about the different kinds of radiation and chemo cocktails that Dad would undergo to hopefully shrink the tumor so it could eventually be removed in a difficult procedure called the Whipple. My parents flew to New York and met Dr. John Chabot of Columbia Presbyterian Hospital. He was extremely accomplished and well respected, but what impressed my parents the most was that Dr. Chabot was a “mensch,” a soft spoken and dignified gentleman whose kindness and humility made them confident that he was their man, the agent God would use to carry out His will.

”Tomorrow isn’t your death sentence, tomorrow is your new lease on life!”

The day before surgery, we went to get a blessing from Rabbi Binyamin Eisenberger in Brooklyn. With penetrating intensity, the young, saintly rabbi told my father, “Don’t be scared. Tomorrow isn’t your death sentence, tomorrow is your new lease on life! You will have a successful surgery provided you fully believe that no matter how skilled your doctor is, that God is your healer. You must not even be 1% nervous or fearful. You will be a living example and inspiration to others that God can do anything. Nothing is too challenging or small for the Almighty, and He can even remove pancreatic cancer.”

Dad deeply wanted to be that living example and inspiration to give others hope that God is the source for all blessing and miracles. 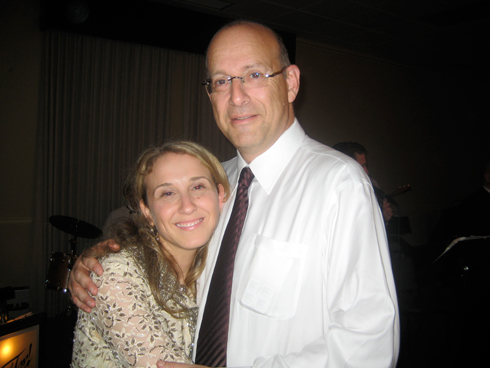 My father and sister

At the hospital at six am, the entire family – from Israel, Montreal and Ohio – had gathered together. We were terrified, but my father was surprisingly calm and peaceful. Moments before getting wheeled into surgery, Dad turned to Dr. Chabot and said, “Doctor, my family comes from the line of Jewish priests going all the way back to Aaron, the brother of Moses. In the Temple in Jerusalem, the Kohanim would bless the people of Israel with a special blessing that I would like to bestow upon you today, ‘May God bless you and safeguard you.’” We all had tears in our eyes, but that’s Dad, always with his love for Judaism and his heritage at the forefront of his thoughts. He went into surgery at peace, placing himself entirely into God’s loving hands.

We headed into the waiting room. Unlike on television, there are no constant updates from the surgical team. Two hours went by with no word from the doctors. Four hours went by without any notification. Six hours, eight hours, 10 hours… and then finally after 12 hours, Dr. Chabot emerged. The tension was a mile thick, the verdict was in. We all gathered fearfully, but hopefully, “We got it out. We removed the cancer. All of it.”

Could it be true? We couldn’t believe our ears. Thank God! Dr. Chabot had used a cutting edge breakthrough that wasn’t even available six months prior, and was perhaps the only surgeon in the U.S. who could have done it. Clearly, he was the right messenger, God’s assigned angel that my parents recognized the first time they met him. We were overjoyed and weeping in the waiting room. God had performed a great miracle for us and we were deeply humbled.

This week marked Dad’s last post-op chemotherapy session. After a grueling, stressful year of biweekly chemo treatments, the nurses presented my parents with a triumphant survivor certificate that they all signed. My parents left the Ohio State University hospital with overwhelming gratitude to the entire medical staff who had been so encouraging throughout this difficult year.

By sharing our story and raising our voices during Pancreatic Cancer Awareness Month, my family wants to publicly thank all the nurses and doctors who helped get my dad to this happy milestone. Anyone devastated with bad medical news must not lose hope, but must know that there are many positive stories. As important as it is to learn all about the chemo cocktails, my family learned about another potent combination. With the right mixture of support from friends and family, prayer, positive attitudes from a caring medical team, Mom’s encouragement and Dad’s brave will to fight, there is hope. God can even remove pancreatic cancer.

Rabbi Tuly Weisz is the director of www.Israel365.com and publisher of www.BreakingIsraelNews.com who lives with his wife and children in Ramat Beit Shemesh.

Encounter in the Grand Canyon

Our Landlord, the Rabbi

Loving the Father I Hate

My Neighbors, My Heroes, Part 2
The Softball Player
How This 6 Generation Bread Baker Brought Back Israel’s Ancient Grains
Olivia Newton John’s Grandfather was a Nobel-Prize Winning Jewish Physicist
Comments
MOST POPULAR IN Spirituality
Our privacy policy
Aish.com Is Looking for Great Writers