Mammogram: My Fear of Cancer and Learning to Trust in God 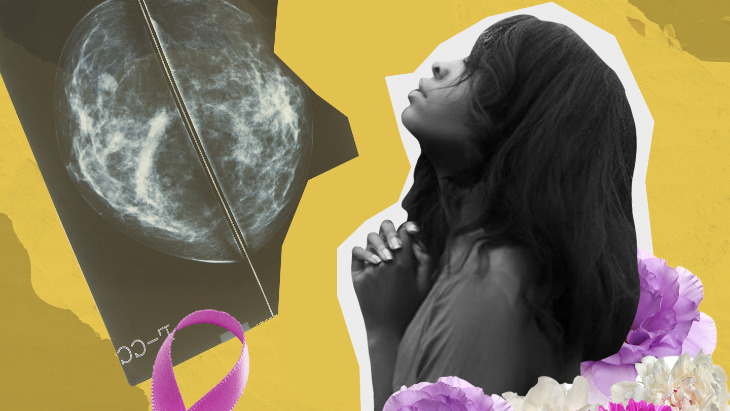 My cancer scares have forced me to struggle with the reality that everything that happens to me is for my good.

Having your breast poked and prodded by a technician (however nice she may be) before being tightly pinched between two pieces of clear plastic, while you hold your breath and toxic rays are shot through your body, just can't be any reasonable woman's idea of a good time.

And this is especially true if it's for the dreaded "follow up appointment" – the one you have to have because there was something the doctor didn't like after examining the film from your original fun appointment.

The first time this happened to me was over half my lifetime ago. I had to have two mammograms and a biopsy.

I was completely terrified.

Breast cancer was… is… my greatest fear.

I didn't have another abnormal mammogram until about three years ago. When I was told I had to have that follow up examination, I was once again terrified.

But this time, there was a difference: it was nearly 15 years after I'd converted to Judaism.

I left the doctor's office, sat in my car and cried, tears of relief and joy.

Unlike previous times when I didn't talk about this with anyone, I asked everyone I knew to pray for me. I still couldn't bring myself to tell anyone exactly what the issue was, just that it was medical. And I recited a lot of Psalms – outside in the parking lot, in the waiting room before I entered the doctor's office, and after the procedure I read the 23rd Psalm in my not-very-good Hebrew over and over as I waited for the results.

I left the doctor's office, sat in my car and cried, tears of relief and joy. I sent text messages to my friends thanking them, and of course, I thanked God.

I hoped it would never happen again. But it did.

Because of the pandemic, it was close to two years before I had the pleasure of another mammogram and another result that demanded a follow up.

This time though, amazingly, I was not terrified. Partly it was because I'd been through this before, twice.

And partly it was something I discovered during my Jewish journey.

I have Emunah, faith in God. I know in my heart of hearts that God exists. I can't really explain to anyone how I know that. But I do.

In Rabbi Joseph Soloveitchik's book The Lonely Man of Faith, he explains that you can have an experience that leaves you with no doubt that God exists, but you can't explain it to anyone else. It is an experience completely to each person and there are no words, nothing you can say or do to explain it to someone else. Thus, it is the most wonderful, uplifting – and the single loneliest experience – that anyone can have.

I've had my own "lonely" experiences of God at different times around the world, before I became a Jew. Still, that knowing didn’t keep me from being terrified the other times I faced the possibility of breast cancer.

It is only since I have been on my Jewish journey that I learned about genuine trust in God, called "bitachon" in Hebrew.

It is the deep-seated feeling that since God runs the world and loves every one of us, everything that happens is for our good.

We may not understand it. It may not be what we want to happen, but if God put it into our lives, it is somehow the best thing that could happen to us. This I struggle with.

We may not understand it. We may not feel that it is. It may not be what we want to happen, but if God put it into our lives, it is somehow the best thing that could happen to us.

This I struggle with.

I didn't tell anyone about my latest second mammogram appointment because this time, deep down, I had hope. I hoped, in my heart, that whatever happened, even if I had cancer, it would, in fact, turn out to be for the best.

Not being perfect, I was still afraid. But I hoped as hard as I could, that nothing would be found.

I accepted as much as I could that if something was found and I had to be treated, or operated on, or even if it was the first step toward my death... I took a deep breath and a firm hold of that hope and for the first time I felt it might be okay, that whatever happened would be for the best.

Still, it was a huge relief when the results from this most recent mammogram were clear of cancer.

Trust in God, bitachon, is something I've struggled with since I first learned about it, and I suspect it will be a lifelong struggle.

But I try. I’m going to keep holding on to the hope I felt as I waited for the results of my latest mammogram.

Because God runs the world, and I'm working on living with the reality that everything that happens to me is for my good.

Saying Goodbye to My Dying Father
Bechukotai 5782: Divine Retribution
Behar 5782: Working to Live or Living to Work?
The Wholeness of Being Broken
Comments
MOST POPULAR IN Spiritual Odysseys
Our privacy policy