How a Mammogram Taught Me to Control My Temper 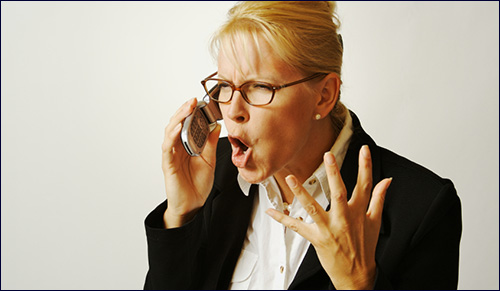 My plea bargaining with God.

I found the lump on a routine breast exam. As a holistic physician, I’m mindful of radiation, and so although I make a point of checking myself monthly, I don’t often go for mammograms. It was a small lump, about the size of a pea, in my right breast. I was not worried. I’d had lumps before, and they’d always turned out to be benign.

The months went by, and the lump did not disappear. I thought about going for a mammogram, but that was always an ordeal. Invariably, I’d be called back for more and more views, which amounted to more and more radiation, and in the end, it was always nothing. I thought of going back to see the breast surgeon who had aspirated my last cyst, but he had told me not to bother unless I first went for a mammogram. Moreover, my son was getting ready to leave for yeshiva in Israel and I had other things on my mind.

So I did nothing. Then I turned 60. Statistically, that put me in a higher risk group. One of my patients, in her 60s, had recently been diagnosed with breast cancer. That gave me pause.

Finally, I scheduled an appointment. Then I called my GYN and asked the secretary to fax in a prescription with the comment, “Lump in right breast at 3 o’clock.”

I had made many changes over the years but controlling my temper still eluded me.

The day before the mammogram, I received an automated confirmation call, but they gave me the wrong time. I tried calling, but they kept putting me on hold. No matter how many times I tried, I could not speak to a person. When I finally got someone on the line, they couldn’t locate my file. I was livid. I found myself speaking to the receptionist in the all-too-familiar voice of barely controlled rage that said so unmistakably, “You are an idiot and not worthy of my precious time.”

A twinge of guilt washed over me – here it was, the month of Elul, a time for making changes in one's life. I had made many such changes over the years, going from a non-observant Jew to one who meticulously follows the laws of kashrus, Shabbos, and Yom Tov. Yet, controlling my temper still eluded me. Just within the last few weeks, I had lost my cool with a new patient who objected to filling out my confidential medical questionnaire, raged at the printer who’d lost my business card order, and repeatedly lashed out at the techies in India who service my computer. And now this receptionist. No wonder our sages say, “It’s easier to know the entire Talmud by heart than to uproot a single character trait.”

Well, still, these were my breasts, my life here. It was all I could really think about at the moment.

There is something unnerving about entering a building with the words “Cancer Center” on the front, as if just by walking in the building, you are somehow entering the world of cancer patients. Seeing an emaciated woman in a wheelchair being pushed inside only reinforced the image.

The concierge, an elderly black gentleman, greeted me as if I were an old friend and walked me over to the registration area. Although I knew it was routine, I found it unsettling to be asked my religion and if I had a living will, as if I were soon going to have need of both the services of a chaplain and a proxy to make decisions for me.

Eventually I was sent upstairs to change into a gown and wait some more. Each person I encountered asked me my full name and date of birth, and each time I felt my anxiety mounting. It brought back sad memories of when I had brought my father to the hospital in his final days.

As I sat down to wait, I felt a hunger pang. No wonder, it was already 11:30, and I hadn’t eaten since 7. I pulled out my hard-boiled egg and tomatoes that I’d packed earlier, a bit squashed but still edible. After a while, a technician came to perform my mammogram. “Just make believe you’re a rag doll,” she said, “and let me place you.” After she’d taken about eight shots she let me go, warning that she might have to call me back for extra views.

As I waited for the radiologist to give her verdict, I thanked God I’d chosen a place where they tell you the results right away, rather than leaving you hanging and making you come back week after week.

Logically, I told myself that since I have cystic breasts, this lump would likely be one, too. But then doubt set in – after all, you could never be sure, I was getting older, and what if this time… The words of the Rosh Hashanah prayer we’d all soon be saying drifted through my mind: how each one of us passes before the throne of judgment like sheep before their shepherd, how on that day it would be decided, who will live and who will die, who in his time and who before his time, who by fire, who by sword, who by beast, who by famine…who by breast cancer?

Suddenly I felt feeling unusually hot, pressure building in my chest. I decided to try some breathing exercises. A young woman, pleasantly plump, her curly brown hair pulled back in a ponytail, and wearing an identical gown to mine, sat down opposite me. “I wish you could eat in here,” she said, “I’m so hungry, and I brought my yogurt.”

“Who said you can’t eat here?” I responded. “I just had four cherry tomatoes and a hard-boiled egg.” Encouraged by my friendly response, the woman told me she had come in for a follow-up visit after surgery for a breast infection and that she was a bit nervous but guessed it would all be okay. “Just walking in the building can make you nervous,” I commented, and she agreed.

Resuming my breathing as my companion spooned her yogurt, I decided to try communicating with God. Exhaling deeply, I silently asked God to make the mammogram turn out normal. Remembering the CD I’d been listening to the day before, about the power of prayer, I decided to go one step further and ask that, even if the lump were malignant, could He please change it into something benign? There is no problem that God is not capable of solving through prayer, the rabbi had said. It is never too late to change one’s destiny. Just as the matriarch Leah had prayed for the baby she was carrying to be switched from a boy to a girl, so I could ask that He change my lump from cancer to a harmless cyst. But then again, who was I to compare myself to Leah?

If You will do this one small thing and make that mammogram normal, then I will stop getting angry.

Soon the tech reappeared to call me in for another view. She inquired if I had ever

taken estrogen and for how long. Many of my patients were afraid of hormone replacement therapy, but I hated hot flashes, and was more afraid of Alzheimer’s, which ran in my family, than cancer. Evidence shows that keeping your estrogen receptors active helps your brain, where these receptors abound. Nonetheless, 14 years of estrogen is a long time.

Back in the holding area, awaiting yet another radiological verdict, I decided to go whole hog. It wasn’t enough to just put in my request, I‘d better do my part as well. Okay, I said telepathically, I’m finally going to make good on my long unfulfilled promise to control my anger. I’m going to put an X on the calendar for every day I refrain from getting nasty with a clerk, or a tech support, or a receptionist who keeps me waiting. I will act as if I am speaking to a close personal friend and not some anonymous clerk in Kansas. I will be the good doctor who never gets short with patients even when they ignore all my instructions and ask me to do the impossible. If You will do this one small thing and make that mammogram normal, then I will stop getting angry, or at least see how many X’s I can accumulate in a row before I have to mark an O on the calendar.

Then I heard my name called. It was the ultrasound technician, directing me down the corridor. “Now show me where the lump is,” the woman said, after introducing herself. “Yes, right here,” I answered, pointing.

“But your doctor said it was at 3 o’clock,” she said reprovingly.

”Oh, I know what happened. I did the exam on myself so I got it backwards. If you’re looking at someone else it would be 9’o’clock but on yourself, it’s 3.”

This only made matters worse.

“You did your own exam? You didn’t see your doctor?” Her brows knitted together and she gave me an annoyed look. I could feel my own neck muscles tightening.

“No, I didn’t, I found the lump and then called the doctor and told her what to write.”

That went over big. She looked like she was about to say something sharp but then thought the better of it and turned away. I could feel my own annoyance rising and some unkind words forming in my mouth when I remembered my pledge. Stop acting like you’re the authority, I told myself. You are the patient now, not the doctor. This woman is only trying to take care of you.

“I’m sorry if I’ve caused trouble here,” I told her, shaking my head. “It was my mistake.” Those words were hard to come out of my mouth but they worked. I could actually see the lines in her brow disappear, a slight smile come to her lips. Surprisingly, I felt better, too.

I had another long wait before the radiologist finally appeared. “Well,” she said, “it looks like this is all benign. You have very dense breasts, and the lump is just a cyst.” The relief poured off my face like sweat on a hot summer’s day and the knots in my neck melted away. “Thank you,” I said, “and thank God.”

When I got home that night, I put my first X on the calendar.

Marjorie Brown is a physician and writer.  She lives in Brooklyn with her husband and son.

The Real Thing: Ethics of the Fathers 2:8

There is a Pharaoh and Moses Inside Each of Us
The Promise Of The Land
Which Chat Are You On?: Parshas Behar/Lag Ba’Omer
Do You Like Slow-Cooked Food? Thank the Jews
Comments
MOST POPULAR IN Personal Growth
Our privacy policy