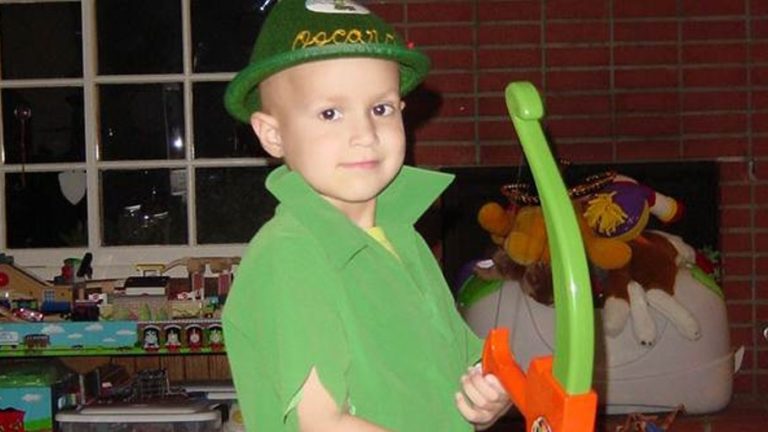 After the death of their young son, Sharon and Roberto Litwak are bringing joy and comfort to sick kids with mobile play stations.

Sharon and Roberto Litwak were newly married immigrants from Mexico when their world was upended. Sharon was enrolled in a Ph.D. program at Johns Hopkins and her husband had his first job in Washington, DC. They were excited to welcome their first child, Oscar into the world. Unfortunately, at a mere 4 months of age, Roberto noticed that his son's belly was unusually hard. It was a Sunday morning and their pediatrician told them to come right over.

After a brief examination, he sent them immediately to Children’s Hospital D.C. The ER there was a nightmare, especially on a Sunday – no beds, no strollers, he had to be held all the time, no private rooms for breast-feeding.

Doctors immediately discovered a tumor and a biopsy revealed cancer in the kidney. It was a Wilm’s tumors, the result of a missing suppressor gene. The news was shocking but the doctors were optimistic. The oncologist informed the frantic parents that it was a type of tumor that was responsive to chemo and the nurse said, “If you’re going to have cancer, this is the one to have.” 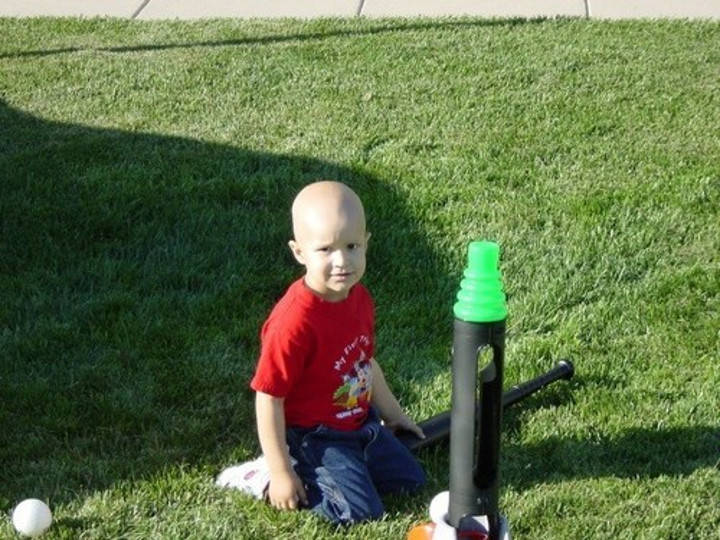 After the surgery, Sharon noticed that her son was bleeding at the site of the incision. She couldn’t get anyone to listen to her. This was a moment of transformation. Sharon went from a very shy young woman to a Tiger Mom. She marched into the surgery floor and demanded to speak to someone NOW. She learned the hard way that she had to be the one advocating for her child

Baby Oscar spent a week in the hospital and was then discharged with a plan for outpatient chemotherapy. Any fever (and there were many) led to re-admittance. Sharon dropped out of graduate school (even if she had the time, the inclination and the energy, she couldn’t be around all the germs) to tend to Oscar’s needs full-time.

One month into the treatment, one kidney started bleeding (possibly because a young intern pressed on it too hard but no one knows for sure) and it needed to be removed. And due to the bleeding, there was a chance that some cancer cells may have escaped, so radiation was added to Oscar’s treatment plan.

After a year, the tumor seemed to have disappeared. Roberto and Sharon had let their breath out and begun to plan again. But it was not to be. Six months later, a routine CT scan showed it growing again. In some ways this was more overwhelming than the first time around. This new tumor demonstrated the need for a more aggressive regimen of chemotherapy.

Small children and infants were expected to sit still for hours. Sharon requested use of the playroom but was told it was only for inpatients. An idea began to germinate. 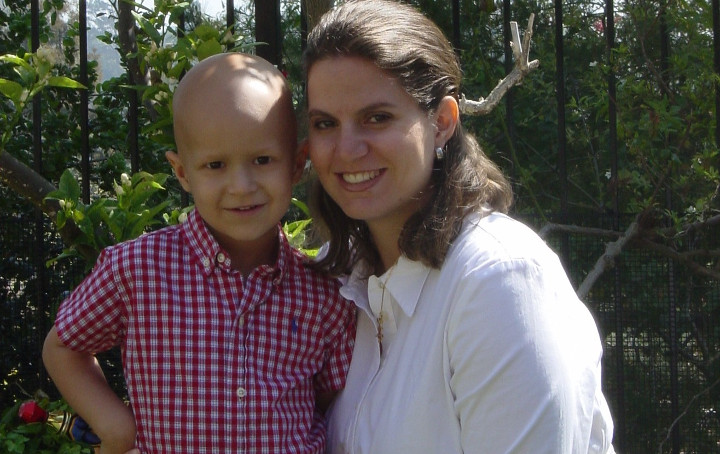 The treatment finished, there was a central line to clean and maintain but this became routine and Oscar started going to school a few days a week. After six more months of maintenance, Roberto’s family in Los Angeles encouraged him to join them in their business and benefit from their emotional support.

Their first meeting was with Oscar’s potential doctor. Only after discovering they liked him, did they agree to move. Besides the family in LA, they were closer to Mexico and their support system.

In the chaos of switching jobs, the insurance wasn’t renewed as quickly or appropriately as necessary and Oscar missed one of his CT scans. The doctor, however, was unconcerned and Sharon and Roberto continued to adjust to their new life.

When Sharon was 7 months pregnant with their second child, Oscar finished his treatment and did a final CT scan. The results were staggering. The tumor had grown significantly and now his second kidney had to be removed. The date chosen for surgery? The same as Sharon’s due date.

But their new baby had other plans and their daughter was born two weeks early. When Sharon went to shul to give her a Hebrew name, Oscar started feeling really sick. He was admitted to the hospital and had further surgery where they determined the cancer had spread to his lymph nodes. Sharon’s mother came from Mexico to watch the baby while Sharon and her husband moved to a hotel near Children’s Hospital Los Angeles. She was back and forth to her home to feed the baby and back and forth to the hospital to tend to Oscar.

The cancer had spread and the doctors had no more treatment options.

Oscar turned four in the hospital and the next day brought more bad news. The cancer had spread and the doctors had no more treatment options. The Litwaks decided to bring Oscar home. He could no longer walk and they carried him or pushed him in a stroller everywhere including one memorable trip to Disneyland along with his two-month old sister, Andrea.

Sharon and Roberto were very afraid of what kind of decisions they might have to make about Oscar’s future medical situation but they were spared that additional pain when Oscar quietly passed away one night, probably of a heart attack.

Although Sharon felt pain and despair, she had Andrea to take care of so she couldn’t give up. "I have always believed in an afterlife and that we are in this world to learn some lessons before going to the next world," Sharon said. "It’s hard to accept it but I needed to believe in something bigger than the moment. I needed to believe that there had to be a reason of why my son was not with us anymore. It’s very painful and I wanted to try to understand and strengthen my spiritual connection."

“As hard as it was I chose to wake up and continue living and I wanted to do it with a purpose."

Sharon said her son's death taught her not to take any day for granted and to try to learn and grow from each experience.

"I didn’t want the pain to define who I was or who I was going to be. I knew I had a choice every morning and as hard as it was I chose to wake up and continue living and I wanted to do it with a purpose." 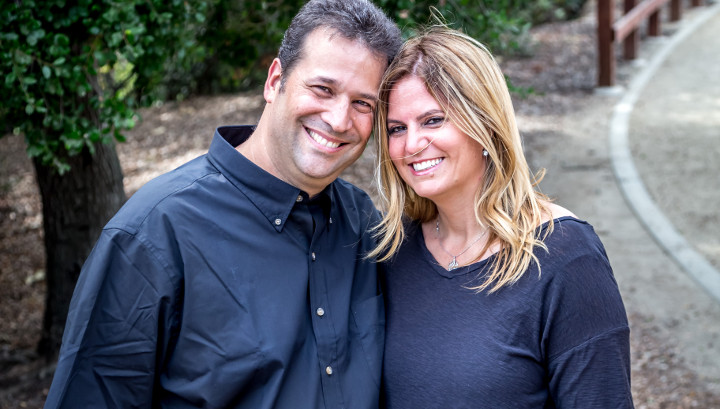 Roberto was by her side. “We have to do something,” he said. “Oscar's life had to have more meaning than this. Let’s start a non-profit.” This was a whole new world for them and Roberto bought a copy of “Non-Profits for Dummies” and began to read. 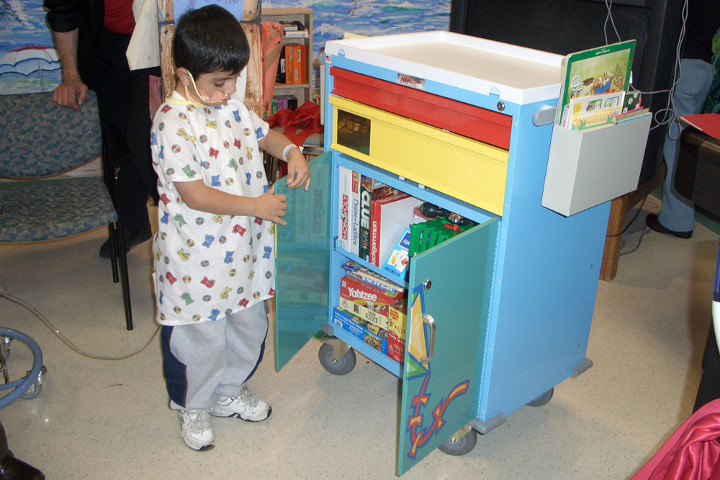 But most playrooms aren’t open 24/7. They don’t necessarily operate when the children – or their parents – need them. So Sharon came up with the idea of a Mobile Playroom, adapting hospital crash carts for this purpose. The toys are brought to the kids instead of the kids having to go to them. They are great for small hospitals with no playrooms and good for large ones with lots of patients as well. Sharon has one simple goal: “I really want to make kids happy.”

Children's Hospital of LA loved the project and the plan grew. Roberto and Sharon established The Oscar Litwak Foundation, with the goal of placing at least one mobile crash cart in every hospital that needs one. Initially Sharon was calling hospitals to tell them about this amazing opportunity. But the word has spread and hospitals now call them. They come full of toys with a three-year commitment to restocking. Most of the toys are donated according to age, types (toys, books, arts and crafts) and language requested. It costs $2000 to fully sponsor a cart.

The Litwak family goes at least once a month to the foundation to put the carts together. This is a job done solely by volunteers and the overhead for the organization is minimal. The enthusiasm for this project has spread to the kids. For Andrea’s Bat Mitzvah, she created “distraction bags” which are distributed through the foundation. It costs $10 to sponsor a bag and they can just show up at at the hospital with them, skipping all the bureaucracy.

Sharon says she sometimes overhears her children saying, “Kids need to be kids and kids need to play,” and she knows the message has taken.

But that wasn’t quite enough for the Litwaks. They wanted to add more meaning to their lives. In 2013, Sharon began taking classes to deepen her understanding of Judaism. In 2016, she went on a women’s learning mission to Israel and she returned the following year as a madricha. Her studies are enriching and enhancing their lives and complementing the meaning they discovered through their foundation. Sharon has once again taken her incredible those Tiger Mom qualities she acquired and is using them to encourage other women to learn, grow, visit Israel and keep moving forward. And of course, she and Roberto are dedicated to raising their children, Andrea, 15, Jessica, 12 and Ilana, 10. Their kids may not yet realize how special their parents are. But the rest of us sure do.

"Remember You Are a Jew!": Inspiring True Story