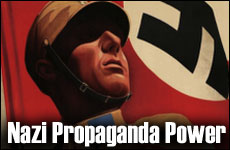 Hitler played heavily on the anti-Semitism already rooted within his people. He resurrected ideas that a previous German king, Frederick the Great, had introduced distinct categories of human beings. Essentially, the Germans were Aryans, and everyone else was sub-human. Hitler took these ideas and embellished them. He blamed the Jews for "two great wounds upon humanity: "Circumcision on the body and conscience on the soul."

As Hitler gained popularity, his hatred of Jews spread and became a rallying cry. 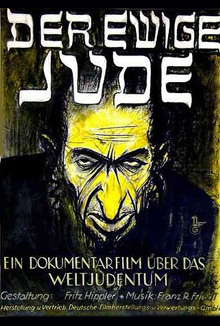 The Nazi propaganda paper, Der Sturmer, revived the "Blood Libels." The church warned its constituents: "Watch your children 6-7 weeks before Passover… Everyone knows that just before Passover Jews need the blood of a Christian child, maybe, to mix in with their matzah."

Der Sturmer ran contests encouraging German children to write in. One little girl wrote, "People are so bothered by the way we’re treating the Jews. They can’t understand it, because [Jews] are God’s creatures. But cockroaches are also God’s creatures, and we destroy them."

The anti-Jewish propaganda machine was led by Dr. Joseph Goebbels, head of Germany's Ministry of Public Enlightenment and Propaganda. One of his creations was The Eternal Jew, a 1940 film which portrays Jews as uncivilized and parasitic – poorly dressed, dirty, sickly and malformed.

The film juxtaposes images of ghetto Jews with images of rats emerging from a sewer. The narrator describes Jews as the "vermin of the human race":

Where rats appear, they bring ruin by destroying mankind's goods and foodstuffs. In this way, they spread disease, plague, leprosy, typhoid fever, cholera, dysentery, and so on. They are cunning, cowardly and cruel and are found mostly in large packs. Among the animals, they represent the rudiment of an insidious, underground destruction – just like the Jews among human beings.

Using these propaganda methods, the German public was trained to support murderous activities against the Jews.

"The Toadstool" is a Nazi children's book designed to teach hatred of Jews. It was put out by Julius Streicher, the publisher of Der Stürmer who specialized in anti-Semitic propaganda. He was convicted in the Nuremberg trials, 1946, and executed for his role in the Holocaust.

A mother and her young boy are gathering mushrooms in the German forest. The boy finds some poisonous ones. The mother explains that there are good mushrooms and poisonous ones, and, as they go home, says: 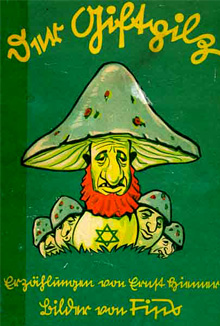 "Yes, Mother," Franz replies. "I understand that in dealing with bad people trouble may arise, just as when one eats a poisonous mushroom. One may even die!"

"And do you know, too, who these bad men are, these poisonous mushrooms of mankind?" the mother continued.

Franz slaps his chest in pride: "Of course I know, mother! They are the Jews! Our teacher has often told us about them."

The mother praises her boy for his intelligence, and goes on to explain the different kinds of "poisonous" Jews: the Jewish peddler, the Jewish cattle-dealer, the kosher butcher, the Jewish doctor, the baptized Jew, and so on.

"However they disguise themselves, or however friendly they try to be, affirming a thousand times their good intentions to us, one must not believe them. Jews they are and Jews they remain. For us, they are poison."

Just as a poisonous mushroom can kill a whole family, so too one Jew can destroy a whole city.

"Yes, my child! Just as a single poisonous mushroom can kill a whole family, so a solitary Jew can destroy a whole village, a whole city, even an entire Volk."

"Tell me, Mother, do all non-Jews know that the Jew is as dangerous as a poisonous mushroom?"

"Unfortunately not, my child. There are millions of non-Jews who do not yet know the Jews. So we have to enlighten people and warn them against the Jews. Our young people, too, must be warned. Our boys and girls must learn to know the Jew. They must learn that the Jew is the most dangerous poison-mushroom in existence. Just as poisonous mushrooms spring up everywhere, so the Jew is found in every country in the world. Just as poisonous mushrooms often lead to the most dreadful calamity, so the Jew is the cause of misery and distress, illness and death."

The author then concludes this story by pointing the moral:

The Rescue of Bulgarian Jewry
Is Grease the Word?
Dried Fruit Compote
Scientific Curiosity and the Divine Encounter
Comments
MOST POPULAR IN Holocaust Studies
Our privacy policy
Aish.com Is Looking for Great Writers