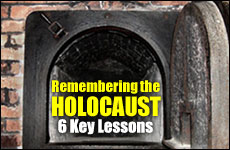 Indifference in the face of evil is complicity with evil.

From the keynote address at the Holocaust commemoration in the historic Salle des Assemblées of the European Headquarters of the United Nations in Geneva.

Whenever I speak on the Holocaust I do so with a certain degree of humility, and not without a deep sense of pain.

For I am reminded of what my parents taught me while still a young boy – the profundity and pain of which I realized only years later – that there are things in Jewish history that are too terrible to be believed, but not too terrible to have happened; that Oswiencim, Majdanek, Dachau, Treblinka – these are beyond vocabulary. Words may ease the pain, but they may also dwarf the tragedy. For the Holocaust was ly evil in its genocidal singularity, where biology was inescapably destiny, a war against the Jews in which, as Nobel Peace Laureate Professor Elie Wiesel put it, "not all victims were Jews, but all Jews were victims".

Lesson 1: The Importance of Holocaust Remembrance

The first lesson is the importance of Zachor, of remembrance itself. For as we remember the six million Jewish victims of the Shoah – defamed, demonized and dehumanized, as prologue or justification for genocide – we have to understand that the mass murder of six million Jews and millions of non-Jews is not a matter of abstract statistics.

For unto each person there is a name – unto each person, there is an identity. Each person is a universe. As our sages tell us: "whoever saves a single life, it is as if he or she has saved an entire universe." Just as whoever has killed a single person, it is as if they have killed an entire universe. And so the abiding imperative – that we are each, wherever we are, the guarantors of each other's destiny.

Lesson 2: The Danger of State-Sanctioned Incitement to Hatred and Genocide – The Responsibility to Prevent

The enduring lesson of the Holocaust is that the genocide of European Jewry succeeded not only because of the industry of death and the technology of terror, but because of the state-sanctioned ideology of hate. This teaching of contempt, this demonizing of the other, this is where it all began. As the Canadian courts affirmed in upholding the constitutionality of anti-hate legislation, "the Holocaust did not begin in the gas chambers – it began with words". These, as the Courts put it, are the chilling facts of history. These are the catastrophic effects of racism.

We are witnessing a state-sanctioned incitement to genocide in Ahmadinejad's Iran.

Forty years later, in the Nineties, these lessons not only remained unlearned, but the tragedy was repeated. For we witnessed, yet again, a growing trafficking in state-sanctioned hate and incitement, which in the Balkans and in Rwanda took us down the road to genocide.

And as we meet, we are witnessing yet again, a state-sanctioned incitement to hate and genocide, whose epicenter is Ahmadinejad's Iran – and I distinguish President Ahmadinejad from the people of Iran, many of whom have themselves repudiated his remarks. For President Ahmadinejad denies the Nazi Holocaust as he incites to a Middle Eastern one – an assault on Jewish memory and truth in its denial of the Holocaust, which the U.N. General Assembly rebuked several days ago; and a violation of the prohibition against the "direct and public incitement to genocide" in the Genocide Convention, which U.N. Secretaries-General Kofi Annan and Ban Ki-Moon respectively called "shocking" and "unacceptable", indeed, an assault on the very U.N. charter, which prohibits such incitement and threat.

Lesson 3: The Danger of Silence, the Consequences of Indifference – The Duty to Protect

The genocide of European Jewry succeeded not only because of the state-sanctioned culture of hate and industry of death, but because of crimes of indifference, because of conspiracies of silence.

We meet today in the majestic Salle des Assemblées of the former League of Nations. It was here that Ethiopian Emperor Haile Selassie pleaded in vain for protection from Mussolini's 1935 aggression. Fascism marched ahead, winning one victory after another. It was here that while the gathering storm of war advanced, with Czechoslovakia surrendering to Hitler in 1938, further appeals for protection went unheeded. The response was international indifference, a failure of moral resolve, and the result was world war and genocide.

We are assembled here on the banks of Lake Geneva, on the other side of which lies Evian-des-Bains. It was here in 1938 that the international community considered the plight of hundreds of thousands of Jewish refugees desperate to flee worsening persecutions in Nazi Germany and Austria. But the nations looked away. As it was said at the time, the world was divided into those places where the Jews could not live, and those places where they could not enter. Hitler drew his lessons.

As we gather here today to commemorate the Holocaust in this historic Assembly Hall, with the representatives of the international community and civil society, let us pledge that never again will we be indifferent to aggression, hatred and incitement.

And indeed we have witnessed an appalling indifference and inaction in our own day which took us down the road to the unthinkable – ethnic cleansing in the Balkans – and down the road to the unspeakable – the genocide in Rwanda – unspeakable because this genocide was preventable. No one can say that we did not know. We knew, but we did not act, just as we know and have yet to act to stop the genocide by attrition in Darfur, ignoring the lessons of history, betraying the people of Darfur, and mocking the Responsibility to Protect doctrine.

In our world, few people are prepared to take a stand, let alone be counted.

And so, it is our responsibility to break down these walls of indifference, to shatter these conspiracies of silence and inaction – to stand up and be counted and not look around to see whoever else is standing before we make a judgment to do so; because in the world in which we live, there are few enough people prepared to stand, let alone be counted, reminding us of the words of Edmund Burke, "the surest way to ensure that evil will triumph in the world is for enough good people to do nothing".

Lesson 4: Combating Mass Atrocity and the Culture of Impunity – The Responsibility to Bring War Criminals to Justice

If the 20th Century – symbolized by the Holocaust – was the age of atrocity, it was also the age of impunity. Few of the perpetrators were brought to justice; and so, just as there must be no sanctuary for hate, no refuge for bigotry, there must there be no base or sanctuary for these enemies of humankind. In this context, the establishment of the International Criminal Court must be seen as the most dramatic development in international criminal law since Nuremberg – to deter mass atrocity, to protect the victims, and to prosecute the perpetrators.

Lesson 5: The Responsibility to Talk Truth to Power

The Holocaust was made possible, not only because of the "bureaucratization of genocide", as Robert Lifton put it, but because of the trahison des clercs – the complicity of the elites – physicians, church leaders, judges, lawyers, engineers, architects, educators, and the like. Indeed, one only has to read Gerhard Muller's book on "Hitler's Justice" to appreciate the complicity and criminality of judges and lawyers; or to read Robert-Jan van Pelt's book on the architecture of Auschwitz, to be appalled by the minute involvement of engineers and architects in the design of death camps, and so on. Holocaust crimes, then, were also the crimes of the Nuremberg elites. As Elie Wiesel put it, "Cold-blooded murder and culture did not exclude each other. If the Holocaust proved anything, it is that a person can both love poems and kill children".

And so it is our responsibility to speak truth to power, and to hold power accountable to truth. And those entrusted with the education and training of the elites should ensure that Elie Wiesel is studied in schools of law and not just in classes of literature; that the double entendre of Nuremberg – of Nuremberg racism as well as the Nuremberg Principles – is part of our learning as it is part of our legacy; that Holocaust education underpin our perspective as it informs our principles – on justice and injustice.

Lesson 6: The Vulnerability of the Powerless – The Protection of the Vulnerable as the Test of a Just Society

The genocide of European Jewry occurred not only because of the vulnerability of the powerless, but also because of the powerlessness of the vulnerable. It is not surprising that the triage of Nazi racial hygiene – the Sterilization Laws, the Nuremberg Race Laws, the Euthanasia Program – targeted those "whose lives were not worth living"; and it is not unrevealing, as Professor Henry Friedlander points out in his work on "The Origins of Genocide", that the first group targeted for killing were the Jewish disabled – the whole anchored in the science of death, the medicalization of ethnic cleansing, the sanitizing even of the vocabulary of destruction.

And so it is our responsibility as government representatives – and, morally, as citizens of the world – to give voice to the voiceless, as we seek to empower the powerless – be they the disabled, the poor, the refugee, the elderly, the women victims of violence, the vulnerable child – the most vulnerable of the vulnerable.

May I close with a word to the survivors of the Holocaust – for you are the true heroes of humanity. You witnessed and endured the worst of inhumanity, but somehow you found in the depths of your own humanity the courage to go on, to rebuild your lives as you have built your communities. And so it is with you, and because of you, and because of the righteous among the nations – like Raoul Wallenberg – that we remember that each person has a name and an identity – that each person is a universe – that in saving one life we save an entire universe.

We will speak and we will act against racism, against hate, against anti-Semitism, against mass atrocity, against injustice – and against the crime of crimes whose name we should even shudder to mention – genocide.

May this day be not only an act of remembrance, which it is, but let it be a remembrance to act, which it must be.

A Child’s Shoe: The Story of Hinda Cohen
G-d Time
Shavuot is The Holiday of Cheesecake and Blintzes
What Does Kosher Mean Literally?
Comments
MOST POPULAR IN Issues
Our privacy policy