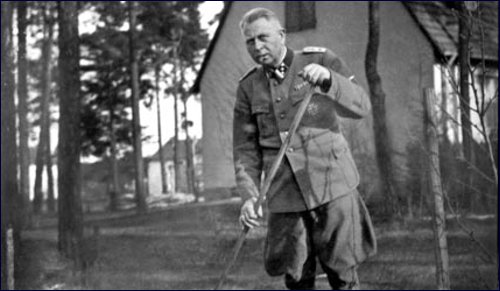 Three years ago I discovered that my grandfather was a member of the SS and arrested for crimes against humanity.

Late last year, I read an interview with a rabbi in my university city of Manchester, in which he said that things were so bad he could not see himself ending his days in Britain. I wanted to cry – how could this be happening in my own country? His words had a special resonance for me – at the time I was finishing a book about my own grandfather – an active perpetrator in the Holocaust.

My German grandfather died before I was born. My father told me that his father, Karl Niemann, was “a bank clerk, a pen-pusher.” He also told me that he was a member of the Nazi party. Out of shame, I kept that from my Jewish friends.

Three years ago while my wife prepared for a conference in Berlin a far more terrible revelation came. I decided to join her in the German capital for a short vacation. I asked my dad where he had lived during the war. I would look it up, maybe take some photos of the house for him. I checked online for any information about the street itself. 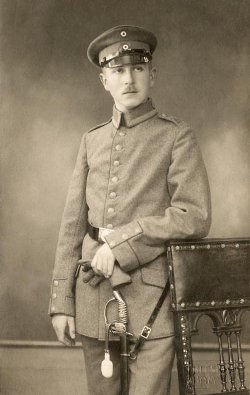 While I was searching a page came up bearing the words: SS Hauptsturmführer Karl Niemann… crimes against humanity… use of slave labor.

I was to discover that in May 1945 my grandfather was arrested in the Alps by American soldiers and imprisoned in former POW camps for three years. My family closed that sordid chapter in their lives and never spoke about it again. But as a 50-year-old writer, I had a compulsion to dig into this new-found truth and to write about it. I trawled archives, went to concentration camps, spoke to Holocaust historians and relatives and began to piece together the story – not just of Karl Niemann, but also that of my family, who had been living a life in Berlin that was both bizarre and frighteningly ordinary.

My grandfather oversaw slave labor and the factories he visited were the likes of Auschwitz, Dachau, Buchenwald and Sachsenhausen.

My dad had vivid recollections of a childhood in which he saw much but understood little. During the war, his father was always going on ‘business trips’. No sooner was he back than he was preparing to go off again. The reality was that he was an overseer of slave labor and the factories he was visiting were the likes of Auschwitz, Dachau, Buchenwald and Sachsenhausen.

SS officers requisitioned inmates to do odd jobs around the house. My dad remembered men wearing “dirty grey striped uniforms, with ‘Jude’ written on the back”. They brought furniture, mended clothes, made bunk beds and an air raid shelter in the garden. His mother gave them coffee and cake. They told her they liked coming to her house. The children played in bomb craters: it was a million miles from the murderous regime in which their father was a working participant. 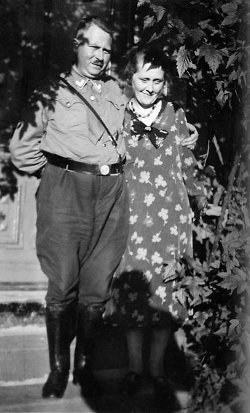 Karl pictured in his Nazi Party uniform
with wife Minna, 1933.

Just how much did my grandfather know of the Holocaust and what was his involvement? In the last weeks of the war, he was one of four officers ordered to relocate with their families from Berlin to the Alps. The entourage stopped for two or three nights at Dachau on the way and my dad recalled overhearing a heated conversation between his parents as they looked out over a low building with a tall smoking chimney. His mother said: “You know what they’re doing there? They’re killing the Jews and burning their bodies.” His father was emphatic: “No, they wouldn’t do that,” he insisted.

There is simply too much contrary evidence for his denial to be credible. At his tribunal in 1948, the prosecution lacked incriminating papers that were being used at the time to help hang Karl’s boss, Oswald Pohl, the overall controller of concentration camps. Auditor Karl Niemann had produced accounts for the year 1942, in which he bemoaned the ‘loss’ of 8,000 workers from Majdanek. Eight thousand Jews had been taken out and shot – and Karl had written down the exact date of their killing.

He claimed he had never been to Auschwitz – yet it was the SS’s second biggest ‘factory’ and a Holocaust historian told me that it was inconceivable that he would never have visited it. And how could he have gone to camp after camp, and not seen all the signs of torture, the skeletal figures, breathed the smell of death? My grandfather found inmates to testify on his behalf that he had not physically abused anyone. What of the passive acceptance that allowed him to work for the SS for 10 years?

Most disturbing of all were the comments from the presiding judge that Karl Niemann, presented with the facts, showed no sign of contrition for his part in the enslavement and brutal treatment of innocent people.

It was hard to be objective. There were times when I hated my grandfather. There was a brief window – when I discovered that he had been working deals with the Gestapo to have inmates released – that I thought he might have been another Oskar Schindler. But in the end, I accept he was a flawed individual and look elsewhere for positives.

“I find this hard, but it is true, and you must tell it all.”

And there are positives to come out of this dreadful story. There is my family’s reaction to the book’s publication, most notably my uncle, still living in Germany, who read a draft and told me: “I find this hard, but it is true, and you must tell it all.”

A guiding light has been one Bernhard Gelderblom, whose own father died an unrepentant perpetrator. Bernhard has dedicated his retirement to teaching children in local towns and villages about the lives of Jewish communities before the Nazis came. He inspired people in these places to restore Jewish cemeteries smashed during Kristallnacht.

Throughout this process, I have been shaken, not by hostility, but by kindness. It seems that those closest to the Holocaust are girdled with compassion. Archivists have looked into my heart and said in soft voices: “It’s not your fault.” A lady who had lost family at Auschwitz even said: “Your grandfather probably couldn’t help it.” Kind words indeed, but for the sake of truth, I must value honesty above everything. 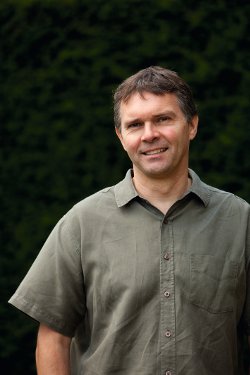 As Holocaust survivors pass away, I understand that I and others in my position have a role. As the grandson of a Nazi criminal, I can say to young people, this is what has happened, but I do not share my grandfather’s beliefs, I do not agree with what he has done. In the weeks since my book was published, I have found others who have been given a similar legacy to me and also want to carry a torch against hatred and bigotry.

I was deeply moved to be asked by Aish.com to write this article. The fact that it is possible speaks volumes for the willingness of good people, regardless of faith, to find understanding and common humanity.

A Nazi in the Family by Derek Niemann, was published by Short Books in March 2015 and is available as an e-book. Click here to order.

The Last Two Nazis on Trial
It Takes A Lot Of Faith To Be An Atheist
How Instagram Brought Back This Nostalgic Soup
What Makes Eli Run?
Comments
MOST POPULAR IN Current Issues
Our privacy policy